Advanced Micro Devices (AMD) is poised to release earnings tomorrow after the close, and the stock will need renewed strength to return the share price near elevated levels. AMD stock is up 23% from this time last year, but it has not had a good start to 2022. AMD shares are down 27% so far this year.

Having topped out at $164 on November 30, the stock closed Friday at $105.24. The semiconductor space has benefitted from limited supplies and huge demand, which helped drive 2021’s outperformance. So far 2022 has seen a transition from high growth tech into more defensive, value-orientated stocks. This may change as Apple began a positive string of big tech earnings that ramps up this week. Along with AMD, we have Amazon (AMZN), Google (GOOGL) and Meta Platforms (FB).

AMD did receive some good news last week with the announcement that China had approved its deal for Xilinx (XLNX). The deal had already won approval from US regulators, but the Chinese announcement was welcomed by investors. The China State Administration for Market Regulation gave the deal conditional approval. The deal is now expected to close in this quarter. China did put some conditions on the deal by asking AMD not to discriminate against Chinese clients and keep supplying Xilinx products to China, according to Bloomberg.

Xilinx (XLNX) had reported strong earnings last week. Earnings per share (EPS) reached $1.29, well ahead of estimates for $0.95. Revenue was also well ahead at $1.01 billion compared with estimates for $957 million.

AMD has benefitted from the lockdown boom in home computing, gaming and cloud use. We have witnessed already this lockdown trade unraveling, so AMD earnings will need to show continued growth. PC growth has already slowed as the lockdowns ended, and we expect gaming to also slow. However, cloud services should remain in demand and AMD has had some notable tailwinds from the likes of IBM and Amazon. IBM announced strong results led by its cloud division last week. IBM has been using AMD EPYC chips to help power its cloud services.

Holding $100 is not only psychological but also important, as below $100 is a volume gap. Volume gaps mean price discovery is not strong and often lead to price gaps or price accelerations. AMD has already broken and closed below the 200-day moving average at $109, so this will be the first resistance. Good results should allow the stock to stabilize. The current price zone from $100 to $110 is a high volume zone and an area of consolidation from back in August until early November. This is strong support. The recent weakness should allow good earnings to be rewarded. 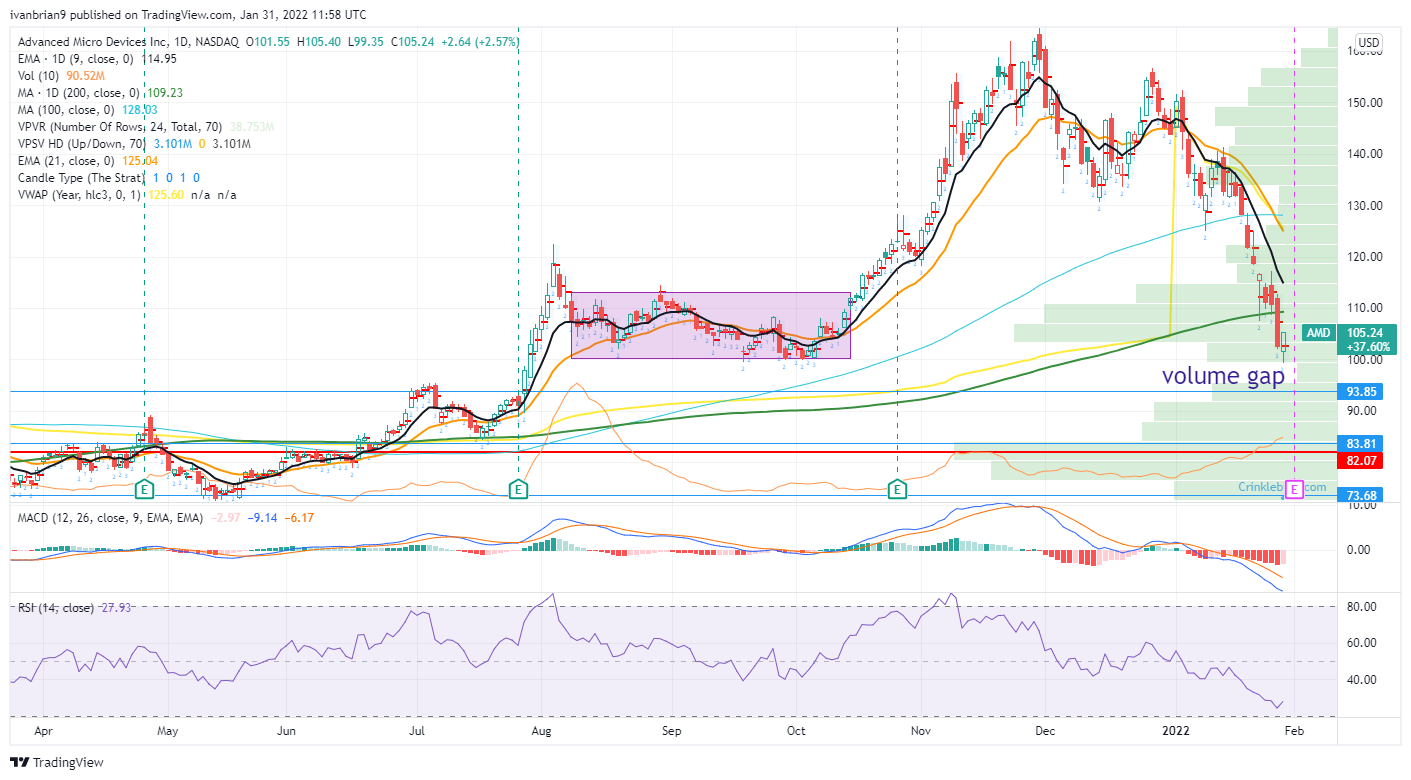