Advanced Micro Devices (AMD) helped to turn sentiment around toward the tech sector as it unveiled a strong set of earnings after the close on Tuesday. The previous sector earnings reports had not been quite so positive with Intel (INTC) seeing tough times ahead on the demand front as it cited growing inflationary pressures. More of the same than was expected from AMD but it pleasantly surprised investors.

Advanced Micro Devices posted earnings per share of $1.13 after the close which compared favorably with the $0.91 estimate. Revenue was $5.88 billion again beating the $5.57 estimate. Revenue was up over 70% versus the same quarter last year with a strong performance from the computing and graphics business. AMD CEO Lisa Su said the Xilinx acquisition was a game-changer for AMD. The acquisition was only completed recently and so the contribution from Xilinx was limited to six weeks, but already that amounted to $559 million in revenue terms. “Xilinx can’t be overstated…It significantly expands our product and technology portfolio,” said Su on the post-earnings conference call. Also of note was the increase in guidance for second-quarter revenue to $6.5 billion at the midpoint of its range ($6.3-6.7 billion) which is ahead of estimates for $6.33 billion.

The strong results contrast with bearish commentary from Intel CEO Pat Gelsinger last week who forecast weakness in the PC market and slowing demand. Intel (INTC) stock had fallen as much as 6% after those earnings. Intel did beat earnings and kept its forecasts for the next quarter intact, but the bearish commentary was enough to hit the stock.

The key question remains, what environment are we in for stocks? Is this a bearish environment or merely a correction? Few stocks can outperform a bearish environment so it is always important to know your investing environment. The Fed will give more clues. AMD stock though remains locked into a long-term downtrend. So can these earnings turn the sentiment around or is this rally merely a blip? Trying to go against trends is always a dangerous game.

$100 is the key psychological level here and that would clearly end the bearish trend. That would also fill the gap from April 11. The weekly chart shows us how key support at $73.68 is. A huge volume gap below could see a sudden acceleration to $59.42. $100 here too is clearly a pivot, below more losses are likely for AMD stock.

$73 to $93 was the range for most of 2021. Breaking out of either side will set the trend for the remainder of the year. Break above $93 and the draw of $100 will be powerful. This then should see AMD stock push higher and even test all-time highs. Failure to hold $73 will likely see a quick more to $59 as mentioned. The picture is not clear but the longer AMD share price can stabilize then the more likely it is to test higher based on these earnings. 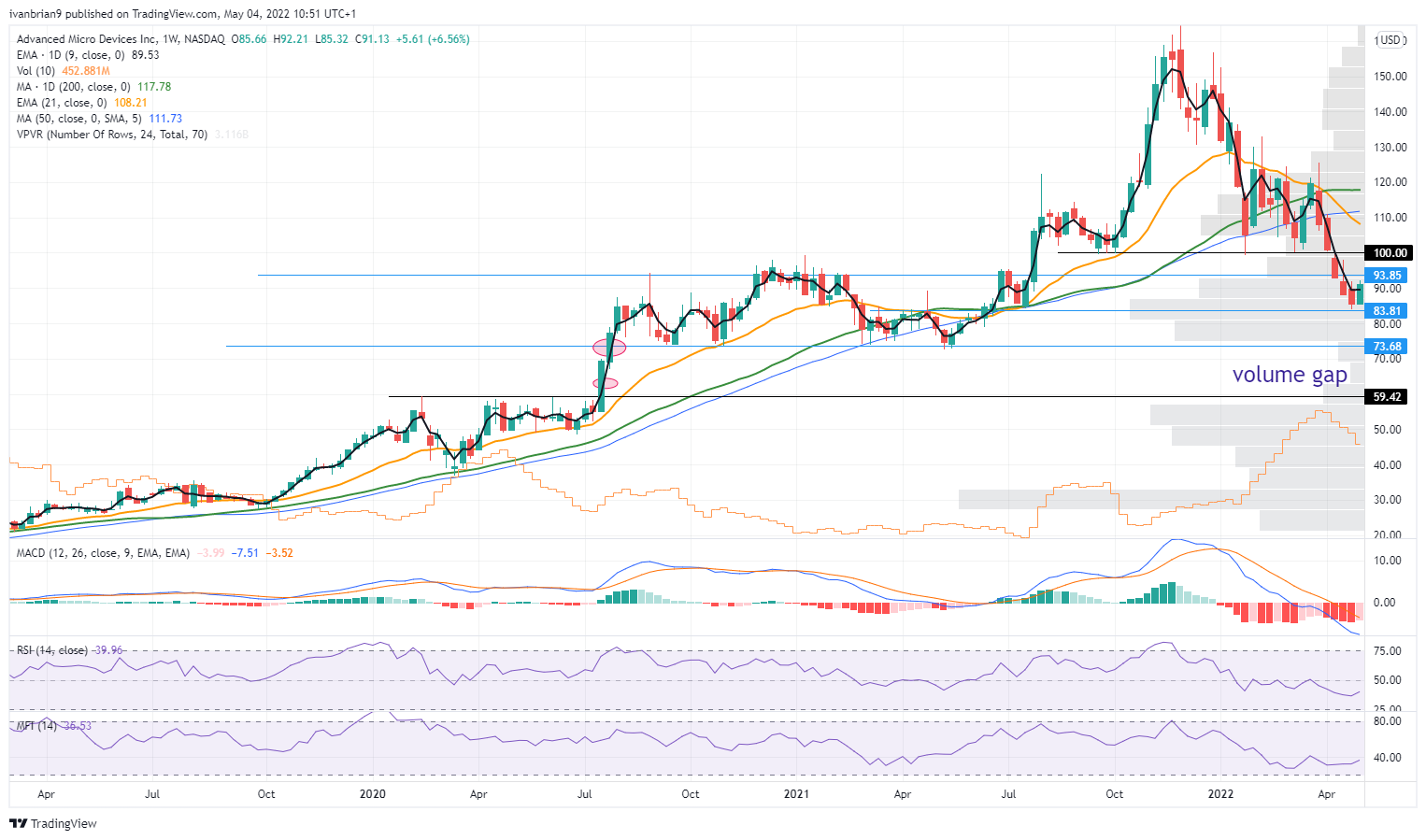