Update: AMC extended the previous advance and hit fresh four-day highs at $20.58 on Wednesday before retracing sharply to end the day at $19.67, still up 0.98% on the day. The market mood remained tentative amid lingering worries over the Russia-Ukraine conflict and the January FOMC minutes, which failed to offer any clarity on the upcoming March rate hike. Last week, the theatre chain and meme stock said that it hired a veteran consumer products executive to try to boost its business of selling its popcorn at retail stores, not just in theaters.

AMC Entertainment (AMC) is back and trending heavily on social media this morning after an impressive surge on Tuesday. The meme stock favorite closed at $19.48 for a gain of 9.75%. Other meme and retail stocks also benefited on Tuesday. Growth names also rose while value stocks lagged on an improved outlook for Russia-Ukraine tensions.

To be fair, it is not all geopolitically-related, although we still think that represents the bulk of gains. AMC did also announce on Monday that it had completed its $750 million capital raise through senior unsecured notes. This improved the balance sheet for AMC as its extended out maturities and reduced interest payments and coupons on some of its debt. AMC CEO Adam Aron said the company is still looking for other ways to reduce its interest payments and strengthen its balance sheet. We had previously noted that Moody’s had upgraded its outlook for AMC on the new debt restructuring.

Also of note, but probably not as significant to the balance sheet, is that AMC has reached an agreement to open a Chicago-area multiplex cinema this year. The property Evanston 12, as the name suggests, has 12 cinemas, down from 18 that the property previously had. The site was owned by Cinemark (CNE). AMC reached an agreement with GW Properties for the site.

Looking at the daily chart makes this move appear relatively insignificant. 10% is never insignificant, but the fact remains AMC is trending lower and only a break of $21.04 ends this in our view. 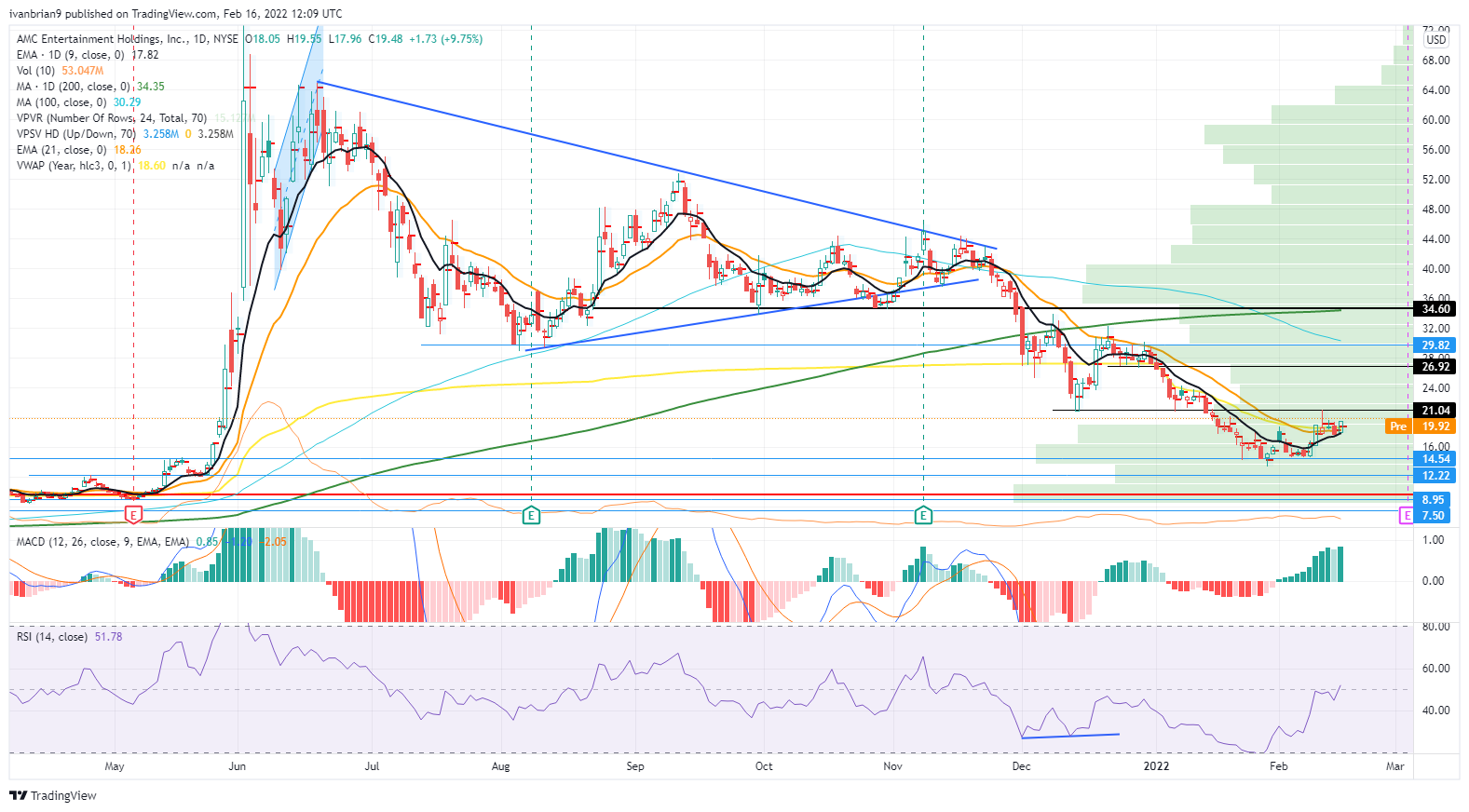 Looking in more detail at the 15-minute chart shows that the last attempt at the $21.04 resistance was swiftly rejected. AMC spent little time or volume trying to get through. $18.75 is the short-term point of control and is thus supportive. $18 has a volume gap down to $16, so beware of a sharp move if $18 breaks. 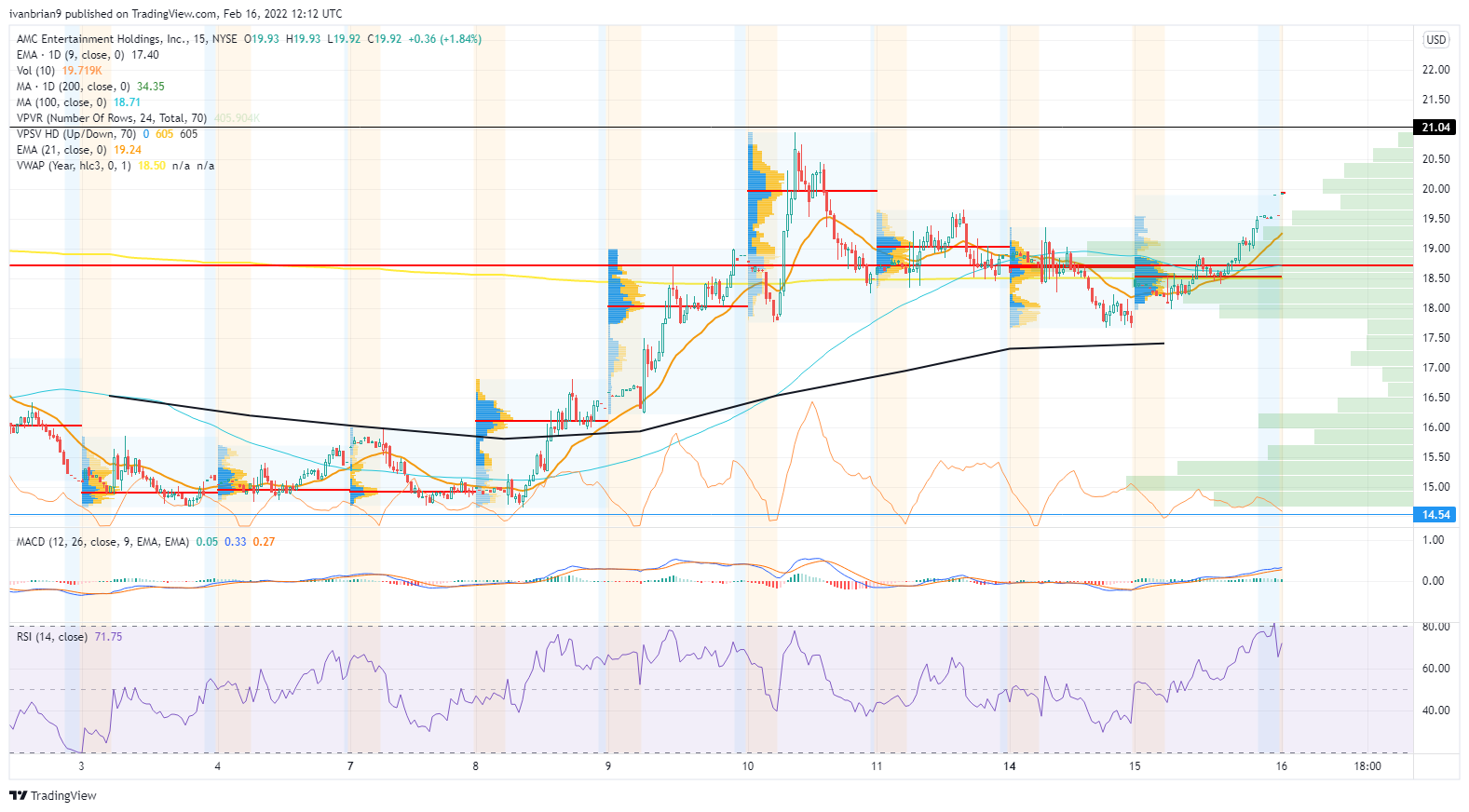 Update: AMC trades at $19.82 per share, up a modest 1.75% heading into Wednesday’s close. Wall Street spent most of the day in the red but managed to trim losses following the release of the FOMC Meeting Minutes. The document failed to provide clear clues for a March rate hike, although policymakers mentioned that they are willing to hike rates at a faster pace than that of 2015.

Update: AMC stock ricocheted back and forth at the opening on Wednesday before powering higher. At the time of writing about 40 minutes into the session, AMC is up 3.3% at $20.13. This would be the second day in a row of gains as a diplomatic focus has begun to surround the Ukraine-Russia affair. The S&P 500 is down 0.8%.