Update: AMC stock has opened nearly 2% lower on Thursday as the stock continues to disappoint investors. AMC failed to rally on Wednesday when the overall market was especially strong. Now stock sentiment is back in bears hands as the US CPI print was high and there appears to be no immediate resolution in sight to the Russia Ukraine conflict. AMC stock is currently trading at $15.28 which is already down nearly 3% after just over ten minutes of trading. This brings support at $1454 firmly into view and a break of that level could see AMC break $10. AMC apes look likely to be disappointed despite the strong Batman performance.

We had expected better things from AMC stock on Tuesday and Wednesday. Both days saw a bit more risk back into the market, but AMC failed to catch on. This was despite the perfect catalyst in the form of a strong box office for the new Batman movie. Wednesday in particular was frustrating as AMC only closed up 2%. Other retail favorite stocks such as Lucid and Rivian rose 4% on Wednesday, while Nio rose over 12%. It was left to old school WallStreetBets names AMC and Gamestop to lag the field.

Read more about another retail favorite in Nio here.

AMC CEO Adam Aron was on the wires this week trying to get things moving for AMC apes. He said The Batman movie was the third-best weekend box office since the pandemic began. He also said using crypto had worked out well and that AMC may seek to launch its own cryptocurrency in the future. This is probably a weak effort to appeal to the younger AMC apes and keep them on his side. The real problem for AMC is ironically one that AMC shareholders rejected. Raising fresh capital to pay down debt. Shareholders did not want to be diluted so did not back the plans and that has left AMC holding too much debt in a rising interest rate environment. AMC did recently tap the bond markets to restructure its debt profile. AMC Entertainment stretched its maturities out and reduced its interest rates but still needs to do more in our view. This is holding the stock back currently. Growth is no longer sufficient to mask balance sheet problems.

In response to the strong opening for The Batman, Warner Bros. has moved some of its upcoming releases to more prime slots in the calendar. DC League of Super-Pets has moved from May 20 to July 29. Black Adam was on July 29 but has now moved to October 21 in what looks like a strong weekend with Sony’s Spider-man: Across the Spider-Verse: Part 1 also slated for that weekend.

Wednesday’s move was a big disappointment. AMC stock opened at $15.72, but it closed lower, giving us a red candle for the session. Failure to push on is a big red flag without any momentum. $14.54 is now odds on to break in our view, and that will take AMC toward a test of $10. $8.95 is the next big support on the chart. $21.04 remains the key resistance. 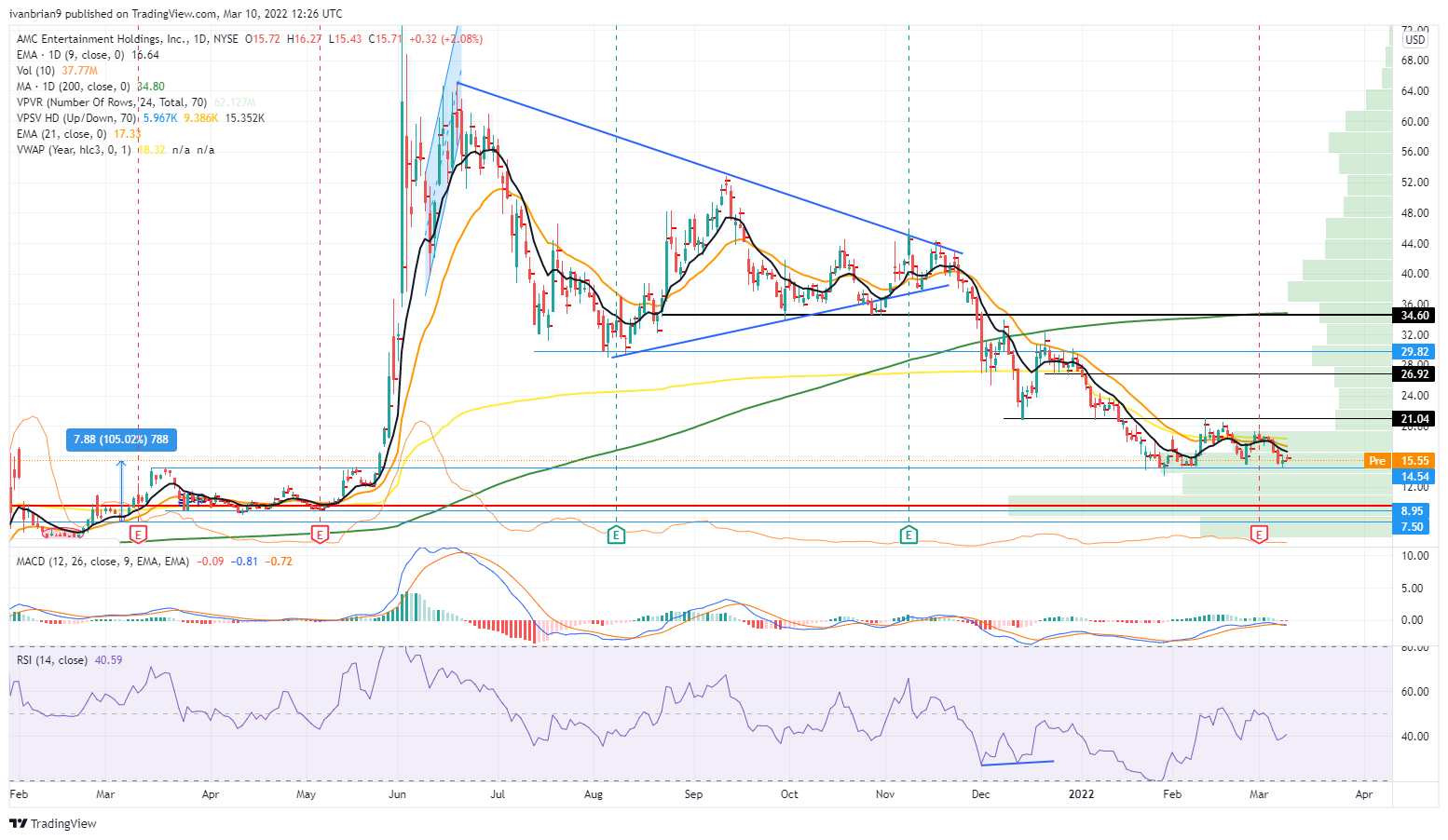 On the intraday chart below, AMC has put in a double top at $16.26. This is a bearish signal and was a warning on Wednesday. A break of $15.34 will likely see more losses on Thursday. 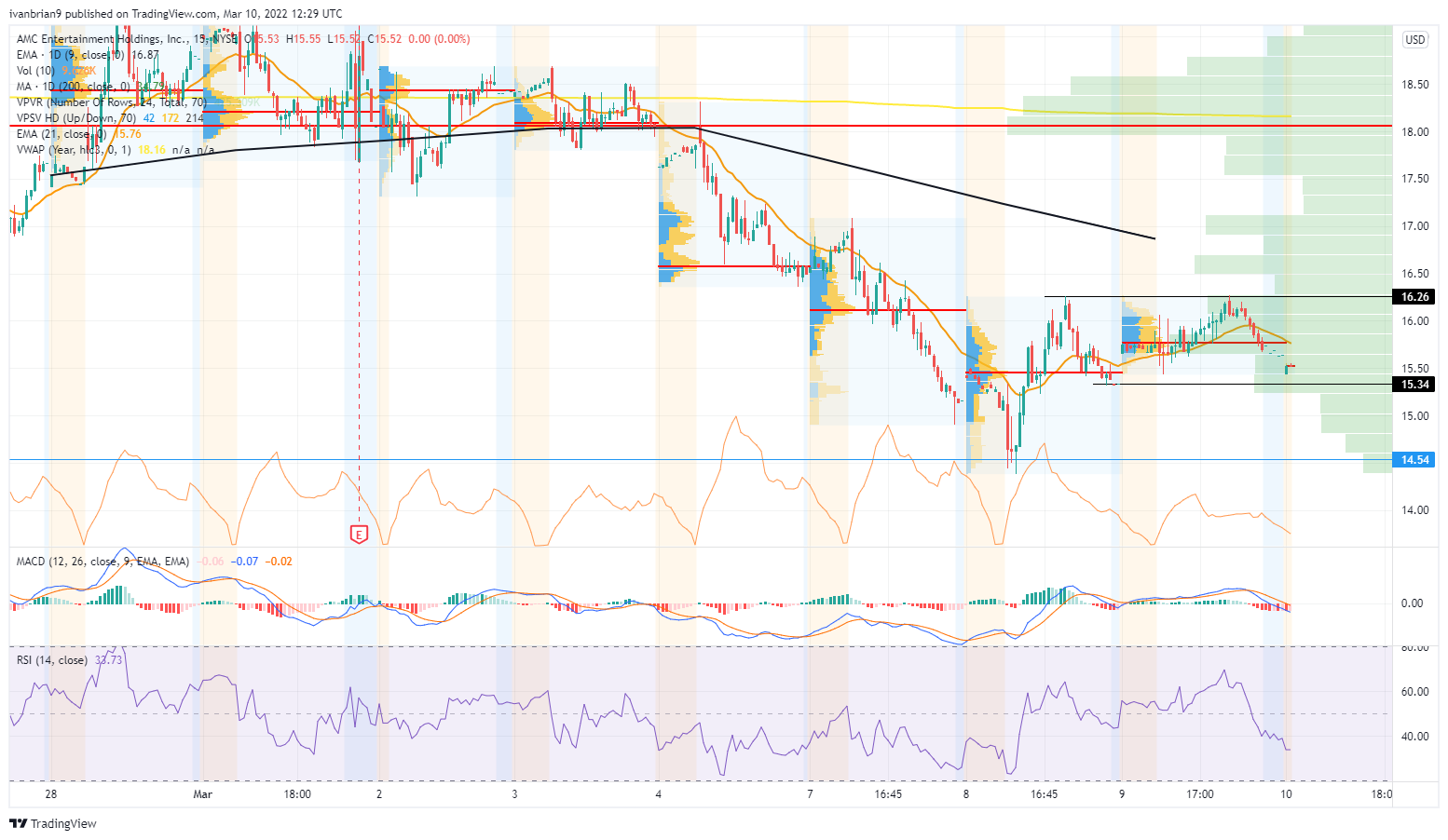