The Australian dollar reversed its Wednesday’s gains and could not hold above 0.7400, recording an 80-pip loss amid a session dominated by central bank speakers, led by Fed Chair Jerome Powell, who reiterated that a 50-bps increase for the May meeting is on the table. At the time of writing, the AUD/USD is trading at 0.7376.

The market mood of late turned dismal, as US equities are about to finish the trading session in the red. Meanwhile, US Treasury yields continue shooting higher, with the 10-year benchmark note sitting at 2.953%, up to six basis points, while the greenback staged a comeback, gaining 0.22%, sitting at 100.610.

Fed Chief Jerome Powell to discuss 50-bps increases in May

On Thursday, in an International Monetary Fund (IMF) panel, which was led by the Federal Reserve Chair Jerome Powell and the ECB President Mrs. Christine Lagarde, Jerome Powell said, “I[him] would say that 50 basis points will be on the table for the May meeting.” He added that “we [Fed] are committed to using our tools to get 2% inflation back.” Furthermore, Powell supported the idea of “front-end loading” moves if appropriate.

During the day, more Fed officials -San Francisco’s Fed Mary Daly, St. Louis President James Bullard- expressed the need to hike 50-bps in the May meeting. However, if needed, James Bullard even pushed towards a 75 bps rate hike.

Data-wise, an absent Australian docket left AUD/USD traders taking some cues from disappointing inflation data from New Zealand (NZ), which rose 6.9% y/y, lower than the 7.1% estimated, meaning that higher prices could be about to peak. On the US front, the Philadelphia Fed Manufacturing Index for April rose by 17.6, lower than the consensus at 21. At the same time, Initial Jobless Claims increased by 184K, more than the 180K estimated but almost in line with analysts’ expectations.

In the week ahead, the Australian and the US economic docket would feature S&P Global PMI Flash readings for April, including Manufacturing, Services, and Composite indices.

The AUD/USD is about to shift to a neutral-upward bias, as shown by the daily chart. Thursday’s price action reversed Wednesday’s gains forming a tweezers top candle chart pattern, usually bearish, which means that sellers overtook buyers, threatening to push prices further down. 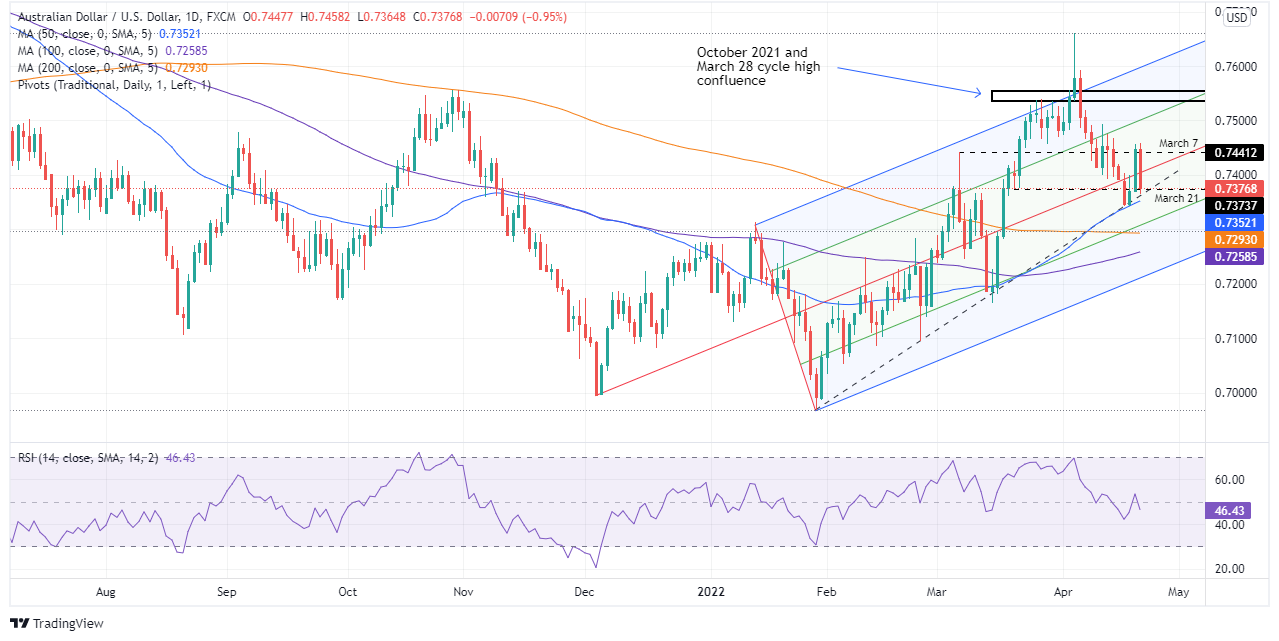