NASDAQ: DWAC looked to be on pace for a losing week during Friday’s morning session, but a late surge into the closing bell pushed the SPAC stock into the green. Shares of DWAC climbed by 5.41% and closed the trading week at $71.47. The market rebound continued on Friday as the broader markets saw the best trading week since November of 2020. All three major indices closed higher for the fourth consecutive day, as the Dow Jones added 274 basis points, while the S&P 500 and NASDAQ extended their respective hot streaks by gaining 1.17% and 2.05% respectively during the session.

Despite the late surge by DWAC, the Truth Social platform continues to struggle in its early days as an app. Lost in all of this is a noticeable absence of former President Trump who has not yet publicly commented on the rocky launch over the past few weeks. Trump and his family continue to be absent from the platform, as are most key right-wing conservative figures and politicians. It seems that a majority of them still prefer Gettr or Parler or even Twitter (NYSE:TWTR) as their primary residence on social media. 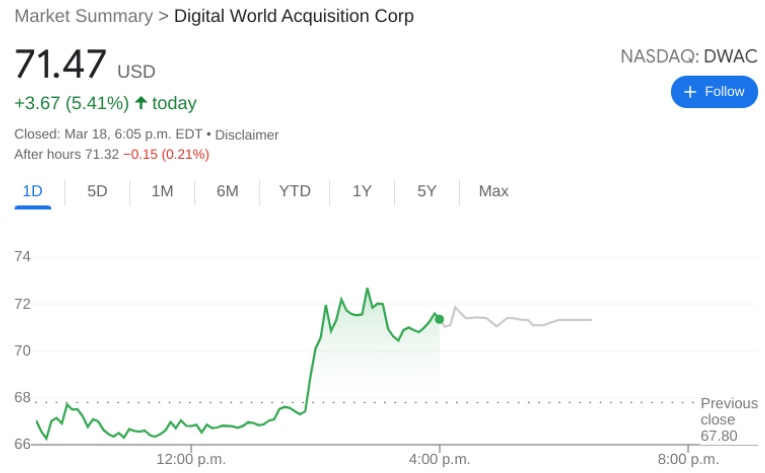 The exact date for the merger between Truth Social and DWAC is still unknown, although the last we heard it was going to take place in the first half of 2022. If Truth Social continues to fail will Trump and his company pull out of the deal? The app has had growing pains but there does seem to be interest in it from right-wing users. While the cloud computing segment and video streaming platform seem far-fetched at this point, Truth Social does still have some potential if they can get their act together.