The Euro (EUR) is almost unchanged against the US Dollar (USD) following the release of an upbeat US ISM Services PMI that underpinned the USD, while last week’s solid November US employment report shows the labor market remains tight. At the time of writing, the EUR/USD is trading at  1.0494, down by 0.40%.

US ISM Services was better than expected, weighed on the Euro

Sentiment remains deteriorated, even though China is beginning to ease Covid-19 measures. The US ISM Non-Manufacturing Index for November rose by 56.5, above estimates of 53.3, crushing October’s 54.4. According to Bloomberg, “The service sector expanded at a faster pace in November, with the holiday season bolstering business activity.” It should be noted that the price index subcomponent confirmed that inflationary pressure is skewed to the upside.

At the same time, US Factory Orders grew by 1% in November against expectations of a 0.7% increase and also smashed September’s data of  0.3%. “New orders for manufactured durable goods in October, up seven of the last eight months, increased $3.0 billion or 1.1%to $277.4 billion, up from the previously published 1% increase,” the publication further read.

Aside from this, last week’s employment report, November’s Nonfarm Payrolls (NFP) rose by 263K, beating the 200K estimates, while the Unemployment Rate, at 3.7%, remained unchanged. Average Hourly Earnings increased by 5.1%, vs. 4.9% forecasts, which would keep the US Federal Reserve (Fed) lifting rates, even if it means at 50 bps increases, as the Federal Reserve (Fed) Chair Jerome Powell said last Wednesday.

In the meantime, across the pond, S&P Global PMIs Services and Composite indices across the Eurozone remained unchanged, while the Euro area Retail Sales came worse than expected, at -1.8% MoM vs. -1.7% foreseen and -2.7% YoY, below -2.6% estimated. Additionally, several European Central Bank (ECB) officials, Villeroy and Makhlouf, backed a 50 bps rate hike in the December meeting.

From a technical perspective, the EUR/USD daily chart is neutral-upward biased after breaking above the 200-day Exponential Moving Average (EMA) at 1.0388. As the EUR/USD rose to six-month highs at 1.0594, registering successive series of higher highs, oscillators like the Relative Strength Index (RSI) and the Rate of Change (RoC) did not, so a negative divergence between price action/oscillators, emerged. 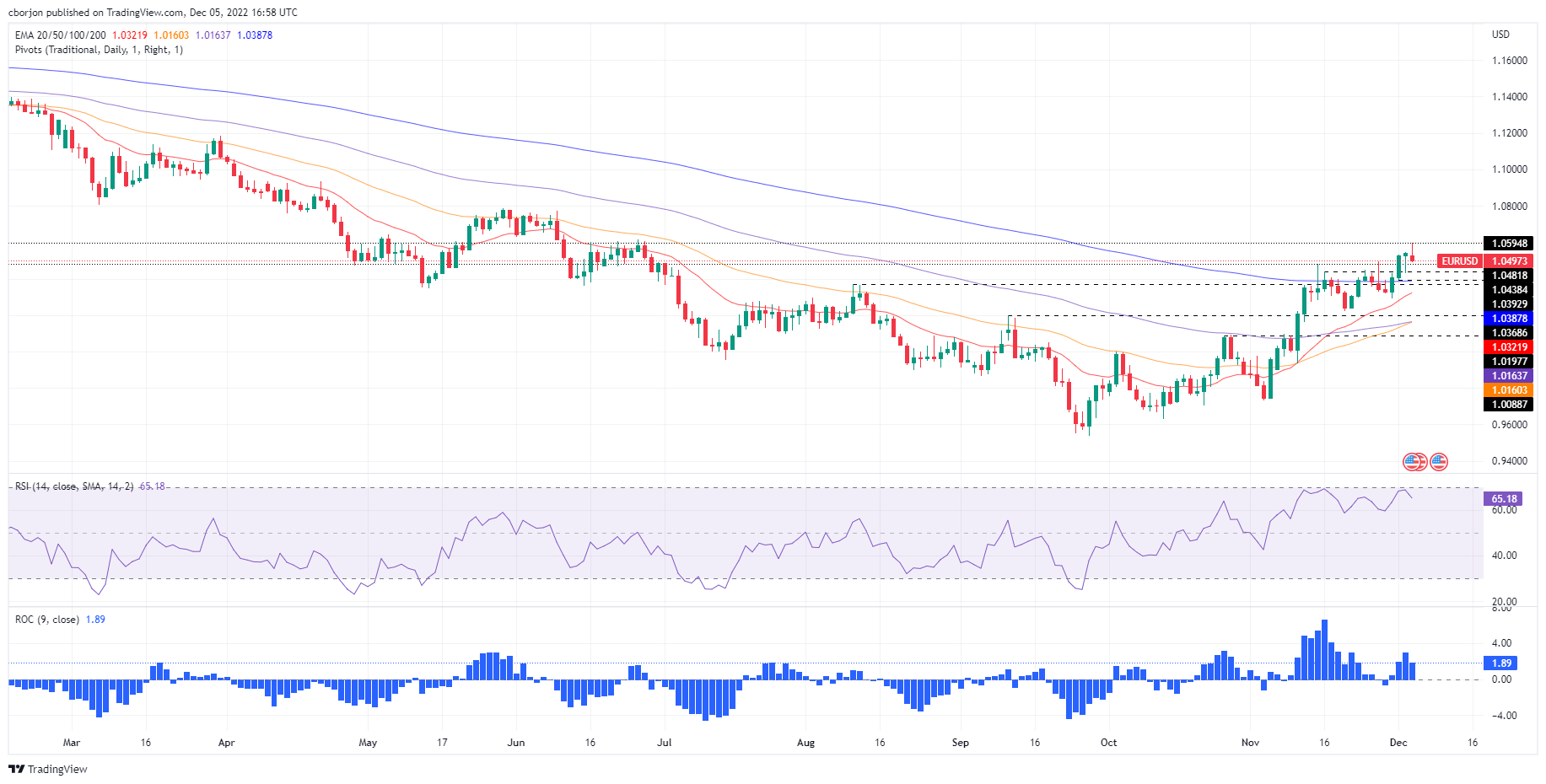