During the New York session, the British pound is recording an outstanding rally in the week, so far up almost 3%. At the time of writing, the GBP/JPY is trading at 157.07.

Risk sentiment is positive in the markets. European equities recorded gains, while US stocks are set to finish the week in the green. In the FX space, risk-sensitive currencies are up, while the laggards are the EUR and the JPY, down 0.40% and 0.50%, respectively.

Factors causing sentiment shifts are the Russia – Ukraine conflict, alongside developments surrounding the conflict, meaning Russia requested China for military and financial aid, while the US is threatening to impose sanctions on the Asian dragon.

On Friday, US President Joe Biden and Chinese leader Xi Jinping held a videoconference in which Chinese President Xi assured that China did not want a war in Ukraine. Despite that, Xi criticized the sanctions imposed on Russia, saying that “the ordinary people are the ones who suffer.”

Overnight, the GBP/JPY opened around the 156.00 mark, though pushed through the Asian session highs, stalling later around the 156.50 area. Nevertheless, once the North American session began, the cross-currency pair extended its rally towards 157.00.

The GBP/JPY is upward biased and reached a daily high near 157.22. Of late, it retreated under the 157.00 mark, but the presence of the daily moving averages (DMAs) in a bullish orderly way, well below the spot price, confirms the direction of the trend, which is upwards.

That said, the GBP/JPY first resistance would be 157.00. Breach of the latter would expose the confluence of a six-month-old downslope trendline and February 18 daily high at 157.29, followed by 158.00-06 area, which confluences with the YTD high. 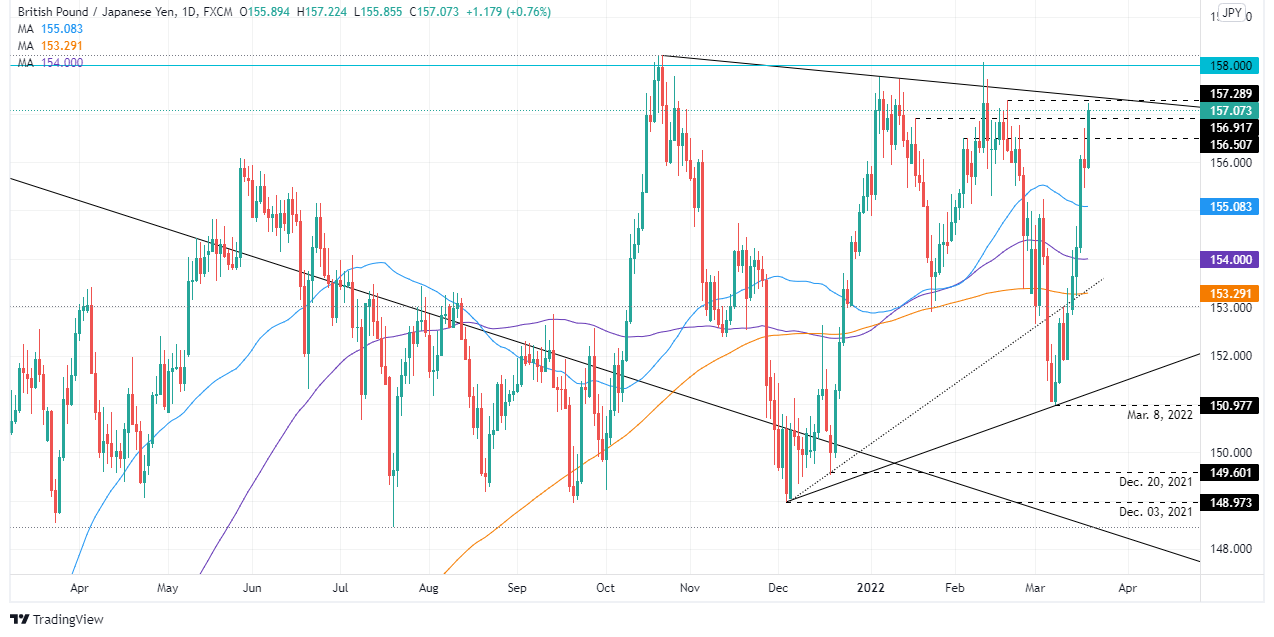