Ahead of a five-hour FX market closure lasting between 1800GMT and 2300GMT due to the Thanksgiving holiday in the US, GBP/USD is trying to tentatively regain some composure. The pair had hit fresh annual lows just to the north of the 1.3300 level earlier on during Thursday’s session but has since bounced to the 1.3320s.

On the day, the pair is now flat. The tone of Brexit developments seems to be tacking a tone for the worse again. A UK government spokesperson on Wednesday evening said that the UK PM had told the Irish PM that he was concerned about a substantial gap that remained between the UK and EU on the implementation of the Northern Ireland Protocol.

Meanwhile, the French Fishing Association Body was scathing of the UK on Thursday, saying that they had still not got what they wanted regarding licenses. The body said that French fishermen would be taking action on Friday to block French ports and the Channel tunnel. The blockades will disrupt UK/EU trade and are likely to exacerbate the supply chain disruptions already plaguing the UK economy.

Data from the ONS released earlier in the morning showed that 14% of businesses in the UK had reported a shortage of workers in late November. Further evidence of a strong UK labour market likely increases the chances that the BoE will hike interest rates by 15bps to 0.25% next month and this might be helping to negate the impact of negative Brexit newsflow for GBP.

But UK money markets don’t seem to have viewed the ONS data this way. Three-month sterling LIBOR futures for December 2021 (a proxy of the market’s expectations of the BoE’s Bank Rate next month) rose to their highest since late September on Thursday at 99.820, up from 99.765 at the start of the week. That implies markets only anticipate about 8bps of rate hikes next month, or are only pricing slightly above a 50% chance that the bank will hike rates.

Sterling losses have further to run

If the BoE does disappoint expectations next month by refusing once again to hike interest rates, then GBP will see a negative reaction as hawkish bets are unwound. Though GBP/USD has come under heavy selling pressure in recent weeks and is down 2.6% on the month, the pair isn’t yet in oversold territory.

Its 14-day Relative Strength Index score is 33.3, above the oversold 30 mark, while its Z-score to its 200DMA (the number of standard deviations away) is at -2.61. In the last five years, the GBP/USD’s Z-score has only been under -2.50 on two occasions and on both those occasions it needed to fall under -3.0 before GBP/USD rebounded. 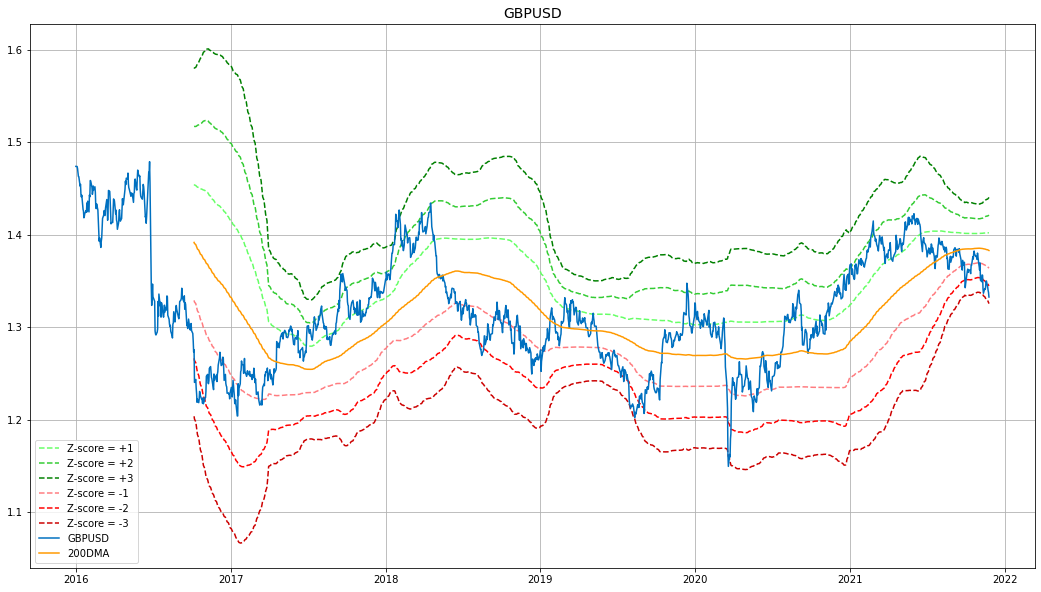