GBP/USD erased some of earlier weekly losses after the Bank of England (BoE’s) decided to increase borrowing costs for the third time, in the same number of monetary policy meetings, since December of 2021. At the time of writing, the GBP/USD is trading at 1.3176.

Wall Street’s closed the week with gains, reflecting the sudden improvement in risk appetite. Peace talks between Russia and Ukraine would continue; however, there have been mixed signals from both sides of the conflict that do not allow to reach an agreement that could trigger a truce or ceasefire.

Late in the New York session, US President Biden and Chinese President Xi Jinping held a videoconference reunion. China expressed its posture on the Russia-Ukraine conflict to the US. Chinese President Xi said that the invasion “is not something we want to see” and that “the events again indicate that countries should not come to the point of meeting on the battlefield.”

Elsewhere, once the Federal Reserve hiked rates on Wednesday, 0.25% for the first time in three years, the Fed speakers parade began.

The first official to cross the wires was St. Louis Fed President Bullard, who dissented in the meeting because he wanted the Fed to follow a balance sheet reduction plan, alongside a 50 bps increase. In the same tone, Fed’s Waller commented that the US central bank should consider a 50 bps rate hike at a certain point, while added that he expects to begin QT by July.

Late in the day, Minnesota Fed’s President Neil Kashkari said that the central bank should begin lowering its balance sheet as soon as the next meeting.

The GBP/USD bias is down, as the daily moving averages (DMAs) reside above the exchange rate. Even though cable has reclaimed to trade within the lower boundaries of the descending channel, it remains vulnerable unless the GBP/USD pair achieves to reclaim the 1.3300 mark. If that scenario plays out, then a GBP/USD upward move to the 1.3415-40 area, where the 50 and the 100-DMA’s sit, is on the cards. However, the path of least resistance is downwards. 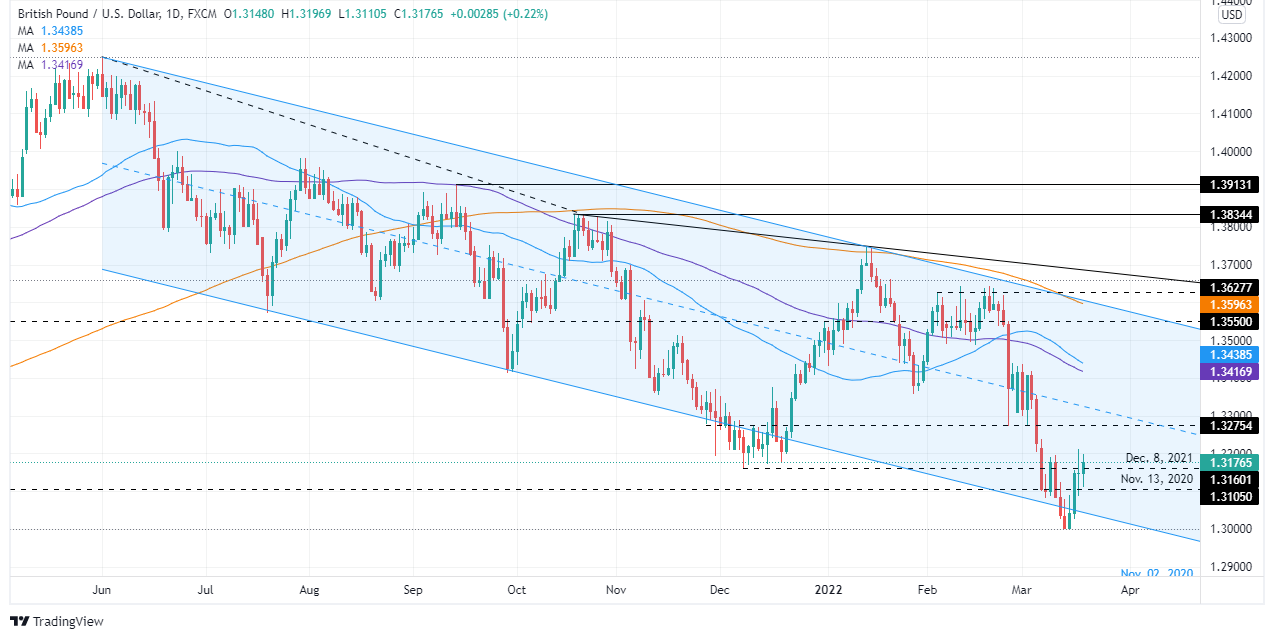