The British pound fell short of testing the 1.3100 mark, which left it vulnerable to selling pressure; consequently, the GBP/USD prices declined to the daily low at 1.3022. At the time of writing, the GBP/USD is trading at 1.3043, down some 0.18%.

European and US equities are trading with gains, while US Treasury yields rise. The greenback remains underpinned by the latter, as shown by the US Dollar Index, up some 0.22%, sitting at 100.571. Some central bank speaking is dominating newswires

Of late, Fed Chief Jerome Powell said that moving a little quicker is appropriate, and a 50bps hike will be on the table for the May meeting. Powell added that the economy is performing strongly, and the labor market remains tight.

Earlier, St. Louis President James Bullard reiterated that the Fed is behind the curve and will not have a hard landing. He emphasized that a 75bps hike had been done, and the world did not come to an end.

On Thursday, San Francisco Fed President Mary Daly noted that the Fed “will likely” raise rates by 50 bps at a couple of meetings. However, she is open to deliberating what size of increases are needed, according to Yahoo Finance Interview. Daly reiterated that the Fed needs to take a measured pace on rate hikes and get rates up to 2.5% by the end of the year.

Meanwhile, in the European session, BoE’s Catherine Mann said on Thursday that she would need to look at whether 25 bps or additional interest rates hikes are required so the BoE could tame inflation. She added that “If we see rising energy prices and slowing sales, then, in some sense, we are already in stagflation; though, it is a little premature to use such a term.”

With that said, the GBP/USD outlook in the near term is tilted downwards. As the Federal Reserve prepared for successive meetings of 50-bps rate hikes, the BoE’s last 25-bps increase had one dissenter, Jon Cunliffe, who said on April 4 that the central bank might not need to take sustained action to stop stickier inflation in the UK.

The GBP/USD is stills tilted to the downside. Given that GBP/USD bulls failed to break 1.3100, they opened the door for further downside. Furthermore, the Relative Strenght Index (RSI), which was aiming higher, turned bearish, sitting at 43.56. 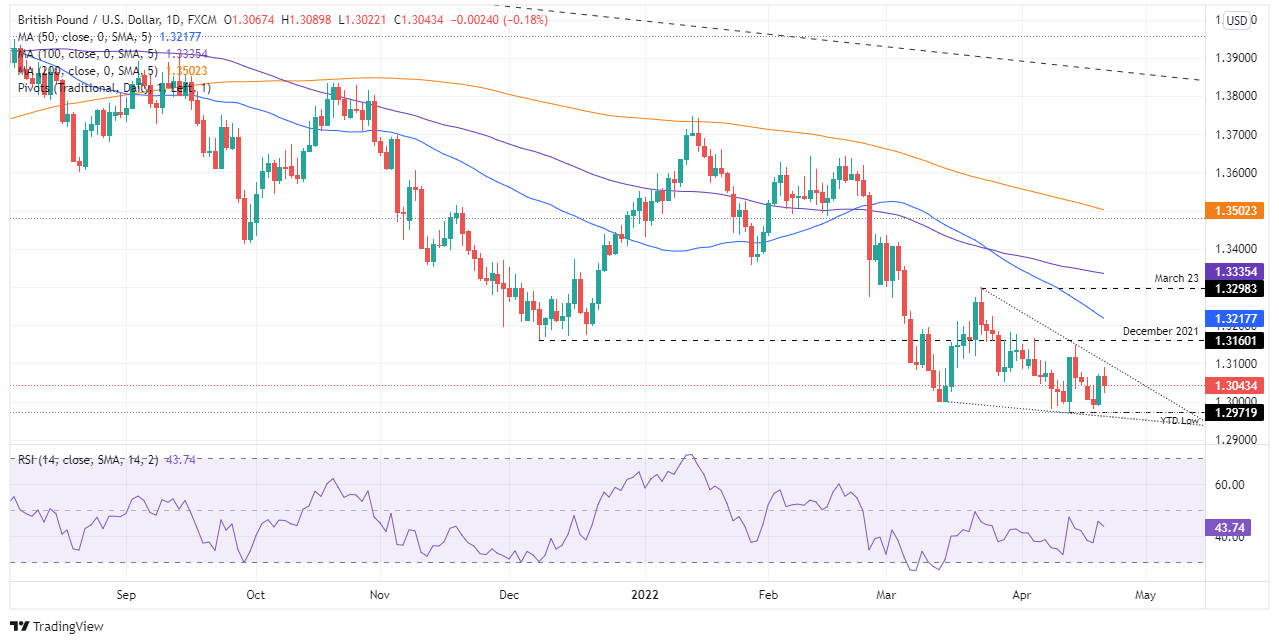