The Gold price is running higher on the day as the US dollar falls away while XAUUSD head close to the $1,720s scoring a high of $1,716.97 so far. DXY, an index that measures the greenback vs. a basket of currencies has come under scrutiny as it drops below the 110 mark, a level not seen in almost two weeks. This is also taking on a critical daily trendline, as illustrated below, a break which could be significant for the price of the yellow metal in the days to come. DXY was trading at a low of 109.39 so far from 110.61 as the high.

Risk appetite returned to the markets with attention turning to the midterm elections, with results that are due out later in the day. Investors are hoping for a political gridlock that could prevent radical policy changes and for a slowdown in the pace of rate hikes from the Fed. This in turn is weighing on the greenback, US yields and is thus beneficial for the price of gold.

Control of just one chamber of Congress by Republicans would put a block on President Joe Biden’s legislative push for more business regulations. ”Congressional Republicans have threatened a debt ceiling showdown next year in an effort to cut entitlements and Medicare if they win a majority in the House.  In recent weeks, polls have been tilting in favour of the Republicans in both the House and the Senate,” analysts at Brown Brothers Harriman explained.

When can we expect US midterm election results?

The UK’s Telegraph explained that ”the first wave of vote tallies are expected on the East Coast between 7 pm and 8 pm EST (12 am and 1 am GMT). An early indication of Republican success could come if the races expected to be close – like Virginia’s 7th congressional district or a US Senate seat in North Carolina – turn out to be Democratic.

By around 10 pm or 11 pm EST, when polls in the Midwest will be closed for an hour or more, it is possible Republicans will have enough momentum for experts at US media organisations to project control of the House.”

US CPI and outlook for the Fed

Investors also await key US inflation data later this week that could influence the size of the Federal Reserve’s rate hike in December. Markets are pricing in a scenario that the Fed will hike rates by 50 basis points in December after delivering four successive 75 basis point rate increases and despite the Chair Jerome Powell’s pushback against a pivot following last week’s Fed decision.

In his presser, Jerome Powell argued that we could see a higher terminal rate vs the prior market expectations. However, in the recent Nonfarm Payrolls report, the Unemployment Rate was a disappointment. This, combined with recent dovish rhetoric from some Fed speakers following prior disappointments on other important data, such as Manufacturing and Services, investors have begun to flip the switch on their outlook for the Fed and expect a slower pace of tightening is on the cards.

Looking ahead in this regard, we will get one more jobs report and two sets of inflation and Retail Sales data before the December 13-14 meeting. However, for this week, the US Consumer Price Index will be critical. It will be scrutinized and analysts at TD Securities suggested that Core prices likely slowed modestly in October but to a still strong 0.4% MoM pace.” All told, our MoM forecasts imply 7.9%/6.5% YoY for total/core prices.

‘A below consensus print is likely to help push the pricing for the terminal funds rate modestly lower, likely bull steepening the curve in the process,” analysts at TD Securities argued. ”The risk of a lower reading is why we took profit on our 2s10s curve steepener last week and went long 10y Treasuries, which we viewed as attractive,” they said.  Ultimately, this would be encouraging for gold as a softer core print will exacerbate positioning which has moved to swiftly reduce USD longs recently. Conversely, chatter that the Fed may tilt somewhat less hawkish has convinced Gold specs to build more modest long positions that could continue in such an outcome for this week’s CPI.

As per the pre-open weekly analysis on Gold, Gold, Chart of the Week: XAUUSD bulls pushing up against key resistances ahead of US CPI, it was stated that ” the charts see the price pressured in a firm downtrend and there are prospects of a bull correction to fully test the bear’s commitments ahead of the US Consumer Price Index data for the forthcoming week”

That W-formation looks menacing for the week ahead with prospects of a push into the trendline and when coupled with the following Crab harmonic pattern on the daily chart: 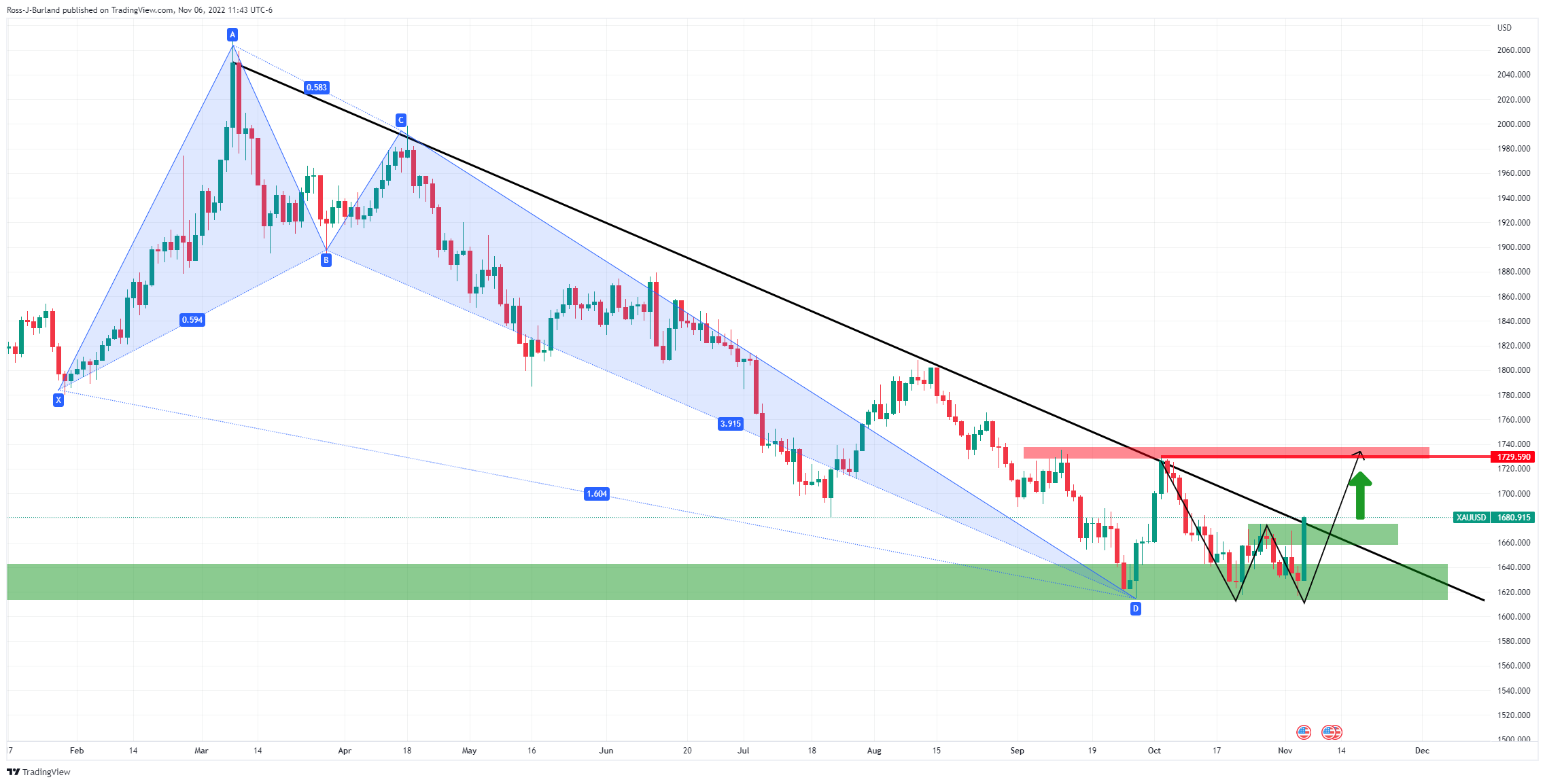 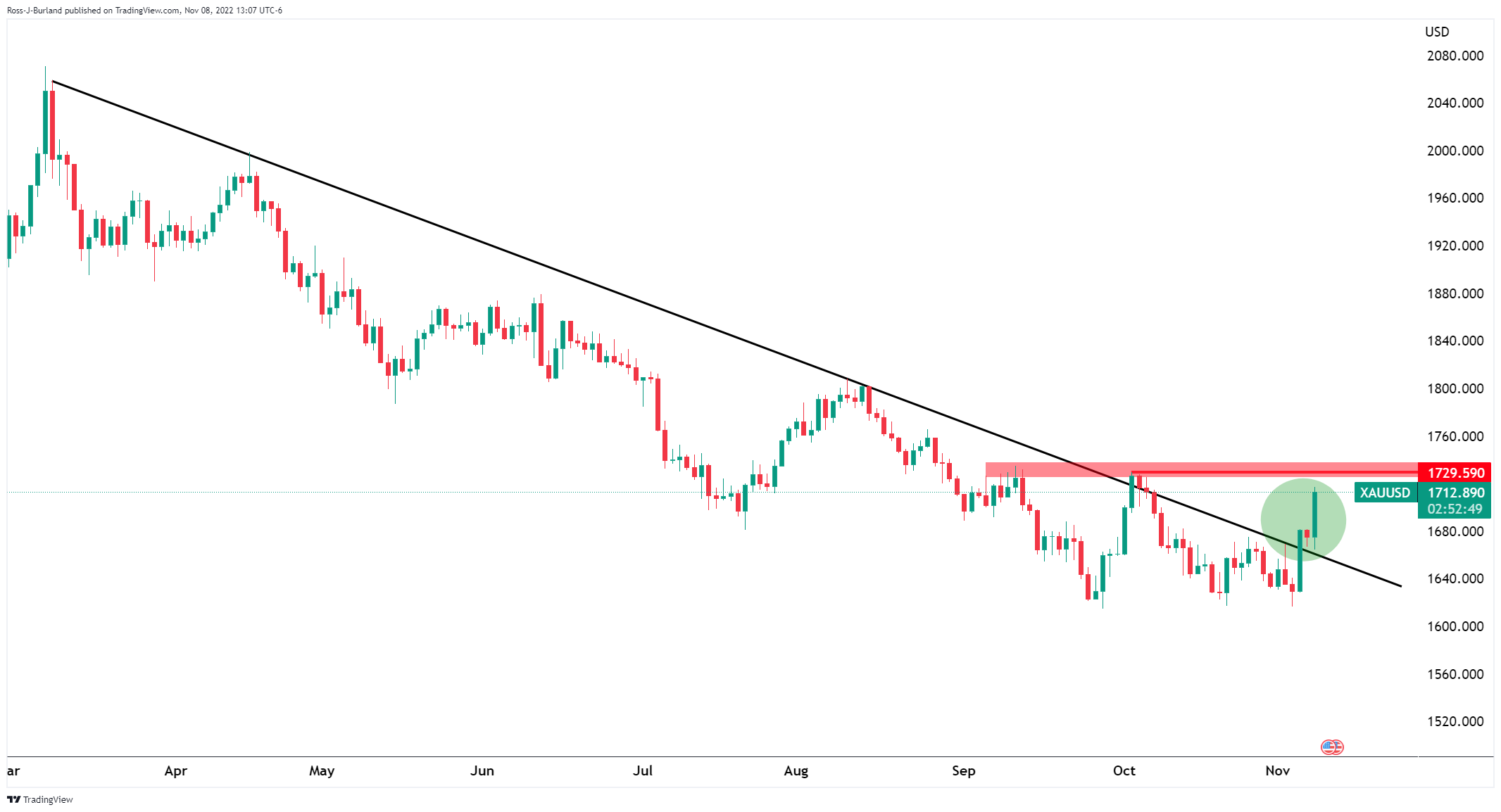 With a high of $1,716, there is still some way to go until the $1,730 rounded number and October highs. Indeed, there are still a number of sessions to go until the US CPI event as well and a day is also a long time in US politics.

If the US Dollar breaks clean below the trendline, then the gold has the potential to move higher: