Update: Gold is starting to back away from the highs of the day near $1,942 as the risk-off scramble dies down late in the New York session. XAU/USD has rallied from a low of $1,901.47, an area of support and in a move that was forecasted in the prior analysis from the New York session on Monday as follows: 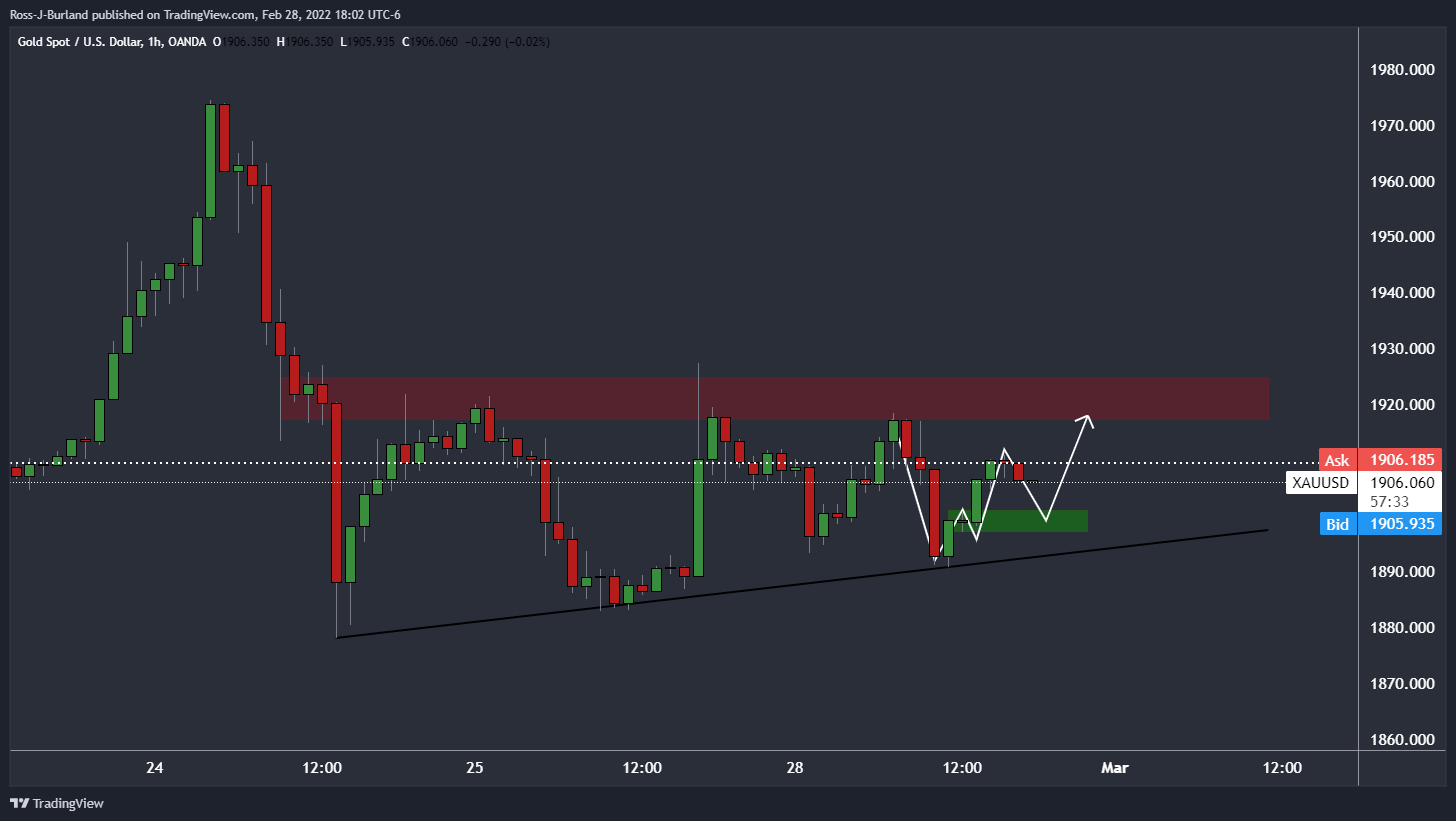 ”The hourly chart offers a trapped bias between the trendline support and the overhead resistance near $1,920. Meanwhile, the W-formation is pulling in the price towards the neckline near $1,901.” 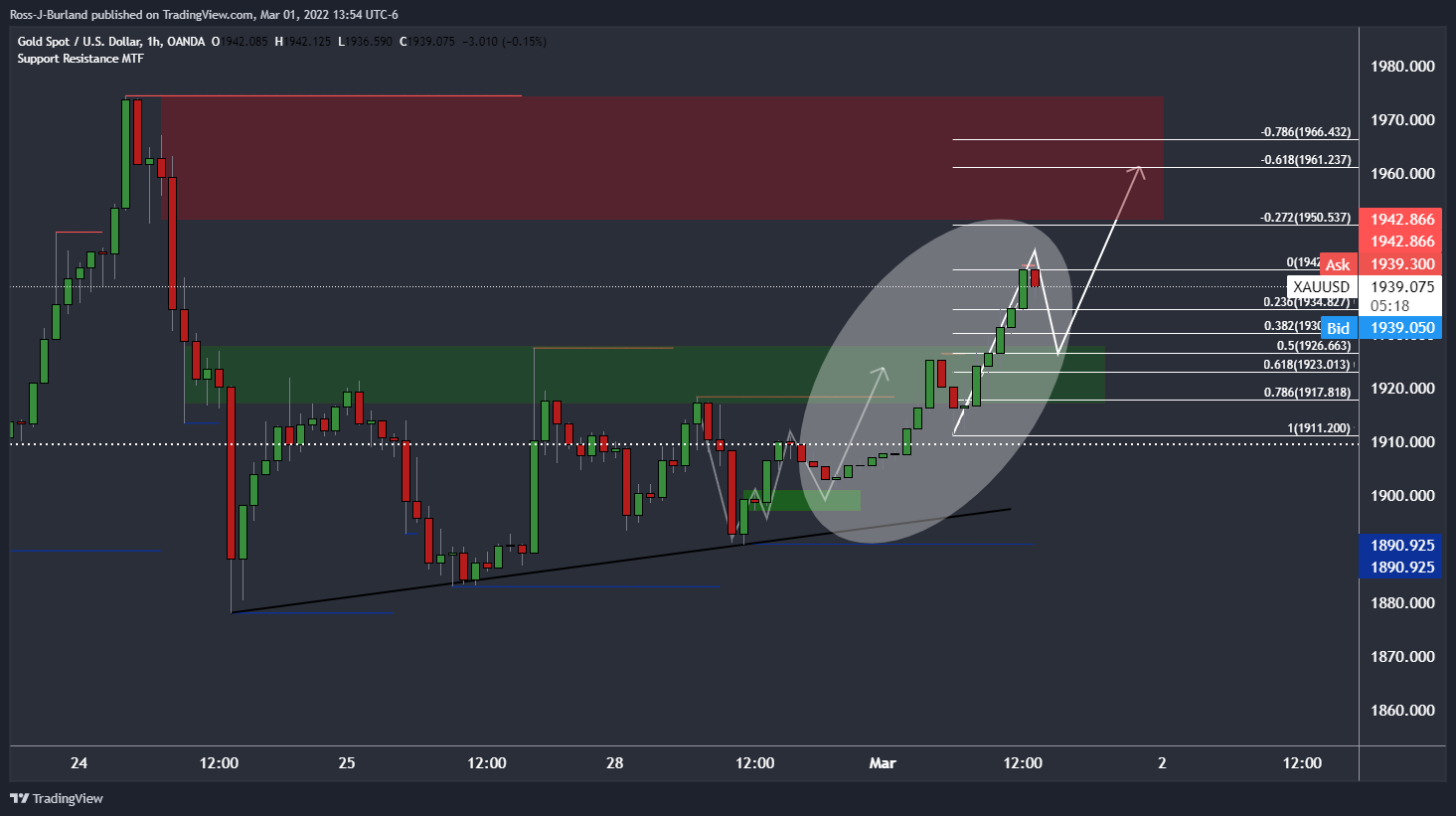 At this juncture, the price would be expected to give back some ground as profits are taken off but trend-followers will potentially reengage all the while the Ukraine crisis remains in the driving seat.  The situation is fluid, with rate futures and bond prices whipsawed which is benefitting the yellow metal.

On the one hand, war threatens to undercut a global economic recovery while on the other, inflation unleashed by an oil price surge that will be hard for central bankers to overlook. Inflation is also likely to act as a tax on consumers, analysts at TD Securities argued. In this regard, the Federal Reserve will be a key event this month. ”The market is repricing expectations for a 50bp hike for March, in support of gold bugs,” the analysts at TDS said.

Gold (XAU/USD) rises for the second consecutive day on Tuesday, back above the $1900 mark so far, and it will likely remain higher as geopolitical tensions persist. Ukraine – Russia conflict does not appear to end in the short term, despite Monday’s first round of talks between officials from both countries. At the time of writing, XAU/USD is trading at $1926.

The US economic docket featured the first tranche of data in the week. The ISM Manufacturing PMI for February rose to 58.6, higher than the 58 estimated by analysts. In addition, ISM’s new orders advanced close to four points, reaching a five-month high of 61.7.

“The US manufacturing sector remains in a demand-driven, supply chain-constrained environment,” Timothy Fiore, chair of ISM’s Manufacturing Business Survey Committee, commented in the report. The omicron variant “remained an impact in February; however, there were signs of relief, with recovery expected in March.”

Furthermore, the ISM Price Index rose to 75.6 in the same period, higher than estimations but lower than January 76.1, reflecting easing price pressures.

Investors’ mood remains depressed. European and US equity indices extended losses, while safe-haven currencies remained bid in the FX space, except for rising peers linked to commodities, like the AUD, CAD, and NZD.

Meanwhile, the US Dollar Index, a gauge of the greenback’s value, is up close to 0.50%, sitting at 97.21, despite falling US Treasury yields. The US 10-year T-note plunges 12 basis points, at 1.719%, weighing on the USD value against the yellow metal.

Therefore, gold would remain firmly upwards unless geopolitical conditions improve, meaning a ceasefire and peace talks between Ukraine and Russia.