Update: Gold has been on the bid during US Russia’s President Vladimir Putin speech, although dying out towards the climax when Putin finally announced his intention to sign a separatist recognition decree over eastern Ukraine regions. The price of gold is firm as investors will likely regard this move as another step closer to the prospects of a European war and will likely hurt risk associated assets classes in financial markets. 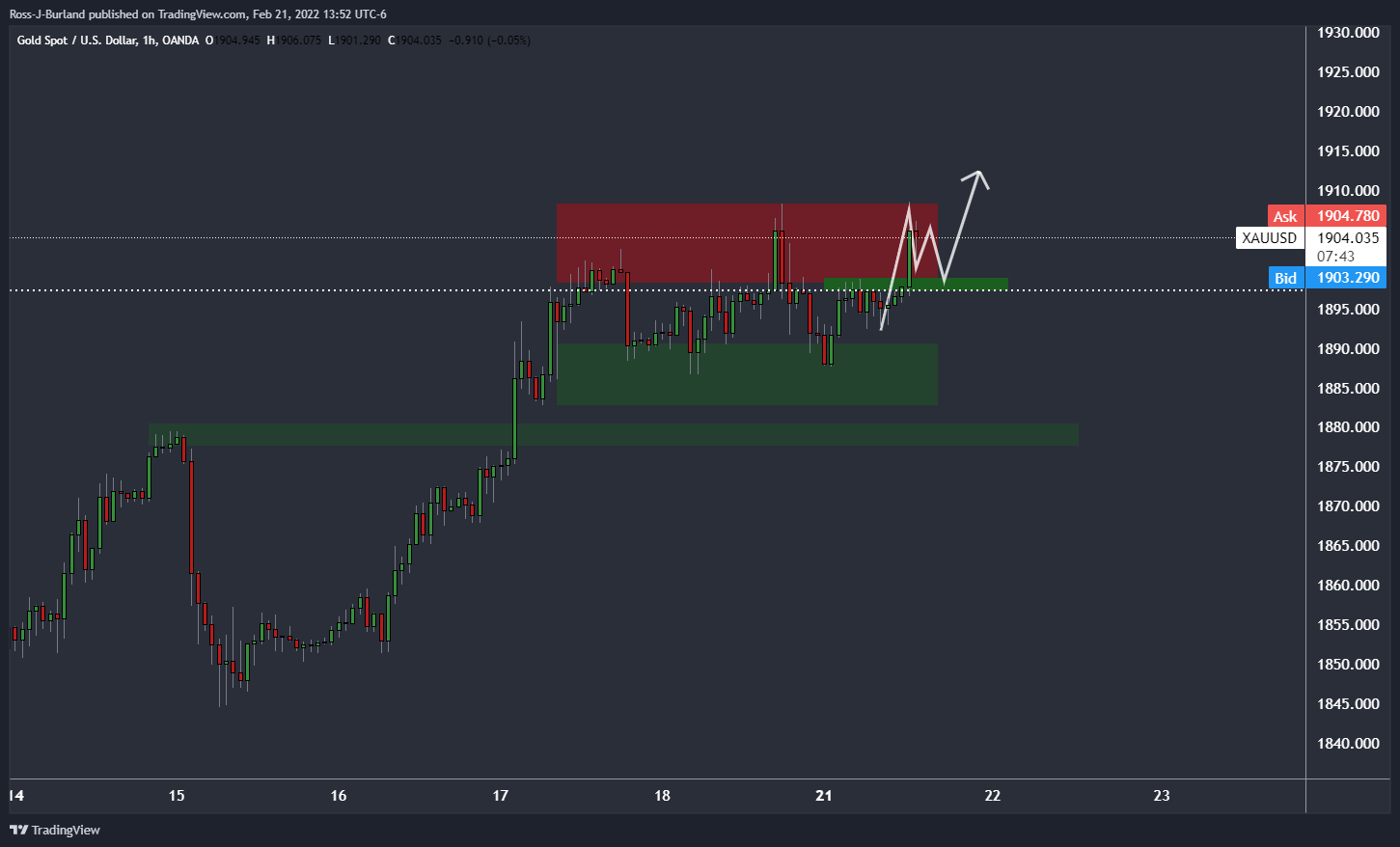 From a 1-hour perspective, the price is attempting to break out of the sideways channel. If the prior hourly highs near $1,898 hold, then there will be prospects of a break of $1,910.

Gold has been trapped in a sideways consolidation in Monday’s range and between the toing and froing of headlines centred around the Russian/Ukraine drama. It is the zero hour for diplomacy and the Kremlin has regretfully said there were no concrete plans for a summit over Ukraine between the Russian and US presidents. The safe-havens, such as gold and the US dollar, are benefitting, thus trapping the yellow metal in a risk-off boundary.

At the time of writing, XAU/USD is flat at $1,895.92 and has travelled between  $1,887.66 and $1,908.32 on the day so far. Reports that Russian president Vladimir Putin and US president Joe Biden had agreed in principle to a summit had sparked up a risk-on vibe in the opening hours of the week, weighing on precious metals.

US president Joe Biden will participate in the G7 meeting this Thursday, a White House spokesman said. The official also said, however, that the US is prepared to impose swift and severe consequences if Russia invades, adding that Russia appears to continue preparations for a full-scale assault on Ukraine very soon.

Putin to address the nation

The focus for the immediate future will be on Putin at the top of the hour where he is scheduled to address the nation. Markets will be on the edge of their seats to understand whether Putin has decided today whether to recognise the independence of two breakaway regions in eastern Ukraine.

The BBC wrote that ”the Donetsk and Luhansk regions have been contested by Ukraine and Russia-backed rebels for years, with regular violence despite a ceasefire agreement.

Leaders of both regions asked Russia to recognise their independence on Monday.

But Western powers fear such a move could be used as a pretext for Russia to invade its neighbour.

Since 2019, Russia has issued large numbers of passports to people living in the two regions.

Analysts say that if the two regions were recognised as independent, Russia might send troops into Ukraine’s east under the guise of protecting its citizens.”

Should there be signs of the infiltration of troops into the region, such an escalation will be a big blow for markets and gold would be expected to benefit on the knee-jerk s trend-followers and speculators reengage.

The price is trapped in 4-hour range traders are waiting for the breakout, one way or the other.