Gold (XAU/USD) is almost flat but edges high during the North American session amid a risk-on market mood, as portrayed by US equities trading with gains. A rebound in oil prices boosted the prospects of the precious metals sector, in particular the yellow metal, so in consequence, XAU/USD is trading at $1931.05, up some 0.35% at press time.

US equities began the New York session lower but lifted in the mid of the trading session. The Russia-Ukraine war drags on, and the atrocities committed by Moscow of Bucha would exacerbate several tranches of new sanctions imposed by European countries. Germany’s response to that, expelled a substantial number of Russian diplomats, according to AFP, citing a minister. In the same tone as Germany, France has decided to remove “a lot” of Russian diplomatic personnel, a signal of escalation in the Eurozone.

Aside from this, US Treasury yields are recovering from Friday’s losses. The US 10-year benchmark note is up two and a half basis points sitting at 2.399%, though stills below the 2-year, which sits at 2.440%, extending the yield curve inversion for the second straight day.

Following the rise of US yields is the greenback, as portrayed by the US Dollar Index, a gauge of the buck’s value against a basket of peers, is up 0.42%, sitting at 99.05%.

Before Wall Street opened, the US economic docket featured Factory Orders for February on a monthly basis, which came at -0.5% as estimated but trailed January’s 1.5% reading. That said, the docket would turn to Fed speaking on Tuesday, followed by Wednesday’s FOMC minutes.

XAU/USD’s price action depicts the bias as neutral. The current environment keeps non-yielding metal traders waiting for a catalyst, as fluctuating market sentiment, alongside higher US T-bond yields, keeps prices more volatile than pre-war levels. Gold has been seesawing through the last fourteen days, and the escalation of sanctions on Russia from Western countries would keep XAU/USD trading in familiar ranges. 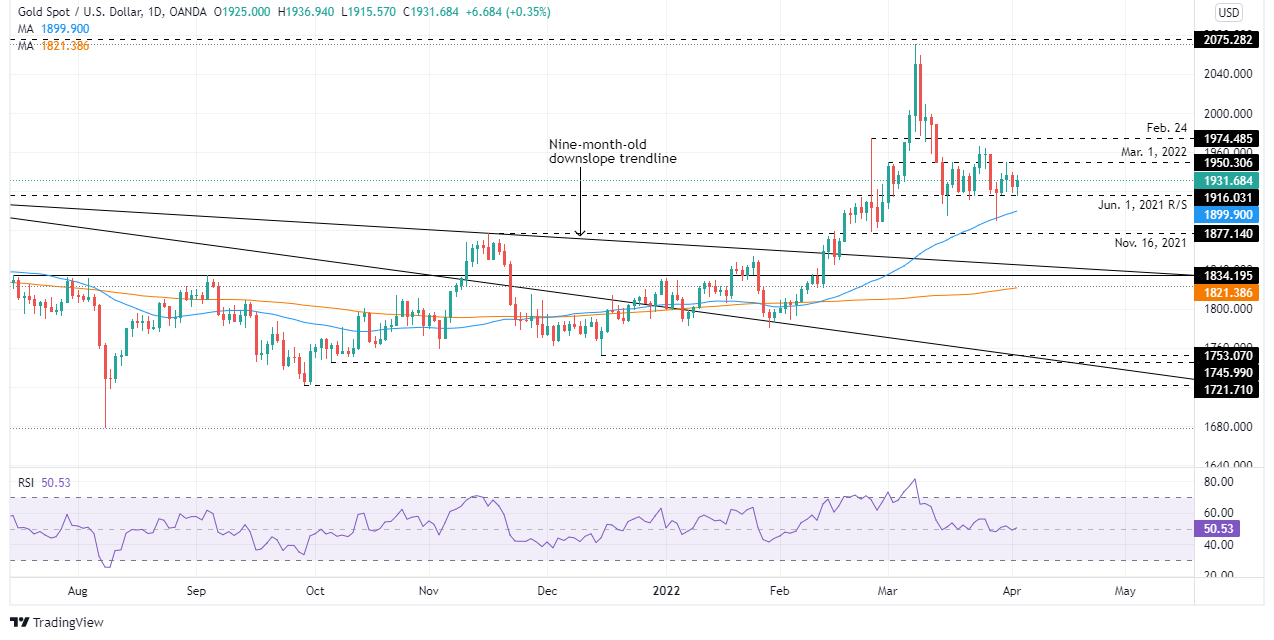