The gold price is down on the day, losing around 1.9% at the time of writing as the US stock market rises later in the day for a positive close in hopes of a breakthrough in peace talks surrounding the Ukraine crisis.

The FT released an article that states that Russia is no longer demanding that Ukraine be ‘denazified’ in ceasefire talks and will allow Kyiv to join the EU if it abandons Nato aspirations. It went on to say that Moscow & Kyiv will discuss a pause in hostilities at talks in Turkey on Tuesday and draft documents do not contain three of Russia’s initial core demands — “denazification”, “demilitarisation”, and legal protection for the Russian language in Ukraine, sources told the FT.”

However, when it comes to the possibility of a Putin-Zelenskiy meeting, the Kremlin says there has been no progress. The Russian Foreign Minister Lavrov said recently that any meeting between Putin and Zelenskiy to exchange views currently would be counter-productive. Additionally,  a senior US official said Russian President Vladimir Putin did not appear ready to make compromises. Ukrainian officials are also playing down the chances of a major breakthrough at the talks.

Mixed US data and solid stocks

Meanwhile, the US dollar was a touch shorter in the US session as well following mixed data and softer US yields that started to decline in the European session with the 2-year yields sliding from 2.414% to a low of 2.292% by very early North American trade.

The Dallas Federal Reserve’s monthly manufacturing survey for March, a narrower advance trade gap for February and a rise in inventories. The Dallas Fed’s manufacturing activity index fell to 8.7 in March from 14 in February, in contrast to other regional data that indicated expansion in the sector. The ISM’s national index will be released on Friday. Additionally, the trade gap narrowed 0.9% to $106.6 billion in February amid higher exports. The updated trade data for the month will be released on April 5. Lastly, Wholesale Inventories rose by 2.1% in February and retail inventories by 1.1%. Wholesale inventories will be updated on April 8, while retail inventories will be updated on April 14.

Meanwhile, analysts at TD Securities explained that an inverting yield curve is bringing back whispers of a recession on the horizon.

”This comes as rates markets are readying for the Federal Reserve to deliver a hawkish surprise to markets, sending a strong signal that markets are increasingly pricing in a Fed that is willing to overshoot the neutral rate in order to bring inflation under control. In this context, gold prices have remained incredibly resilient, reflecting that strong ETF inflows into gold are trumping outflows associated with a hawkish Fed, which is in turn creating a divergence between gold and rates markets.”

Key data events to watch for

As for the economic calendar for the week ahead, the US jobs market and eurozone inflation data will be keenly eyed. The US Nonfarm Payrolls at the start of the new month on Friday is likely to show that Employment continued to advance in March following two strong reports averaging +580k in Jan and Feb, analysts at TD Securities argued.

”That said, we expect some of that boost to fizzle, though to a still firm job growth pace of +350k. Indeed, job gains should lead to a new drop in the unemployment rate to a post-COVID low of 3.7%. We also expect wage growth to slow to a still firm 0.3% MoM pace.”

As for eurozone inflation, the analysts expect ”headline HICP inflation to soar across the euro area in March, mostly due to a substantial surge in energy prices.”

They are also looking for a rise in non-energy industrial goods prices to boost euro area core inflation to a 28-year high of 3.2% (mkt: 3.1%). ”However, newly passed energy subsidies and price caps add some downside risk to our headline forecasts.”

Chart of the Week: Gold is moulding a bullish close for the month

As explained in the pre-market open note at the start of the week, the last week of the month and the start of a new quarter could print a bullish prospect on the monthly chart, as illustrated below: 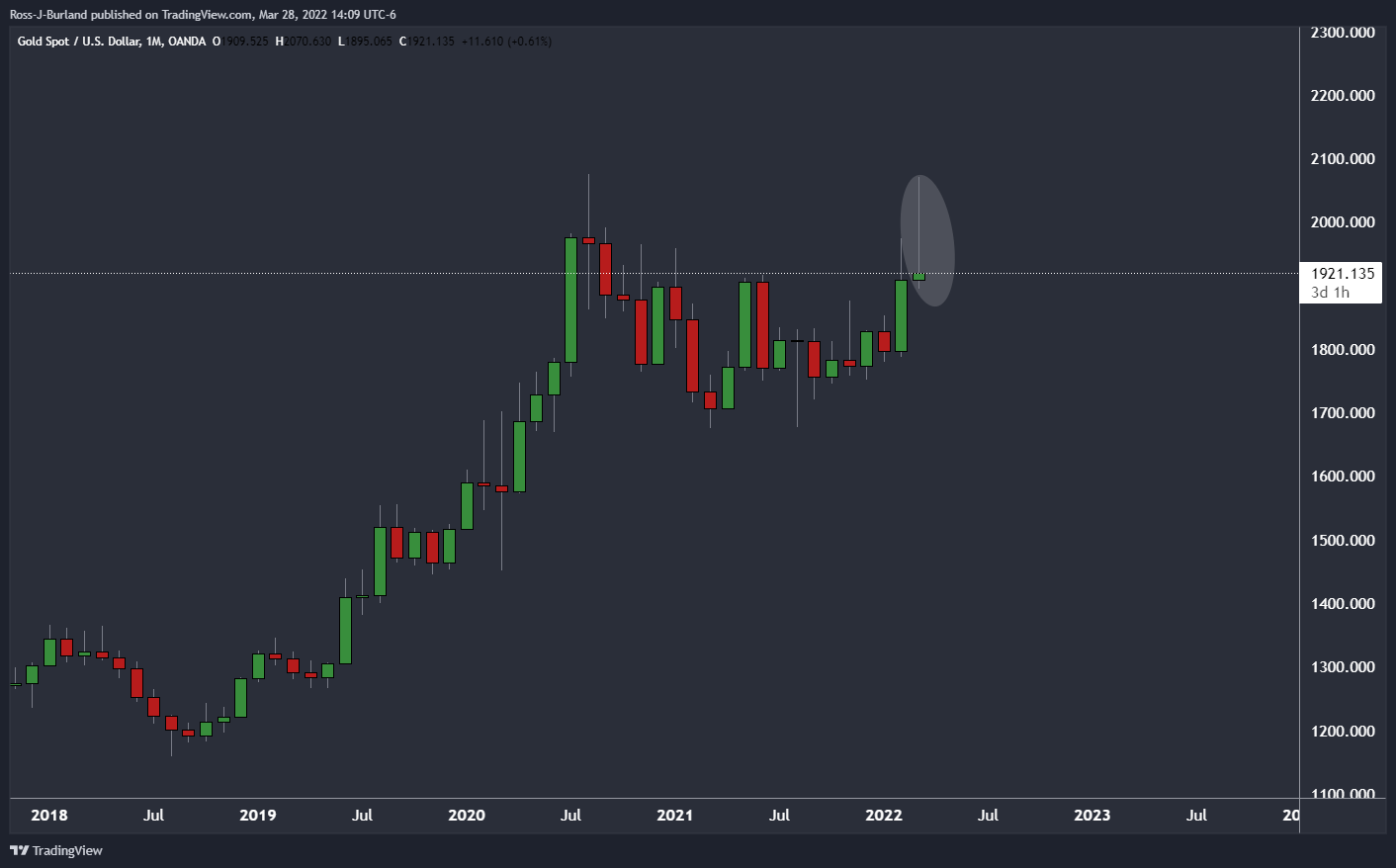 The month is set to close with a bullish candle and long wick that represents a phase of accumulation on the lower time frames.