Gold (XAU/USD) slides as the second quarter begins, down some 0.64% in the North American session. The Russia-Ukraine tussles, elevated global inflation, and rising US Treasury yields, keeping the non-yielding metal pressured. Nevertheless, an inversion in the 2s-10s yield curve is worth noting as investors assess the outcome for the yellow metal. At press time, XAU/USD is trading at $1924.46 a troy ounce.

US equities fluctuate as Wall Street is about to close; meanwhile, European bourses finished positive. The Russia-Ukraine war extends as peace talks over the last couple of weeks have failed to offer a diplomatic exit to the war. Furthermore, Russia’s President Vladimir Putin puts pressure on Europe after signing a decree that non-friendly countries need to pay in roubles for natural gas.

That triggered a raft of negative market moods on Thursday, which lifted gold towards $1950. Nonetheless, positive US economic data weighed on gold prices.

The US economic docket featured March’s Nonfarm Payrolls report, which came at 431K jobs created, lower than the 490K estimated by analysts. Even though it was slightly softer than expected, forecasts ranged from 0 to 700K, so the market perceived it as a robust report. Moreover, the Unemployment rate in March dropped to 3.6% from 3.8% YoY in and beat the 3.7% estimations.

Later the US ISM Manufacturing PMI, a leading indicator for the industry, fell to 57.1 in March from 58.6 in February, well below the 59 estimations by analysts.

Meanwhile, the US Dollar Index, a gauge of the greenback’s value against a basket of its rivals, rose 0.22%, sitting at 98.566, underpinned by US Treasury yields. The US 10-year benchmark note surges four basis points at 2.371%.

XAU/USD is trading within the $1910-50 range for thirteen consecutive days, consolidated and with a lack of direction. The Relative Strength Index (RSI), a momentum indicator, has been seesawing around the 50-midline but on Friday turned bearish at 48.71. However, the daily moving averages (DMAs) below the spot price depict an upward bias, but contradictory signals recommended to wait for a fresh catalyst. 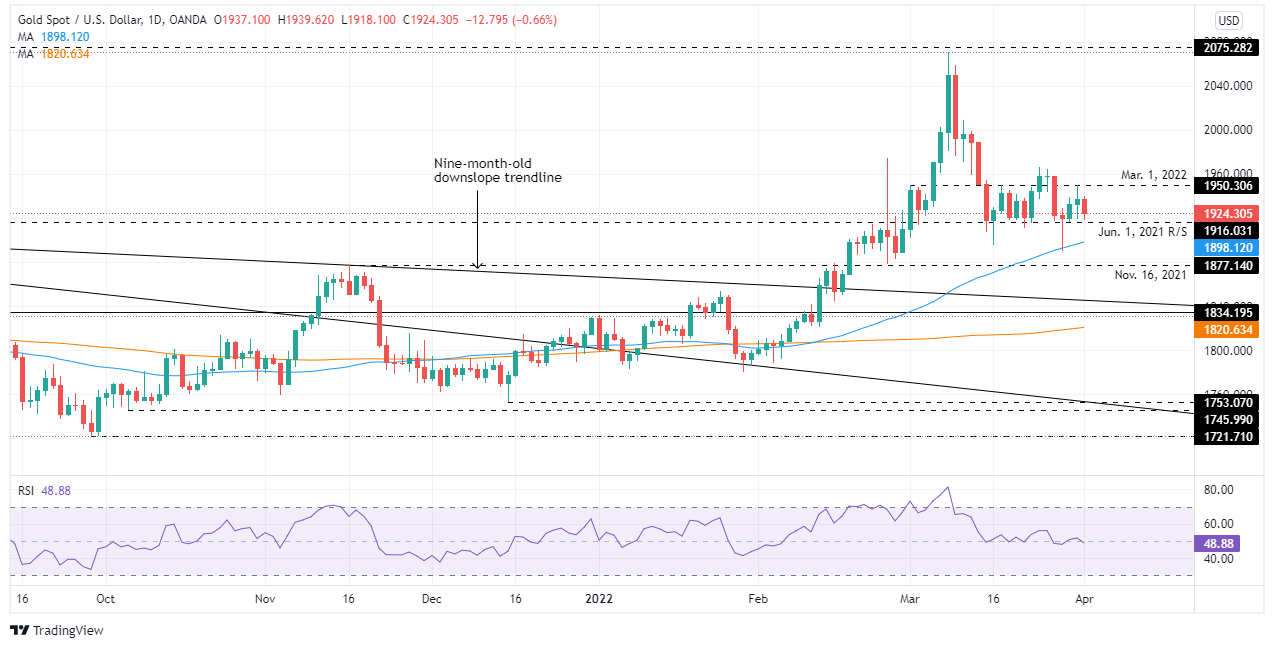