Gold (XAU/USD) remains buoyant despite rising US Treasury yields amidst an upbeat market mood, as investors shrugged off the Ukraine-Russia brawl and a hawkish Federal Reserve, which according to March’s minutes, would hike 50-bps in the May meeting as well as reducing the $9 trillion balance sheet. At the time of writing, XAU/USD is trading at $1944 a troy ounce.

On Friday, US Treasury yields keep reflecting the aggressive posture of the US central bank. Treasury yields from the 2-year bills to 30-year bonds gain between five and seven basis points. The US 10-year benchmark note is up to five basis points, sitting at 2.711%, the highest reached since May 2019.

On Wednesday, the Federal Reserve released the minutes of its March meeting. The minutes showed that most policymakers were looking for a 50-bps increase if not for the Russian invasion of Ukraine, so hiking 25 bps was prudent to do. During the same meeting, the US central bank lay the ground to reduce its $9 trillion balance sheet by $95 billion a month, $60 on US Treasuries, and $35 billion on mortgage-backed securities (MBS).

Money market futures have priced in a 88% chance of a 0.50% rate hike to the Federal Funds Rate (FFR)  in the May 4 meeting.

Elsewhere, analysts at JP Morgan warned that commodities could surge by 40% if investors boost their allocation to raw materials as elevating inflation accelerates, according to Bloomberg. That would trigger inflows to the yellow metal as a hedge against inflation as the Fed hikes rates to tame inflation but at the expense of slowing the economy.

On Thursday, St. Louis President James Bullard said that the Fed policy rate was too low, by 300 basis points. He added that the Fed is not that far behind the curve and expects the Federal Funds Rate (FFR) to end the year at around 3.5%.

Gold is tilted upwards, but since March 15 consolidated in the $1900-$1966 range as the Fed hiked rates for the first time since 2018. Despite that price action is sideways, the daily moving averages (DMAs) reside below the spot price, with an upslope. Worth noting that the Relative Strenght Index (RSI) at 53.49 is in bullish territory, aiming higher, further cementing the upward bias. 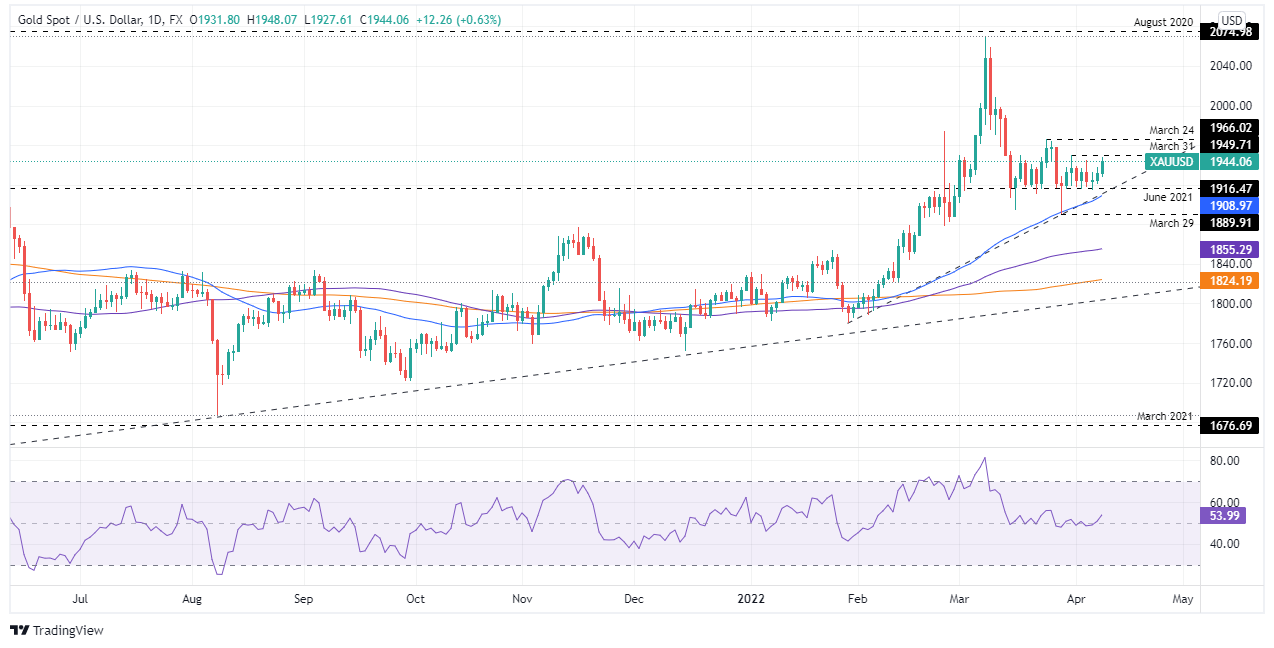