Update: NASDAQ:LCID is down over 17% heading into the US close, now quoting at $36.95 per share. The decline was triggered by news that the company announced that it is offering $1.75 billion in senior convertible notes. Taking debt to fund operations is usually taken negatively by market participants. At the same time, global indexes closed mostly lower, weighed by Omicron-related uncertainty. 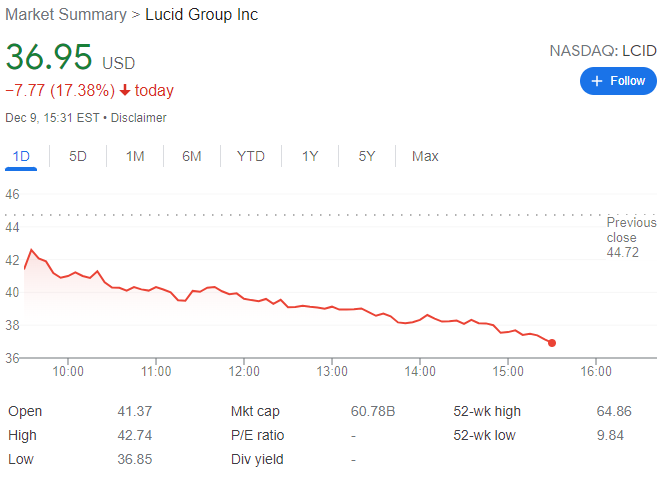 Previous updates: NASDAQ:LCID appeared to be heading for yet another losing day until the stock rallied into the closing bell to buck its recent downtrend. Shares of LCID gained 1.91% and closed the trading day at $44.72. It was a mixed day overall for the EV sector which has experienced some choppiness as of late. The sector has been caught up in the recent growth stock sell-off, which has seen Lucid lose over 12% during the past five days. The NASDAQ extended its recent streak and gained 0.64%, while the S&P 500 hovered just below all-time high prices once again after climbing higher by 0.31% for its third consecutive session in the green.

While Lucid’s stock closed higher during trading hours, extended trading hours were a different story altogether. Shares of Lucid tumbled after the close as the company announced a proposed convertible senior note offering to the tune of $1.75 billion. More often than not these capital raising proposals are met with the sourness from investors, although they do benefit the growth of the company in the long run. At the time of this writing, shares of Lucid were down nearly 8% in after-hours trading.

Some more optimism for EV investors came on Wednesday when President Biden signed an executive order to update federal government infrastructure. The plan is to ensure that the US government is carbon neutral by 2050, and this begins by updating any federally owned buildings to use clean energy. It will also see the 600,000 vehicles in the federal fleet be upgraded to electric vehicles in the coming years, which is a positive for any American EV maker such as Lucid.