Update: NASDAQ:LCID came under strong selling pressure on Wednesday, shedding over 7% to trade around $27.58 per share. Wall Street suffered a knee-jerk at the opening, hurt by dismal US employment-related data. Nevertheless, US indexes overcame the negative news and managed to advance, holding on to the green heading into the daily close. The DJIA was the best performer, adding over 200 points, while the Nasdaq Composite is currently 41 points up from its daily opening. 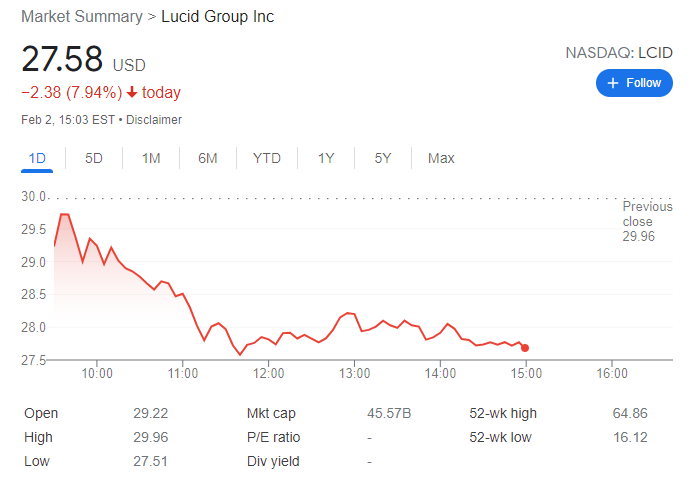 Previous update: NASDAQ:LCID climbed higher for the second straight day to start the week but the EV maker failed to recapture the $30 price level. On Tuesday, shares of LCID gained 1.94% and closed the trading session at $29.96. It was the third straight positive session for the broader markets as all three major indices kicked February off in the green. The NASDAQ and S&P 500 both jumped higher by 0.75% and 0.69%, while the Dow Jones paced the markets by regaining 273 basis points.

The electric vehicle sector remained hot on Tuesday but failed to duplicate the returns from Monday’s session. Part of the reason was because the industry leader Tesla (NASDAQ:TSLA) was trading lower after the NHTSA issued another recall on 54,000 vehicles due to a malfunction in the self-driving software. The issue won’t be very difficult to resolve for Tesla as the company stated it will be sending out a software update over the air to the vehicles that are affected. In other news, all eyes on the EV sector were on Chinese automakers as all three of Nio (NYSE:NIO), XPeng (NYSE:XPEV), and Li Auto (NASDAQ:LI) reported a year over year increase in January deliveries.

The Lucid Air Sedan received yet another glowing review this week, this time from the UK-based site TopGear.com. A team from the company has been in California test-driving the new luxury EV, ahead of a potential European launch later this year, or in 2023. The review went on to read that German automakers BMW, Mercedes Benz, and Audi could have some stiff competition from Lucid in the luxury sedan market.