Update, January 27: LCID is down 14.55% heading into the US close, changing hands at $28.55 per share. Wall Street managed to open in the green and post substantial intraday gains, boosted by upbeat US growth. Q4 GDP surprised investors by printing 6.9%, much better than the already optimistic 5.5% expected. However, and after the dust settled, stocks took a turn for the worst, affected by the US Federal Reserve hawkish stance. The Nasdaq Composite is among the worst performers, down 209 points at the time being. 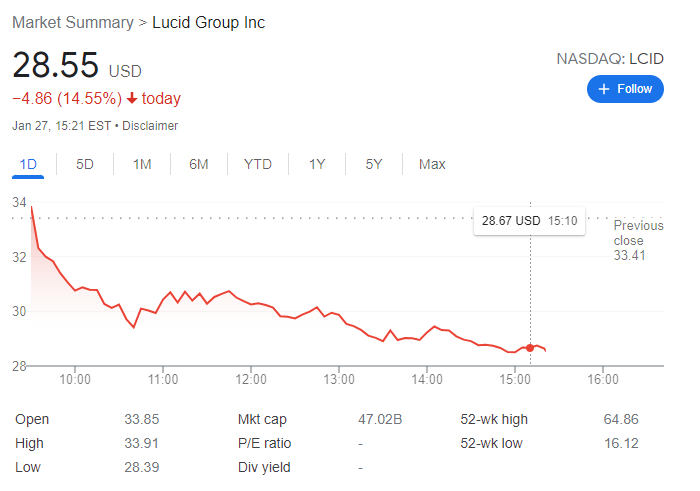 Previous update: Lucid stock (LCID) fell for the second straight day on Wednesday, shedding 5.78% to settle at $33.41. The stock tracked the steep losses in the Electric Vehicle (EV) sector leader, Tesla Inc., which declined 6%, despite the Q4 earnings beat. The downbeat tone on Wall Street indices on the Fed’s hawkishness also deepened the pain in LCID.

Lucid Group (LCID) shares followed the theme established so far this year and slid on Friday as high-growth names continue their fall. Admittedly, many of those high-growth names are falling from record highs, so this correction is overdue and may actually prevent a full-blown bubble crash. Electric vehicle (EV) stocks were one of the strongest performers of the last year, so naturally they have suffered as risk appetites have shifted in 2022. While Tesla (TSLA) as the sector leader suffers, it does at least have revenue and deliveries to fall back on. For other EV stocks such as Lucid and Rivian (RIVN), the earlier stage of development means investors are less forgiving in the current climate.

Lucid did get a form of a relief rally last week as an important milestone was reached. The lock-up period for early-stage investors passed without any major selling pressure. The PIPE transaction lock-up expired, but in reality this expiration only affected early stage long-term backers of Lucid. The expectation would not have been as strong for these holders to sell as against some of the later investors who may have been looking for a quick turn from the PIPE deal. Remember the PIPE deal was down at $15, so there are plenty of profits. However, the Saudi Public Investment Fund (PIF), one of the early backers of Lucid, is generally a multi-year holder of companies it invests in, and Lucid is still in its infancy.

However, that does not mean that all is well. Lucid is caught in the risk aversion currently sweeping through markets, and we do not see this changing in the short term. More losses may be unavoidable. The EV sector will have the spotlight thrust back upon it later this week when Tesla reports earnings after the close on Wednesday. Tesla has already reported delivery numbers, so earnings will be closely watched. This will set the tone for risk appetite within the EV space for the next few weeks.

We remain bearish and forecast further falls this week for LCID stock. Last week’s relief rally on the lock-up expiration is past, and this week is likely to bring a fresh focus on high growth stocks with limited revenue. Technically, the picture looks precarious.

There are already in place a bearish series of lower highs, with the last spike at $47.59. This is the upside pivot and remaining below means a breakout lower is likely. The key support is at $35.60. A break of this level and there is a huge volume gap down to $27. This could see an acceleration in losses. At least around $25 is a strong volume-based support zone with the point of control at $24.56 since the IPO. 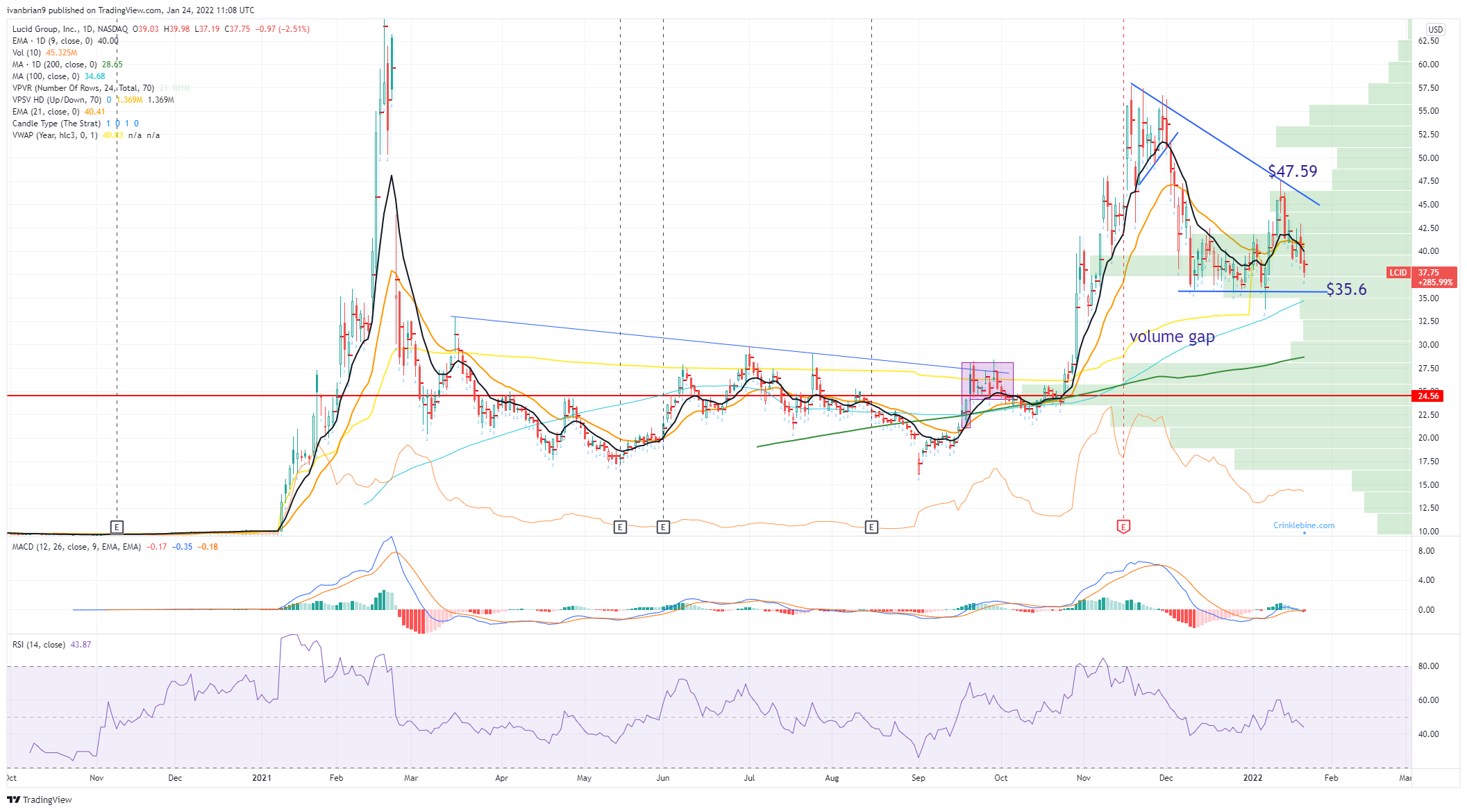 Update: Lucid stock (LCID) closed at $33.41 on Wednesday as continued woes hit the EV name. Growth stocks are still in the crosshairs of bears and with Tesla beating earnings but mentioning growing supply chain issues the sector may not get the catalyst it hoped for. Tesla shares dropped as much as 6% in after hours trading, before recovering to half that loss at the time of writing.