Update: NASDAQ:MULN turned sharply lower on Thursday and settled at $0.84, down 8.63% on the day. Wall Street lost its previous momentum, and major indexes closed mixed as recession-related concerns returned to the spotlight. The Dow Jones Industrial Average lost 85 points, while the S&P 500 finished the day 0.14% lower. On the other hand, the Nasdaq Composite added 52 points or 0.41%. 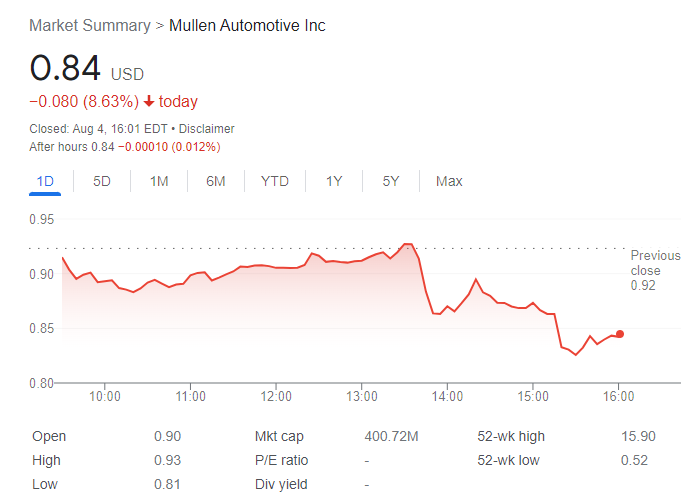 Previous update: NASDAQ:MULN climbed higher for the third consecutive session as the EV startup stock attempts to claw its way back above the $1.00 price level. On Wednesday, shares of MULN rose by 0.84% and closed the trading day at $0.92. Stocks rebounded on Wednesday following two straight red sessions to open the month. All three major indices jumped higher as stronger than expected economic data seemed to point towards the US economy avoiding a recession. Overall, the Dow Jones gained 416 basis points, the S&P 500 rose by 1.56%, and the NASDAQ posted a 2.59% gain for the session.

Electric vehicle stocks continued to rip higher on Wednesday, once again led by Tesla (NASDAQ:TSLA) which added a further 2.27%. Tesla shares have been steadily rising ahead of the proposed 3 for 1 stock split vote on Thursday. Other EV stocks rising again included Nio (NYSE:NIO) and Rivian (NASDAQ:RIVN). Lucid (NASDAQ:LCID) gained 4.21% during intraday trading but tumbled after the closing bell when it reported its earnings for the quarter. Lucid once again cut its production targets for the year and will make at most 7,000 vehicles. As of the time of this writing, shares of LCID were down by more than 12%.

In a surprise move, Mullen Automotive announced that it is establishing an EV technology team that will be based out of Detroit, Michigan. The Detroit Tech Center will provide research and development for Mullen’s commercial vehicles, and comes on the heels of the company announcing a new technology center in Irvine, California earlier this week.