Update: NASDAQ:MULN added 3.02% on Tuesday and settled at 0.64% despite the poor performance of Wall Street. Despite the optimistic stance of its overseas counterparts, US indexes closed in the red, extending their losing streak for the third day.  The Dow Jones Industrial Average shed 308 points to end at 31,790, while the S&P Composite lost 1.25% and pierced the critical 4,000 mark to settle at 3,980. Finally, the Nasdaq Composite ended the day at 11,883, down 134 points or 1.12%.

Stocks have been on the back foot ever since US Federal Reserve chief Jerome Powell verbalized what most market players suspected. Aggressive quantitative tightening will have a negative effect on economic growth and result in pain for households. Still, the central bank will maintain its current path, while other central banks from around the globe follow Fed’s lead. 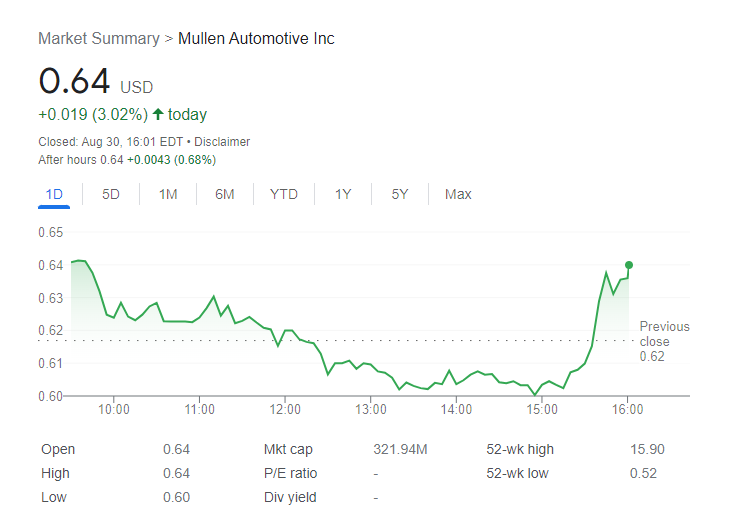 NASDAQ:MULN slipped lower yet again on Monday as the broader markets continued to slide to start the week. Shares of MULN sank by a further 3.03% and closed the trading session at a price of $0.62. The markets opened and closed in the red on Monday as the effects of Chairman Powell’s speech at Jackson Hole last week were still felt around Wall Street. Overall, the Dow Jones slid by 184 basis points, the S&P 500 dropped lower by 0.67%, and the NASDAQ posted a loss of 1.02% during the session.

Electric vehicle stocks extended their declines from last Friday as the sector also started the week on the back foot. Tesla (NASDAQ:TSLA) continued to fall following its stock split last week, and inched lower by a further 1.14%. Lucid (NASDAQ:LCID) and Canoo (NASDAQ:GOEV) joined Tesla and Mullen in the red. Chinese EV stocks were also trading lower as investors are anticipating a soft delivery report for the month of August. Nio (NYSE:NIO), XPeng (NYSE:XPEV), and Li Auto (NASDAQ:LI) all closed the day below water.

Interest is rising in Mullen’s stock as the company announced that the first group of FIVE crossover EVs would be ready to go by October. The company has already announced several new facilities across the country. There isn’t any word on when the models will actually hit the sales floor for consumers but it is promising that Mullen is on track to meet its estimates from earlier this year.