Update: MULN stock price extended its downtrend on Thursday and lost as much as 10.57% of its value, hitting fresh weekly lows at $2.27. The stock price, however, recovered to $2.37 into the closing. The sell-off in the American electric car maker came alongside the tech sell-off in NASDAQ on expectations of aggressive Fed’s tightening. Meanwhile, investors’ perception of the stock as a short-term money-making instrument has also collaborated with the ongoing decline in its share price. The main reason behind the slump could be attributed to the company’s investigation by shareholder rights law firm Robbins LLP to determine whether the management breached their fiduciary duties and violated securities laws.

MULN stock closed lower on Wednesday as the wind was taken out of its sails by a bearish report from Hindenburg Research. The report was titled “Yet Another Fast Talking EV Hustle” so that should give you some idea that it was not positive. MULN stock held up reasonably well though despite this.

We had taken some flak from our readers as we questioned that momentum in Mullen might be stalling before this report came out. It was pretty clear to see as MULN stock had put in four down days and these retail or meme stocks are all about momentum. We should point out that there is nothing wrong with momentum trading. The aim is to make money whether you are trading tulips in Amsterdam or tech stock in the Millenium dot.com bubble. You can trade momentum but you need to manage your risk much more carefully than investing in the likes of Coca-Cola, Apple, etc.

MULN is a momentum play, it is highly speculative. When momentum begins to slow in these names it is time to get out. Wait for it to pick back up again before considering getting back in. With momentum trading, it is best to be slightly late to your entry and slightly early to your exit.

See other EV news on stocks like Tesla and GGPI

So let’s get to the report. Hindenburg claims MULN has misled investors over solid-state batteries. The report says that “despite only spending ~$3 million in R&D in 2021, Mullen claims its solid-state battery technology is on track for commercialization in 18 to 24 months, putting it head of every major technology and automaker in the industry who have collectively invested billions on solving the problem (…) Mullen misrepresented the test results, according to the CEO of the company that performed the tests.”

Hindenburg also claims that the recent order from a major Fortune 500 company touted by MULN are Chinese vehicles rebranded with a Mullen logo: “The 2 electric cargo vans that Mullen claims it will be manufacturing are Chinese EVs rebranded with a Mullen logo. Import records show the company recently imported 2 vehicles from China, one of each model”. The report also contains other fairly shocking claims that Mullen has no EPA certificates, which are required to sell any vehicle in the US. The report also returns to controversy from 2019 when the Mullen Dragonfly was found to be built by a Chinese manufacturer.

The report also details other issues with Mullen CEO David Michery. We should point out we have no way of verifying these claims and we are merely reporting on the Hindenburg report. Hindenburg says it is short MULN stock. As far as we are aware, Mullen has not responded to the report.

Looking past the report to the fundamentals, we had already said in our article on Wednesday that momentum was stalling and questioned that it may be time to get out of MULN stock. This latest spiked had stalled short of the previous one at $4.21. That is the key resistance to maintaining and increasing momentum. Without momentum meme stocks die. $2.06 is now the key support. Breaking below that will see MULN stock likely head sub $1. 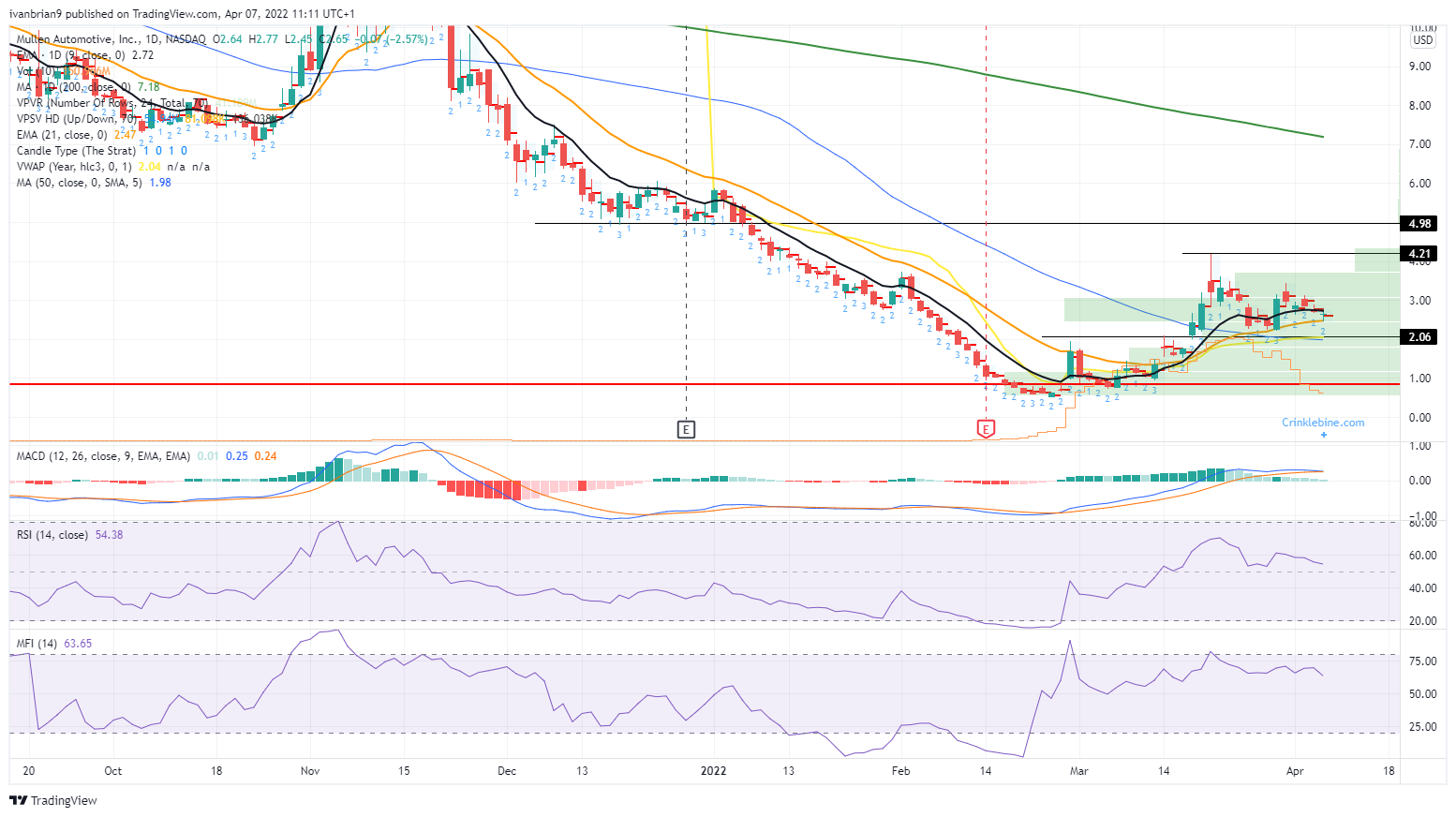 Update: MULN plunged 10.19% on Thursday, ending the day at $2.38 per share. Wall Street started the day in the red, following the lead of its overseas counterparts, but managed to end the day in the green. Gains were modest, as the best performer was the S&P500, adding 0.81%. The Nasdaq Composite gained 0.06%, while the Dow Jones Industrial Average finished the day 87 points higher.

Speculative interest remained warry amid central banks’ hawkishness and escalating tensions between Western nations and Russia amid the latter attack on Ukraine. Kyiv has presented a new agreement proposal, although it includes discussing the situation of Crimea and Donbass, something that Russia considers unacceptable, claiming it goes against its constitution.

Update: MULN stock keeps trading in the red as the EV meme stock is struggling to stay above the intraday $2.50 support. Mullen Automotive has experienced some bearish action after Hindenburg Research published a negative report on Wednesday. The electric vehicle company has been a popular meme stock in the last few weeks, helping MULN stock price turn around after losing almost all its value from November 2020 to January 2021. MULN has been targeted by popular retail trading forums like Wallstreetbets Reddit board as a short squeeze opportunity. March 31st high at $3.31 is the key resistance for bulls to break to the upside.

More woes looks set to be in store for MULN stockholders as the EV stock opens about 5% lower in Thursday’s regular session. More and more media outlets are reporting on the report from Hindenburg on Wednesday which has heightened investor concerns most likely. MULN stock is volatile as ever and has already put in a 3% range in the first few minutes of trading. However, whatever your view on the Hindenburg report, momentum has completely stalled in this name. In our view, that makes MULN stock susceptible to more losses. At the time of writing, MULN stock is trading at $2.57 for a loss of 3%. Already in the first five minutes, the stock has ranged from $2.62 to $2.50. Social media mentions of MULN are also falling, in line with the stock price.