Update: NIO has opened the trading week the same way it finished the last one, by bears dominating price action and sinking the stock a bit lower down. At the time of this update, almost an hour into regular Wall Street trading, NIO share price is down 7% on the day, below $14. The Chinese EV automaker shares are nearing the year-to-date lows of March 15, when Nio opened at $13.25 and reached a $13.01 price. The stock market rout, particularly in high-growth sectors like the electric vehicle one, added to the fears of this stock being delisted for US trading are dismal combination of fundamentals for the NIO bulls, who had enjoyed great success with this one on 2020.

NIO stock once again closed lower on Friday as – surprise, surprise – investors decided the stock was no longer investible in its current guise. NIO stock has fallen over 10% in a week as the potential delisting from US exchanges hits investor sentiment. To recap, the SEC has named numerous potential Chinese firms for delisting due to now complying with the Holdings in Foreign Companies Accountable Act.

The act requires companies to state they are not controlled or owned by the Chinese government. US regulators also require Chinese companies to be inspected by the Public Company Accounting Oversight Board.

NIO stock news: Do US traders care about Singapore listing?

Initially, Nio was not part of the first group of companies named for possible delisting. the most high profile was DIDI which had listed in New York in a highly publicized IPO. That put many Chinese tech stocks on notice and investors took a very cautious view of the sector. However, the SEC did add NIO to its list last week and that led to an immediate wave of selling pressure on the stock.

NIO had already listed in Hong Kong to offset any potential delisting. This was likely done once the initial names were published. NIO then followed up last week by seeking and getting preliminary approval to list on the Singapore stock exchange. Hong Kong is viewed as the primary listing with Singapore as the secondary listing. However, NIO has a strong US-based retail following. Or rather it had, many may have already sold out. Many US retail clients will not have access to trade in Hong Kong or Singapore exchanges and many may not want it irrespective of access.

NIO stock had already been under pressure before this potential for delisting. April delivery numbers had fallen nearly 50% versus March as the Chinese lockdown hit supply and delivery. Nio Inc. delivered 5,074 vehicles in April versus 9985 in March. Other Chinese EV makers XPeng (XPEV) and LiAuto reported simial monthly delivery declines for the same reason.

$13.01 looks to be target for NIO stock as the most recent low and so small support. Given the background, it should break. NIO share price is strongly bearish with $23.94 being the bullish pivot, so quite some distance away. Declining RSI and MFI add to the sentiment and it looks extremely negative. Breaking $13 will bring $10 as an obvious target with a gap to be filled down to $9.38. 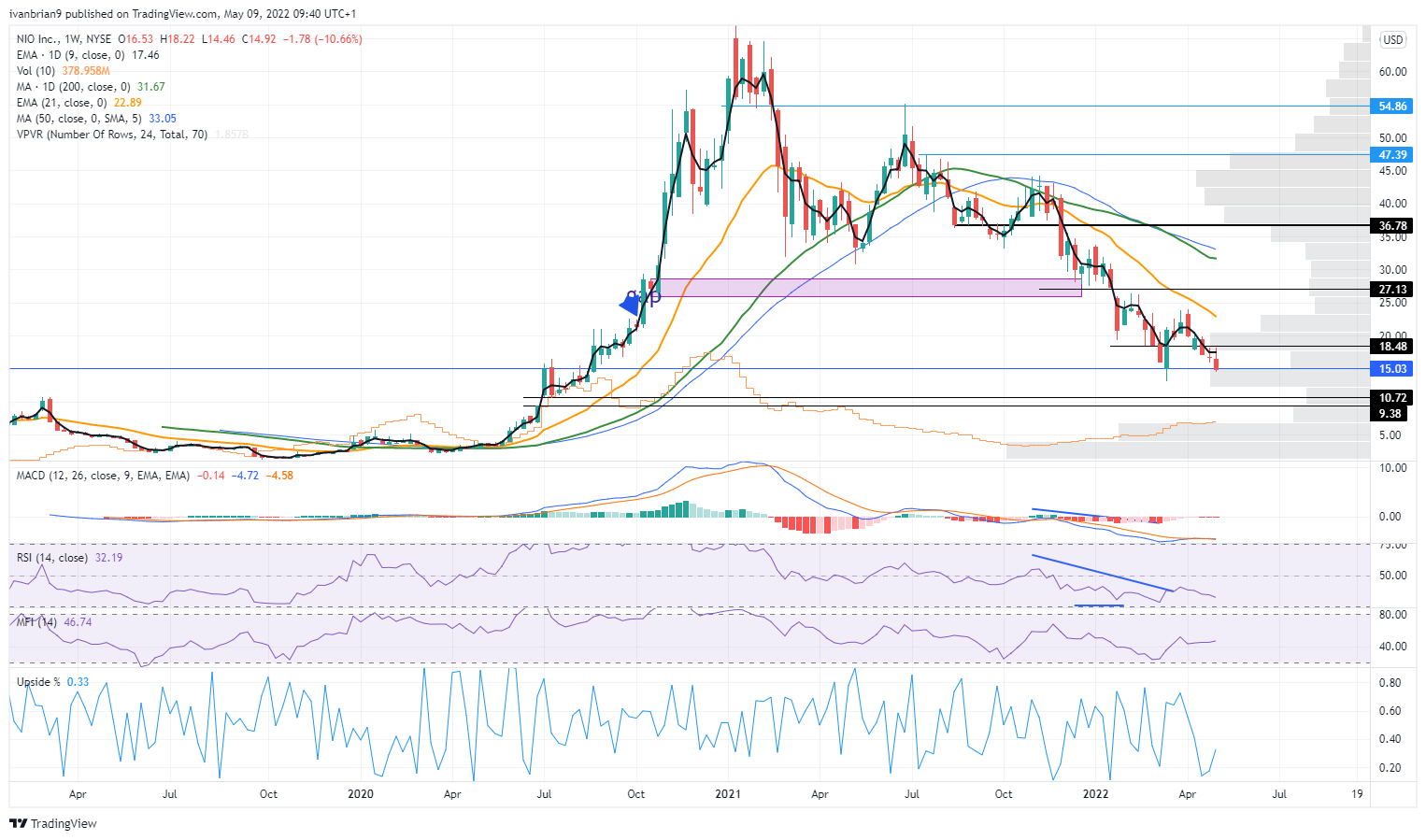