Update: Nio stock is down 3.5% at 10:15am EST to $19.19. This price is important since $19.31 has been a significant volume-based support level that FXStreet has been focused on for some time. With the lack of volume below, NIO shares could likely drop swiftly all the way to $15. Competitors are lower too due to the expected risk-off environment created by Russia’s takeover of a Ukrainian nuclear power plant, the largest in Europe. Rivian (RIVN) is down 2.8% at $49.48, dropping below the psychologically important $50 level. Chinese competitor Xpeng (XPEV) is down 3.4%, while Li Auto (LI) is down 2.2%. Lucid (LCID) is up 1.9% to $23.07, however, and Tesla (TSLA) has risen 1%. The Nasdaq is down 1.7% at the time of writing. EV stocks in general are perceived as high risk, since the industry is relatively new and most producers have not attained profitability.

Another bad day for Nio stock saw it collapse by nearly 9% on Thursday. Nio has now put in three consecutive down days as the market once again heads for the hills and risk assets suffer. This is not all that surprising given the macroeconomic backdrop. We cannot avoid the threats of rising inflation, rising interest rates, the effects of Russian sanctions on global growth, soaring energy costs and a worsening geopolitical backdrop. Some have tried to stand up for the EV sector based on those soaring oil prices, but while that may push consumers into a swifter transfer toward electric vehicles it still pushes up input costs for electric vehicle makers. Shipping costs are going through the roof, and all aspects of global supply chains will see price pressures.

The main problem for Nio in the current environment is that it is still in its growth phase. Growth stocks need a relatively benign macroeconomic environment to thrive. Basically, they need 2020 and 2021 all over again. That is not going to happen. Many EV stocks will fail in the current environment unless things change rapidly. Higher costs and more competition for inputs mean only the strongest will survive. Nio has a better than average chance in my view as it operates in the biggest electric vehicle market in the world, and China does have strong policies to boost EV adoption. Will Nio even survive competition from its own Chinese competitors though?

Data just out from BYD (BYDDF) shows that it sold significantly more vehicles in February than Nio. BYD sold 43,173 EVs in February, a fall of 7% in January due to February having basically three weeks of sales data due to the Chinese Lunar New Year. Sales are up 451% from February of last year though, according to Benzinga. For comparison, Nio sold 6,131 vehicles in February. BYD is backed by Warren Buffet’s Berkshire Hathaway.

Nio also had news of a debt offering late on Thursday. Benzinga cites CnEVPost as reporting that Nio’s leasing subsidiary has raised just over 1 billion yuan ($163 million) through a note issuance in China. Nio stock is currently indicating nearly 2.5% lower in Friday’s premarket.

Breaking $19.39 could see a sharp move lower as Nio enters a volume gap down to $15. The trend remains strongly negative with a declining Relative Strength Index (RSI) and Moving Average Convergence Divergence (MACD). Only breaking $27.34 ends the current bearish setup. 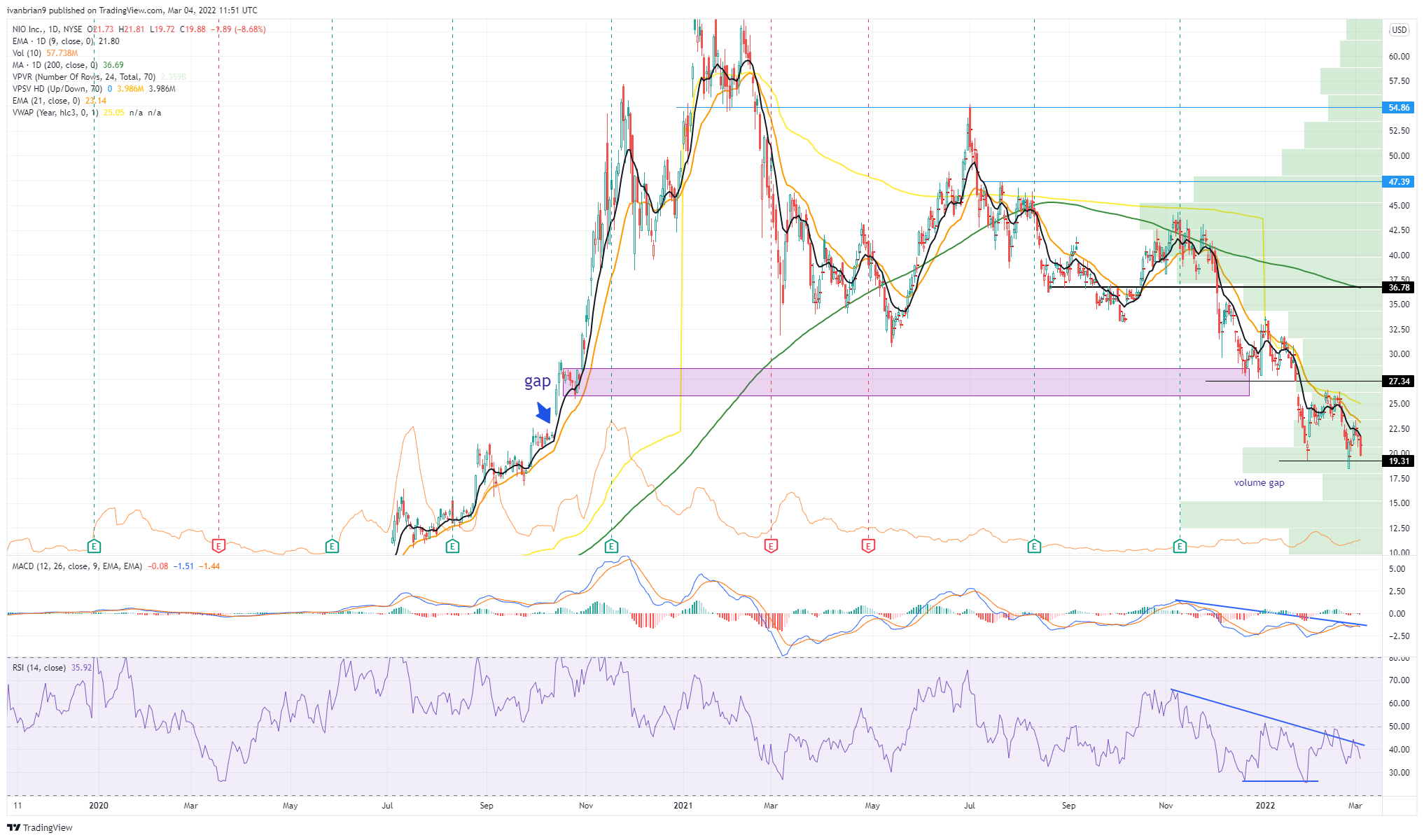 On the more short-term, intraday chart, we can see the importance of this support at $19.31. Volume dries up below. Resistance is at $21 from yesterday’s volume profile and then breaking $23.25 would open the chance for a move to test $27.34. However, we deem this unlikely any time soon. 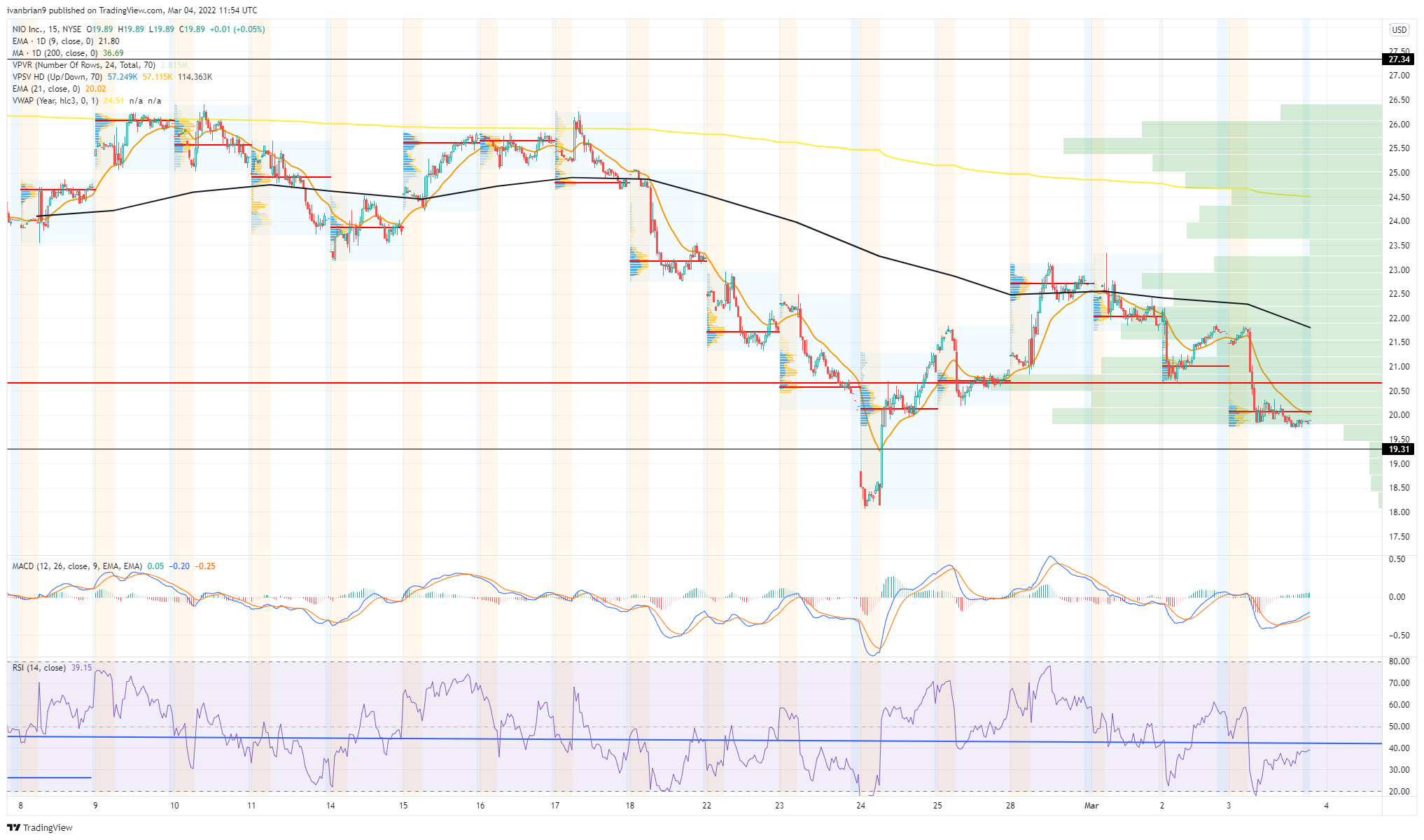 The author is long NIO

Prior Update: Nio stock looks set to open lower on Friday despite a stronger than expected US jobs report. That jobs report has helped index futures to recover some ground. European equity markets remain mired about 3% lower as news of Russia shelling a Ukrainian nuclear power plant spooked markets and led to more risk-off moves across portfolios. The EV sector has been suffering as it is seen as high risk and high growth and so is shunned by investors currently. Rivian (RIVN) and Lucid (LCID) also look set to open lower and so too does sector leader Tesla (TSLA). Earlier it was reported that Panasonic is reported to open a giant US plant to supply a new type of battery to Tesla, according to Benzinga. Panasonic is reportedly looking for land in Oklahoma which would be neat Tesla’s gig factory in Texas.