Update: NYSE:NIO trades with a soft tone ahead of Wednesday’s close, down 0.61% at $41.78 per share. Wall Street traded dully ahead of the Thanksgiving holiday, and with a soft tone, compliments to soaring US inflation. The core PCE Price index jumped to 4.1% YoY in October, its highest in three decades, fueling speculation the US Federal Reserve may need to tighten further its monetary policy. 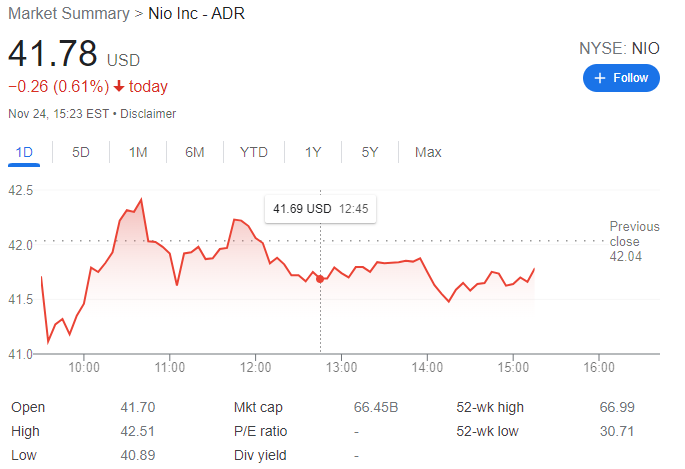 NYSE: NIO continued its strong start to the week on Tuesday and it received a little help from its main domestic rival. Shares of Nio gained 1.33% during the session and closed the trading day at $42.04. Nio extended its gains, which according to Citigroup analyst Jeff Chung has to do with the company finalizing its recent sale of stock to raise capital. Chung says that the company can now move forward to some positive catalysts, including the upcoming Nio Day Event in December, as well as the release of new models in 2022 and further European expansion. Chung reiterated his buy rating, and stuck to his $87 price target for Nio’s stock.

The main catalyst that was moving the Chinese electric vehicle sector on Tuesday was that XPeng (NYSE: XPEV) reported its quarterly earnings in the morning. Nio’s closest domestic rival saw a 187% year over year rise in revenue, and provided guidance for a further 166-182% rise in vehicle deliveries for the fourth quarter. XPeng’s deliveries trumped Nio’s in October, although much of that had to do with Nio preparing its production facilities for the new models that the company will introduce next year.

Electric vehicle industry leader Tesla (NASDAQ: TSLA) experienced a volatile session as it seemed like the stock would carry on higher after Monday’s gains. Instead, shares of Tesla whipsawed into a 4.14% loss for the day as it was revealed that the long-awaited Tesla Cybertruck still does not have a targeted date to begin production. Tesla reports that it has 1.2 million Cybertruck reservations to fulfill, which could put a serious dent into its production capacity once the company finally does begin making the vehicles.