Update, November 15: NYSE:NIO is down4.52% trading at around $40.73 per share, heading into Monday’s close. Wall Street opened the day with gains, but the bullish potential faded as the session went by, with the Nasdaq Composite down 19 points at the time being. Indexes hover around their opening levels as US government bond yields jumped north. 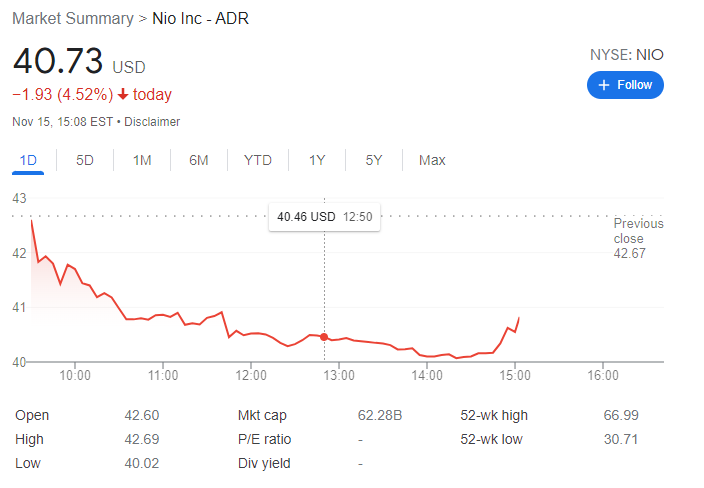 NYSE: NIO climbed higher once again as the stock caps off its third quarter earnings week with another green session. Shares of NIO gained 1.11% on Friday, and closed the final trading day of the week at $42.67. It was quite an eventful week for Nio, as the stock managed to remain positive despite trading lower after a disappointing fourth quarter forecast for the company. The broader markets rose alongside Nio on Friday, as all three major US indices finished in the green. It was a losing week overall though and one that snapped a streak of five consecutive positive weeks, as rising inflation data soured investors on US economic recovery.

One of Nio’s fiercest domestic rivals has announced it will be unveiling a new smart SUV at an upcoming auto show in Guangzhou on November 19th. The news comes conveniently on the heels of an announcement made by General Motors (NYSE:GM) that it will be releasing its Cadillac Lyriq SUV on November 17th to the Chinese market. The move by XPeng also allows it to stay competitive with domestic rivals like Nio, Li Auto (NASDAQ:LI), and BYD which all have electric SUVs already on the market.

In other Chinese EV news, Volkswagen has reported that its EV sales in the country have already surpassed those of Nio, Li Auto, and XPeng. The CEO took to Weibo recently to announce that the company had sold 13,000 EVs in the month of October, which is higher than all three of those domestic EV makers. Early reports were that VW was struggling in China, but the German automaker seems to have overcome those initial issues and is now thriving.