Update: NIO stock price extended its five-day winning streak on Wednesday, settling at $26.10, up 5.71% on the day. In doing so, shares of Chinese Electric Vehicle (EV) maker clinched three-week highs at $26.24. The extended rebound in the Wall Street indices, led by the tech boost, aided the upside in the NIO stock price. The NASDAQ 100 jumped over 2%. Investors continue to cheer Barclays’ analyst Jiong Shao initiation of the bullish on the Nio stock, with an overweight rating and a price target of $34.

NIO stock remains mired as it ended Monday virtually flat. The stock is down over 40% from three months ago as Chinese names see international investors flee on regulatory concerns.

It has been a turbulent time for holders of Chinese tech stocks. Alibaba’s ANT Group spin-off set things off. Then the DIDI delisting not long after its IPO added to woes. Then a host of regulatory crackdowns was the final straw for international investors who bailed out of the names en masse. This is despite the EV names in particular remaining on track from a growth perspective as all have posted strong delivery data. While January deliveries slowed from December, the yearly growth rates still are impressive. January is traditionally the slowest month of the year in China though due to the lunar ew year.

NIO for example delivered 7.9% fewer vehicles in January versus December. On a yearly basis, January deliveries were 33.6% higher. This was replicated across many other Chinese EV names.

Now Barclays has picked up the theme as it issues a bullish note this morning. “We believe that the rapid adoption of EVs around the world and booming EV sales have presented China’s EV makers a rare opportunity to not only take a sizable market share of the domestic auto market – the largest in the world with about 25-30% global share by units sold per annum – but also build a dominant position on the world stage.” Barclays put a $34 price target on the shares.

This does highlight the potential growth potential of Chinese tech stocks and the EV space in particular. We question whether investors will reenter, however, having been let down previously. Fool me once, shame on you, fool me twice… Ok, let’s not have another George W. Bush moment! The point is a valid one. It will likely take more than analyst upgrades to tempt investors back to the space. Goldman, the king of investment banks, has previously been strongly bullish on NIO and to no avail. It will take a series of strong earnings and relative calm in terms of regulatory concerns to eventually tempt investors back.

The recent spike lower did fill the gap from back in October 2020. The market just loves to fill gaps. We also note this spike lower created a shooting star candle, a possible reversal signal. There is already a bullish divergence from the Relative Strength Index (RSI) as shown. The area around $27.34 is the first resistance. Getting back above indicates the bearish trend may finally be slowing. That would then bring NIO into a range-bound zone from $27 to $32. Only breaking $33.80 from January 3 ends the downtrend. Support is at $14 from the strong volume profile. Look for an RSI breakout as that could signal more gains. The RSI has been shrinking in range and may test an upside breakout. 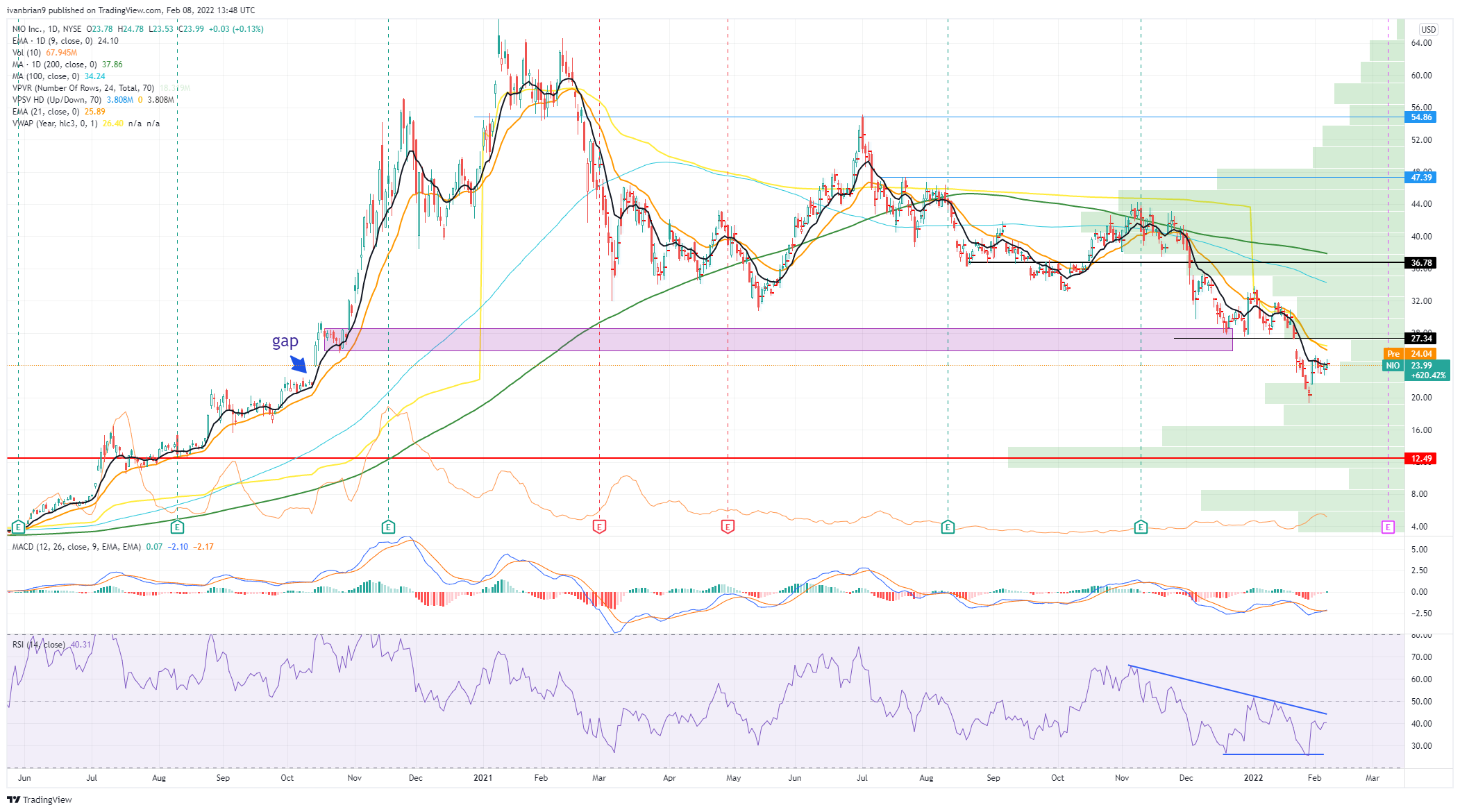 This author is long NIO.

Update: NIO is up roughly 5% on Wednesday, trading at $25.90 per share heading into the close. Wall Street edged firmly higher for a second consecutive day, amid earnings reports and a bounce in the tech sector. The Nasdaq Composite was the best performer, up 1.65% at the time being, while the Dow Jones is at the bottom of the list, up by 0.74%-

Update Nio shares climbed another 3.2% in the early part of Wednesday’s session to $25.48 as most indices were up ahead of oncoming CPI data. The shares have been beaten down in recent weeks but are now up for four consecutive sessions. The EV stock was also blessed with a $34 price target earlier in the week by Barclays.

Update: NIO stock price picked up fresh bids on Tuesday following the previous day’s retreat from multi-day highs. Shares of Chinese Electric Vehicle (EV) maker jumped 2.92% to settle at $24.69, having hit a four-day high of $24.86. The stock price cheered Wall Street analysts’ initiation of the coverage of the company with a strong bullish note. Barclays’ analyst Jiong Shao initiated coverage of Nio, with an overweight rating and a price target of $34. The strength across the Wall Street indices also add to the optimism around NIO stock.

Update: NIO trades 2.83% higher as Tuesday comes to an end, changing hands at $24.67 per share. Following Monday’s soft performance NIO seems to have become more attractive, although it may become more interesting once beyond $25.00. Wall Street posted substantial gains as investors await for an update on US inflation. The country will release January figures next Thrusday.