The NZD/USD begins April on the wrong foot, extending Thursday’s losses and probing the 200-day moving average (DMA) at 0.6907 amidst a deteriorating market mood. With the pair trading at 0.6913, it reflects the appetite for the greenback after a solid US employment report, which, even though it was softer than expected, is close to recovering to pre-pandemic levels.

Market mood and positive US jobs report boosts the USD

In the FX space, except for the New Zealand and Canadian Dollar, commodity-linked currencies like the Australian gain vs. the greenback. However, that does not reflect the current state of the Russia-Ukraine conflict, as the war extended for the fifth straight week while Ukraine shelled a Russian oil deposit in the city of Belgorod. Kremlin’s spokesman Dimitry Peskov condemned what happened, and he said that it “ isn’t what could be seen as creating conditions conducive to the continuation of talks.”

The US Department of Labour reported the Nonfarm Payrolls report for March. The US economy added just 431K jobs to the economy, lower than the 490K estimated. However, the positive is that Unemployment Rate keeps falling, from 3.8% in February to March’s 3.6%, lower than expectations, while Average Hourly Earnings for March rose by 5.6% YoY, higher than the 5.5% foreseen, further cementing the case for a second rate hike by the Fed.

Later the US ISM Manufacturing PMI, a leading indicator for the industry, fell to 57.1 in March from 58.6 in February, well below the 59 estimations by analysts.

The US Dollar Index, a measurement of the buck’s value vs. a basket of currencies, is rising 0.40% sitting at 98.710, underpinned by high US Treasury yields. The US 10-year benchmark note yield rises ten basis points, at 2.428%, though lower than 2s, which are at 2.456%, inverting the curve for the second time in the week.

Friday’s price action extended the NZD/USD losses and it “confirms” that a double-top chart pattern is in place. In fact, at press time, the pair is testing the 200-DMA and earlier reached a daily low at 0.6895, 20 pips short of the double-top neckline, which might send the NZD/USD towards 0.6780, as measured by the neckline to the highest top. 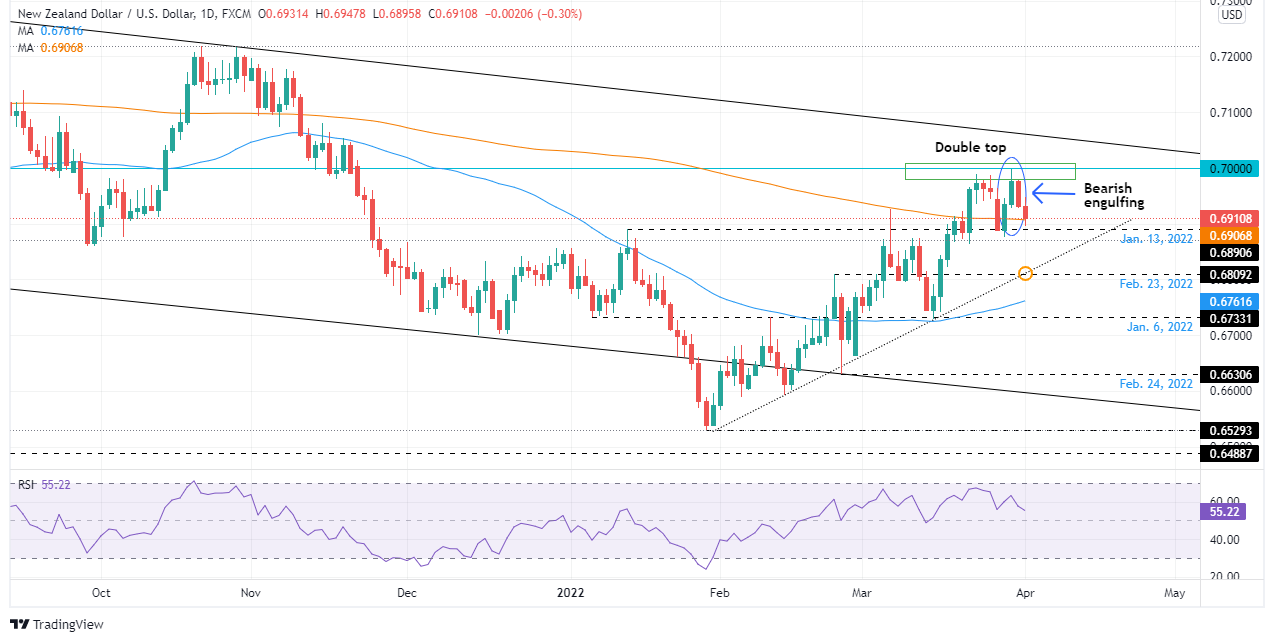