The NZD/USD begins the week with losses as it drops during the New York amid a risk-off market mood, due to the continuation of Russia’s invasion of Ukraine, as peace talks stagnate. At the time of writing, the AUD/USD is trading at 0.6892.

Meanwhile, US Federal Reserve Chair Powell is crossing newswires. He said that economic projections could become outdated at times like this. Furthermore, he said that Fed’s actions and balance sheet reductions would bring inflation at the bank’s target of 2% in three years. Powell added that the central bank would set policy looking at the actual progress on inflation and emphasized that the Fed would hike more than 25 basis points if needed.

Elsewhere, the Russia – Ukraine conflict extends for the fourth consecutive week. Over the weekend, Ukraine’s President Zelensky said that he was ready to negotiate with Russian President Vladimir Puttin, but Turkish officials said Putin was not. Moreover, Moscow said the progress of talks with Ukraine is not as big as it should be, backpedaling on what they said to the Financial Times last week

Aside from this, in the last week, the US central bank hiked rates for the first time in three years while also signaling that it is ready to raise rates six more times through 2022, per the dot-plot shown. The markets have started to price in expectations, while Fed speaking dominates the US economic docket.

On Monday, Atlanta’s Fed President Raphael Bostic said that he predicts six hikes In 2022 and expressed that he would be “comfortable” if the Fed needs to hike aggressively. Bostic added that inflation would return to 2% by 2024 while hitting 4.1% by the year-end.

The NZD/USD is neutral-upwards but facing solid resistance at 0.6910, the 200-day moving average (DMA). Nevertheless, the NZD/USD broke above the 50 and 100-DMAs since last Wednesday, but a daily close above the 200-DMA is required to extend the uptrend further. 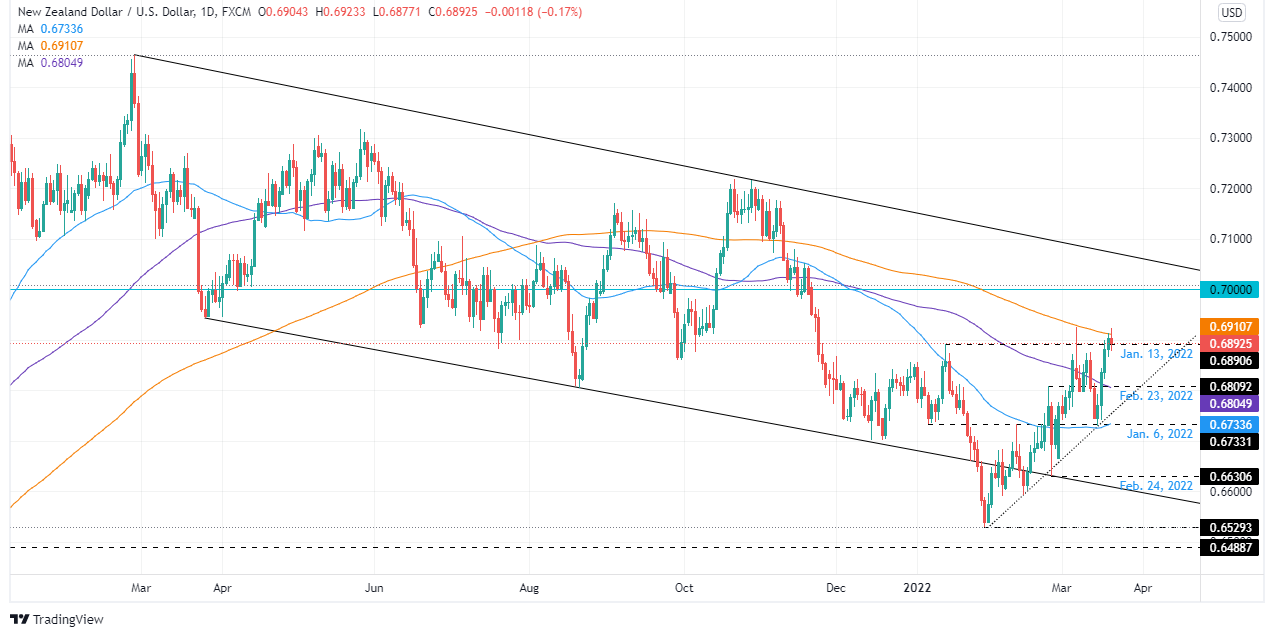