Palantir (PLTR) will get its chance to return to the limelight today when it reports earnings before the market opens. The former retail favourite (and that of Cathie Wood) has taken a back seat of late, while some other meme stocks have roared back into life. Palantir though could change all that with a strong set of earnings. The stock has form in this regard. The last earnings in August saw a strong beat on earnings per share (EPS), and revenue also topped analyst forecasts. Palantir has beaten revenue forecasts for the last four straight quarters.

Palantir was strong apparently in relation to the news that Rio Tinto (one of its customers) had made a significant tunnelling breakthrough. Palantir released comments saying, “In the three months preceding the completion of the excavation stage, and after a pause in work necessitated by COVID-19, Rio Tinto deployed Palantir Foundry to help achieve a 150% improvement on its excavation rate (measured in meters daily) – a significant productivity improvement. Palantir Foundry has helped the Kemano site teams improve their operational processes – with ring-build times significantly reduced by the end of the project and materially decreasing excavation delays by optimizing cycle times.”

The deployment of Palantir Foundry at Kemano is one of many projects taking place within the multi-year enterprise contract announced by Rio Tinto and Palantir in February this year.

This one has been volatile in keeping with retail stocks, and the trend is not so clean. However, recently some life has seeped back into PLTR stock, and the potential is there for a breakout. To start with, we are still setting a series of higher lows both in short and medium-term timeframes. We can see why PLTR is struggling to break out as it is at a very high volume area with the 200-day moving average at current levels as well as the yearly Volume Weighted Average Price (VWAP). Since there is a lot of stability at current quotes, high volume means equilibrium between buyers and sellers. There is no strong urgency to move.

PLTR set a perfect double top in September, which we commented on, and this led to PLTR falling back to $23. Crucially for medium term players, PLTR did not retrace to the most recent low and so set a higher low. Now all the stock needs to do to confirm this pattern is to break the double top at $29.29. This will then open the door for a move to $31.34, filling the gap from February and then targetting $38.21 highs. 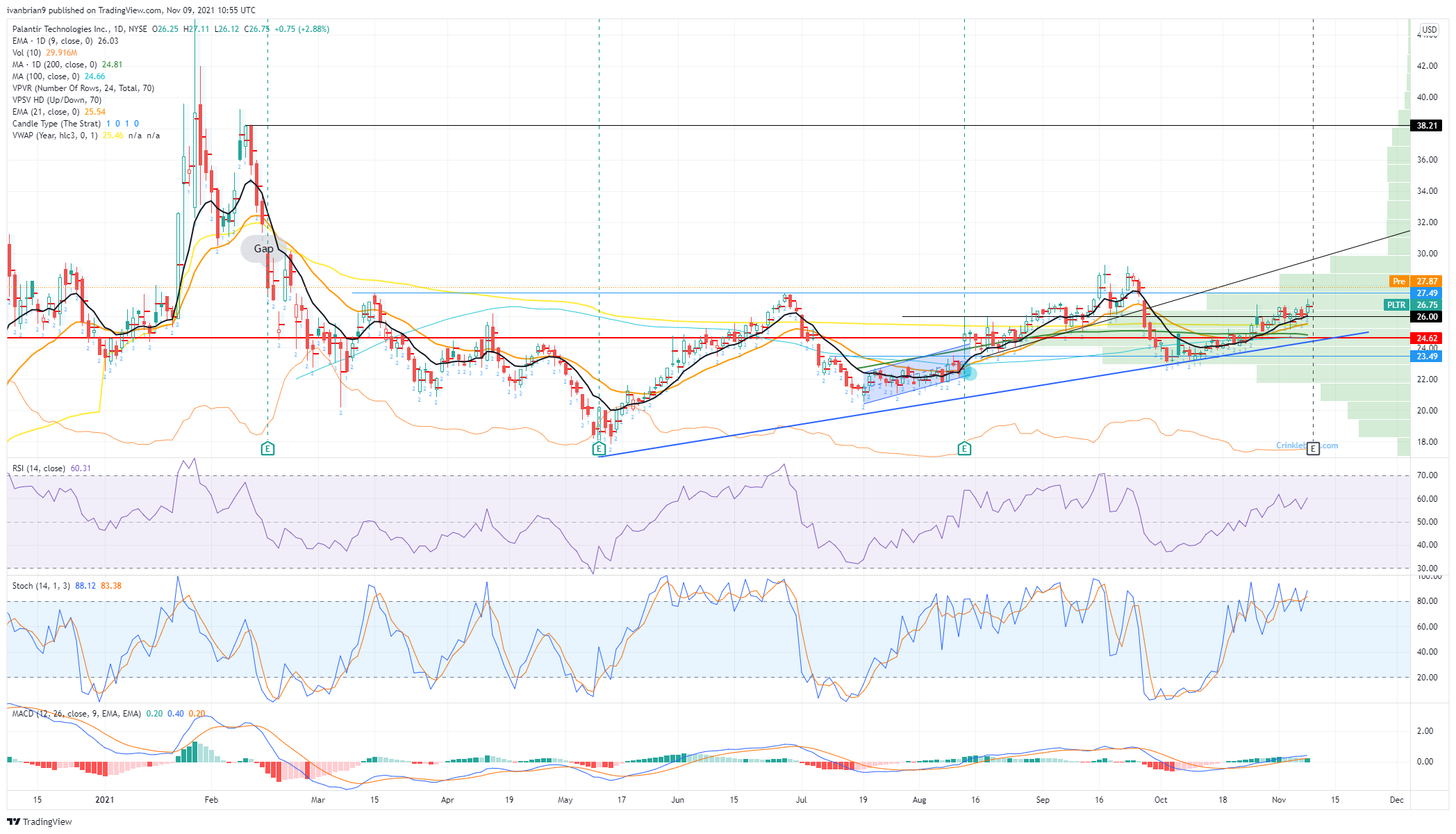