Rivian (RIVN) finally had a down day on Wednesday, its first one since IPO’ing last week. What goes up must come down, and Rivian stock dropped a fairly heavy 15% as momentum finally dried up. There has been a lot of talk in markets recently of how Rivian may well end up being the poster child for another top-of-the-market moment before a stock market fall. Whether that turns out to be true or not remains to be seen, but we cannot ignore the fact that this valuation is crazy.

When a company with a relatively small amount of pre-orders, not deliveries, is the third-largest automaker in the world by market cap, then you know something somewhere has gone wrong with global markets. However, we also know that many of you are short-term or swing traders and do not really need to concern yourselves with valuations and P/E ratios. You are correct that playing momentum and managing your risk are the two most important ingredients here. Yes, markets can fluctuate wildly away from fundamental valuations, but if your timeline is short-term this is not your concern.

Jim Cramer echoed these thoughts on CNBC last night: “Remember, you’re playing momentum, not car companies and not technology, and in that case it’s better to ring the register early and often.” Cramer was reminding investors and traders of what happened during the Dotcom bubble crash in 1999/2000. There were plenty of opportunities to make money back then he said, but apart from Amazon most did not provide any long-term returns. This means you can play the momentum quickly and carefully but book profits often.

Normally, with such a steep fall, that of 15%, there would usually be some underlying catalyst: bad earnings, etc. This one is pure momentum though. Momentum on the way up and now momentum, or lack of it, on the way down. Even after Wednesday’s heavy fall, Rivian stock is still up over 100% from its IPO just last week.

Even though the chart is still in its infancy, it is already showing some good signs of technical adherence. The move yesterday retraced back to find support at Monday’s point of control at $145. The point of control is the price with the highest volume and so an equilibrium. Monday’s point of control and Wednesday’s are identical. That creates strong volume profile bars on the right of the chart below showing areas of price stability. Below $140 there is a vacuum until $130, so watch out for a move through $140 to accelerate. 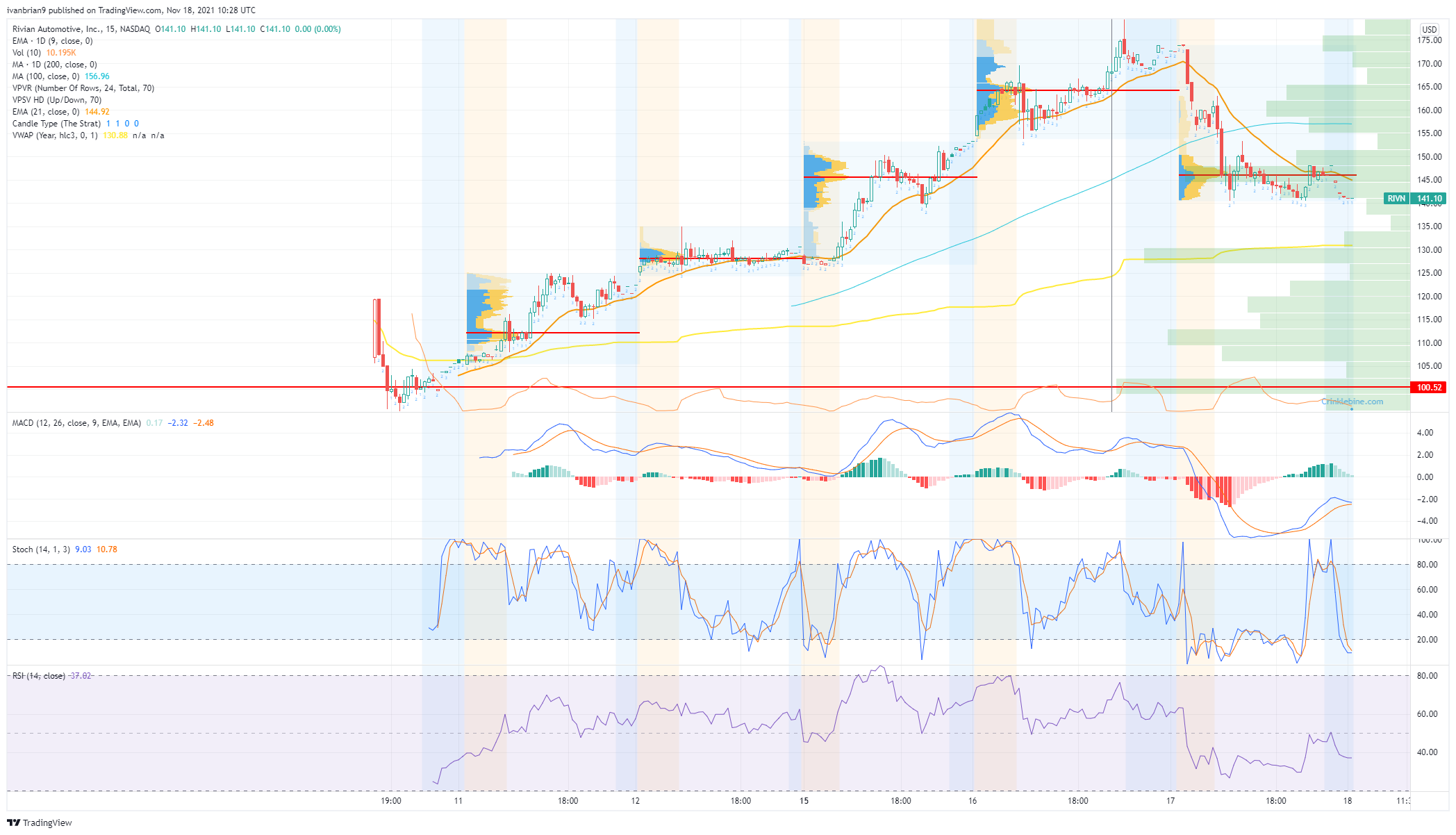