Rivian (RIVN) investors got a lesson in the speed with which momentum can shift in financial markets as losses accelerated last week. Breaking the IPO price of $78 really accelerated the move lower, and the stock ended up losing nearly 20% on the week. We had initially spoken of a break of $100 likely leading to a move to test the IPO price, which would then set more losses in place. Our target of $75 was duly achieved, and now we have to reevaluate.

There is nothing too dramatic or company specific to explain away such heavy losses. Rather what we are seeing is a repricing of risk to more appropriate levels. This is a healthy outcome overall as many parts of the market were reaching valuation levels that could not be sustained. This correction, across growth names in particular, may actually have helped avoid a bubble style crash that would have had a more detrimental effect. Certainly, some reports last week will not have helped some early-stage EV companies.

Bank of America came out last week with a sobering analysis of the EV space and predicted that Tesla could see its market share drop from 69% to 19% of the sector by 2024. The note explained what we at FXStreet have been mentioning for some time. That is the EV space is soon to merge with the existing auto space, and that means a lot more competition. Tesla has enjoyed a free run in this part of the industry as it virtually invented it. It is starting to face some stiff competition however. While that article may be overall pessimistic, it does bring to investor attention the sobering thought that if EV leader Tesla suffers that fate, then what of startups such as Rivian .

The stock has been suffering anyway as backer Amazon (AMZN) looks to other automakers to fulfill some of its needs. Amazon recently announced a deal with Stellantis (STLA). The ecommerce king has an order with Rivian for electric vans that helped the latter garner credibility, but given Amazon has such huge needs it seemed inevitable that it would have to use multiple suppliers. However, the news did not sit well with Rivian investors and shed more light on the precarious nature of the start-up business.

We should also note that Amazon’s order with Rivian is not binding and can be canceled or modified. Amazon does not have to buy any vehicles from Rivian should it so choose. Amazon has exclusive rights to Rivian delivery vehicles for four years after receiving the first one and Amazon also gets the first right of refusal to buy the delivery vans for two years after.

From the Rivian SEC filing, pre-IPO: “In the near-term, however, we expect that a significant portion of our revenue will be from Amazon Logistics.” …”We also have agreed under the EDV Agreement that until the fourth anniversary of when Logistics first receives EDVs (the “Initial Delivery Date”), whether or not Logistics purchases any EDVs from us, we will exclusively provide last mile delivery vehicles to Amazon, and from the fourth anniversary to the sixth anniversary of the Initial Delivery Date, Amazon will have a right of first refusal to purchase last mile delivery vehicles that we produce.” …”If we fail to adequately perform under the EDV Agreement, if fewer EDVs are purchased than we anticipate, or if either party terminates the EDV Agreement for any reason, our business, prospects, financial condition, results of operations, and cash flows could be materially and adversely affected.”

The market may have overlooked that dependence, but news of Amazon and Stellantis has brought renewed attention to it.

$78 is clearly the first resistance and break-even point for many investors. The longer Rivian stays below, then the more selling pressure that will come on holders to exit. Above there, $88.39 is the next resistance. Support is in short supply obviously as this is unchartered territory, but the trend remains strong to the downside with the Relative Strength Index (RSI) having more room before becoming oversold and the Moving Average Convergence Divergence (MACD) remaining crossed. 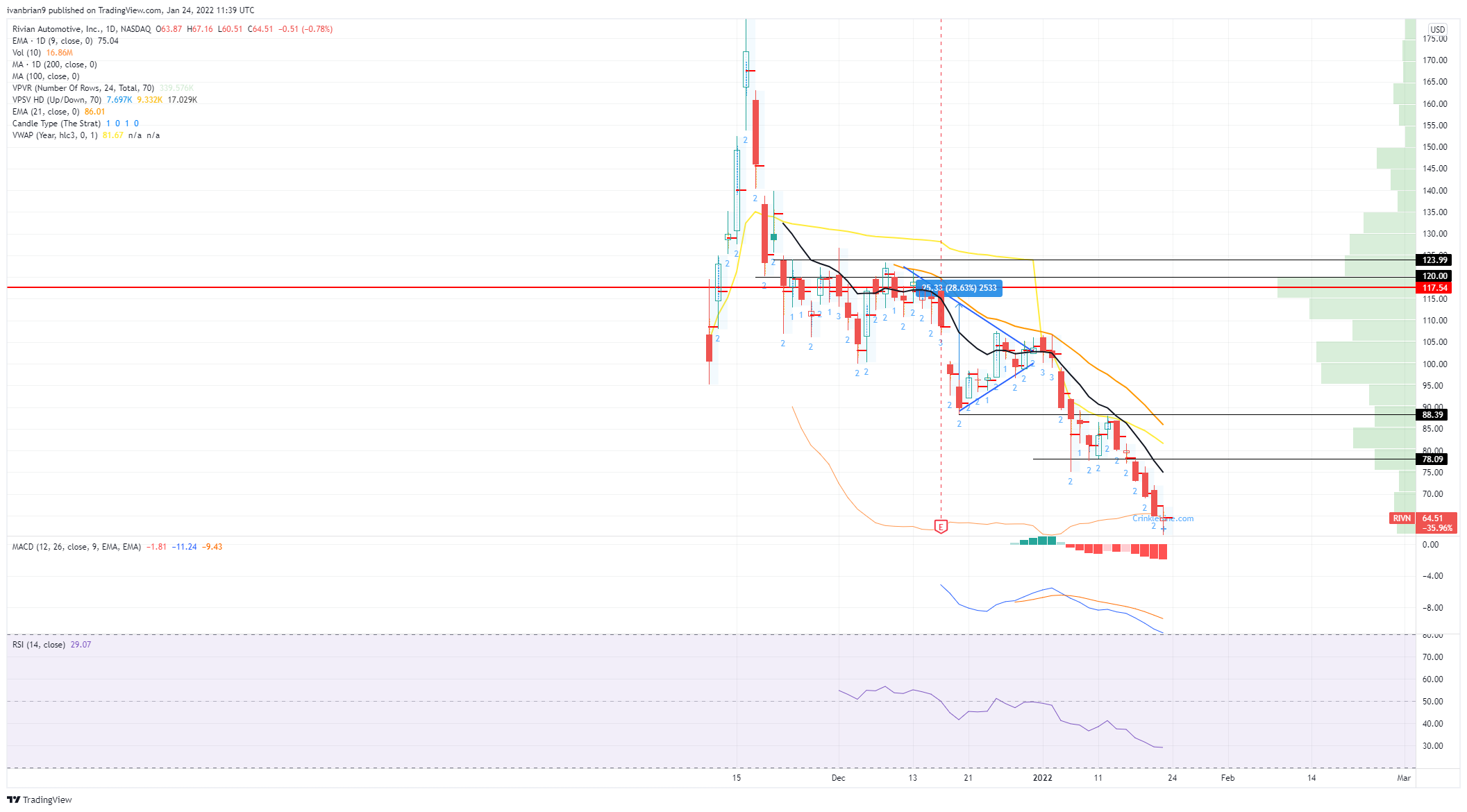