Update: Sundial Growers stock is down 6.8% to $0.7252 one hour into Tuesday’s session. The beloved retail name announced that its acquisition of Alcanna will be finalized as soon as March 31 and that it will release its full-year 2021 financial statements, which are overdue due to auditing requirements, no later than April 14. The stock tanking is surprising as the Nasdaq Composite index is up 0.9% at the same time. You know what they say, all price action is local.

NASDAQ: SNDL saw its ten-day winning streak come to an end on Monday, as the Canadian cannabis stock dipped to start the week. Shares of SNDL fell by 4.19% and closed the first trading day of the week at $0.77. The markets started another week in the green as all three major indices closed the session higher. The Dow Jones eked out a small gain, adding 94 basis points, while the S&P 500 rose by 0.71%, and the NASDAQ led the way once again climbing higher by 1.31%. Stocks are coming off their second consecutive week of gains after the Federal Reserve raised interest rates by a quarter basis point.

On Tuesday, Sundial Growers is set to report its quarterly earnings report after the markets close. Looking back to the third quarter report, Sundial reported net earnings of $11.3 million CAD. Perhaps the thing that got investors most excited was the $100 million share buyback plan that management announced. This was a direct reference to the massive share dilution the stock has seen as the company takes advantage of the spikes in price. Recently, Sundial has been making headlines due to the US House Rules Committee discussion of federal legalization for the cannabis industry. 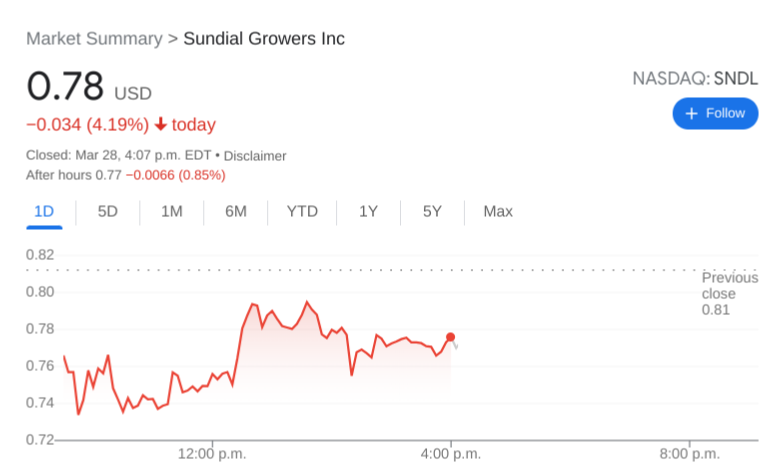 Even though Sundial was trading lower, other meme stocks were surging on Monday. GameStop (NYSE:GME) jumped by 24.73%, while AMC (NYSE:AMC) gained 44.95%. AMC was moving higher due to an announcement from CEO Adam Aron that AMC would be aggressive in mergers and acquisitions including an investment in Hycroft Mining earlier this month.