Just when we thought it was safe to reenter positions, we get smashed back. Always the way in trading and markets. Just when you think you have it sussed, the market knocks you and your confidence back. That said, despite everything that happened on a very eventful week, the indices are actually little changed. So the calmer investor just looks and wonders what all the fuss is about.

So let us dig in. Firstly, we have the underwhelming Fed rate hike: 50 bps points as expected, but it was the somewhat surprisingly dovish commentary that sent equities roaring on Wednesday. In particular, taking a 75 bps hike off the table was seen as especially dovish. Equities rallied.

The first signs of stress began to emerge on Thursday morning with bond yields creeping back up and the dollar recovering. The Bank of England then whacked everything when it was incredibly bearish. The BoE raised interest rates but said a recession is imminent basically. This caused momentous dumping of the pound sterling and the contagion spread to US investors who noted the bearish commentary took one look at rising yields again and panicked, sold tech and then everything.

So where are we then? Well, the just-released employment report should calm things a little. Lower than expected on the average hourly earnings front and a still strong emplyoment market. Yields have moved lower and soo has the US dollar. Equities have moved moderately higher.

This one is hard to play. Basically, we are witnessing a classic, it’s tied in a high-scoring game with 3-pointers going in all over the place. We are unchanged so let’s go again!

Thursday was a 90%+ down day. This means that over 90% of all NYSE stocks closed lower on the day. We are struggling to find anything in the green, apart from Twitter (TWTR). There is some interesting work around the rarity of 90% down days from Lowry research.

So let’s see if this is really a bottom or not. The catalyst is an 80%+ up day within four sessions on a volume spike. Ok, a bit complicated so I will keep you updated if and when it happens. For now, our levels are unchanged.

We did witness contrarian sentiment from various metrics earlier this week, CNN Fear and Greed, AAII sentiment and Goldman Sachs sentiment. It appeared everyone front ran these sentiment readings as they worked well the last time. This led us to rethink the rally and hold for sub $400 on the SPY. “You’ll have cleared out all the suckers by then”!

The employment report may cause us to rethink that strategy but we would like some confirmation from the market itself first. Always good to see the reaction to good and bad news, that is the real test of sentiment. Equities should rally on the back of that report, if they don’t then stick with our sub $400 entry. 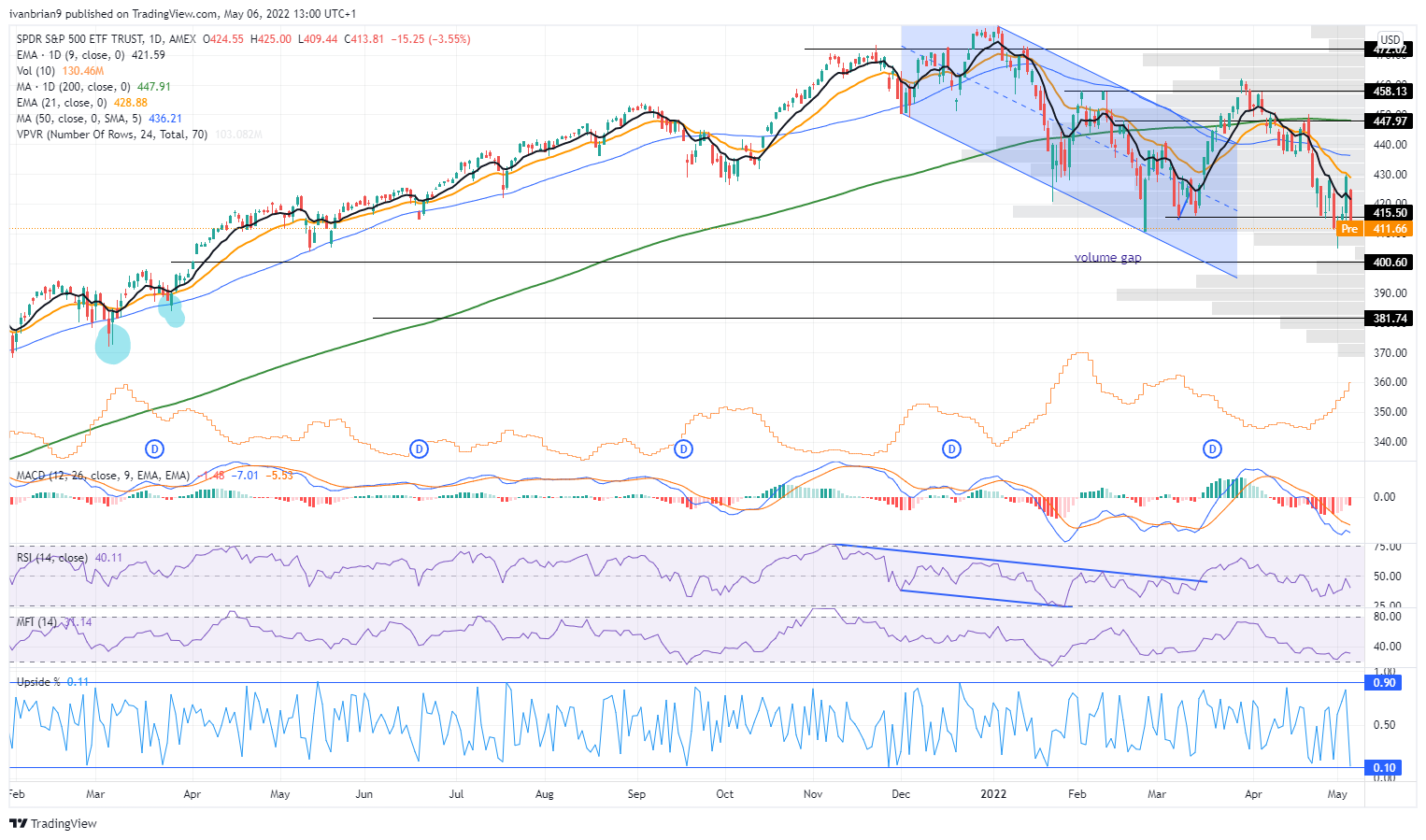