Tesla (TSLA) stock suffered another humbling day on Wednesday as it yet again suffered more steep losses. As the broader equity market appears to crash, so too does the Tesla share price. This time it dropped by 8% to trade into the low $700s. $700 was the low seen back in February when market panic sold the Ukraine invasion news. Since then Tesla has recovered and held up well. Part of this was the reasonably good earnings quarter it posted. Now though a combination of macro factors and the Twitter (TWTR) deal are weighing on the stock.

The latest Tesla recall news hit yesterday, and that certainly helped the stock underperform all the main indices. Tesla has had to recall 130,000 vehicles due to CPU problems affecting the central display unit. There have been a number of recalls for Tesla vehicles this year, none of which seems to have hindered the share price. But this environment has turned more bearish, and any bad news is seized upon. This week we also have had news of a supply problem hindering production at Giga Shanghai, which comes just days after getting the factory back online after covid lockdowns. Adding to pressure on Elon Musk but not directly attributable to Tesla is a report from The Wall Street Journal saying that Elon Musk is facing a federal probe over delays in his filing for his initial stake in Twitter.

We also note a report from Bloomberg saying smaller investors and hedge funds will get the chance to invest in the Twitter acquisition by way of special purpose vehicles that pool money together. The minimum investment is $5 million. This is not reassuring in our view. Still scrambling around for investors at this late stage in this type of market does not inspire confidence in the deal going through in its current guise. Hindenberg Research also released a report outlining similar concerns last week.

$700 remains the key support and target for now. As long as this holds then, there is the chance of a strong bear market rally. But it likely is getting too close for comfort now and should be triggered today. That level most likely has stops just beneath, so it could spike lower on a beak. That would then be the time to reassess. Both the Money Flow Index (MFI) and the Relative Strength Index (RSI) are close to oversold, and a break of $700 could put both into oversold territory. Breaking $700 brings $620 as the next support. Resistance and the bullish pivot is all the way up at $945 now. 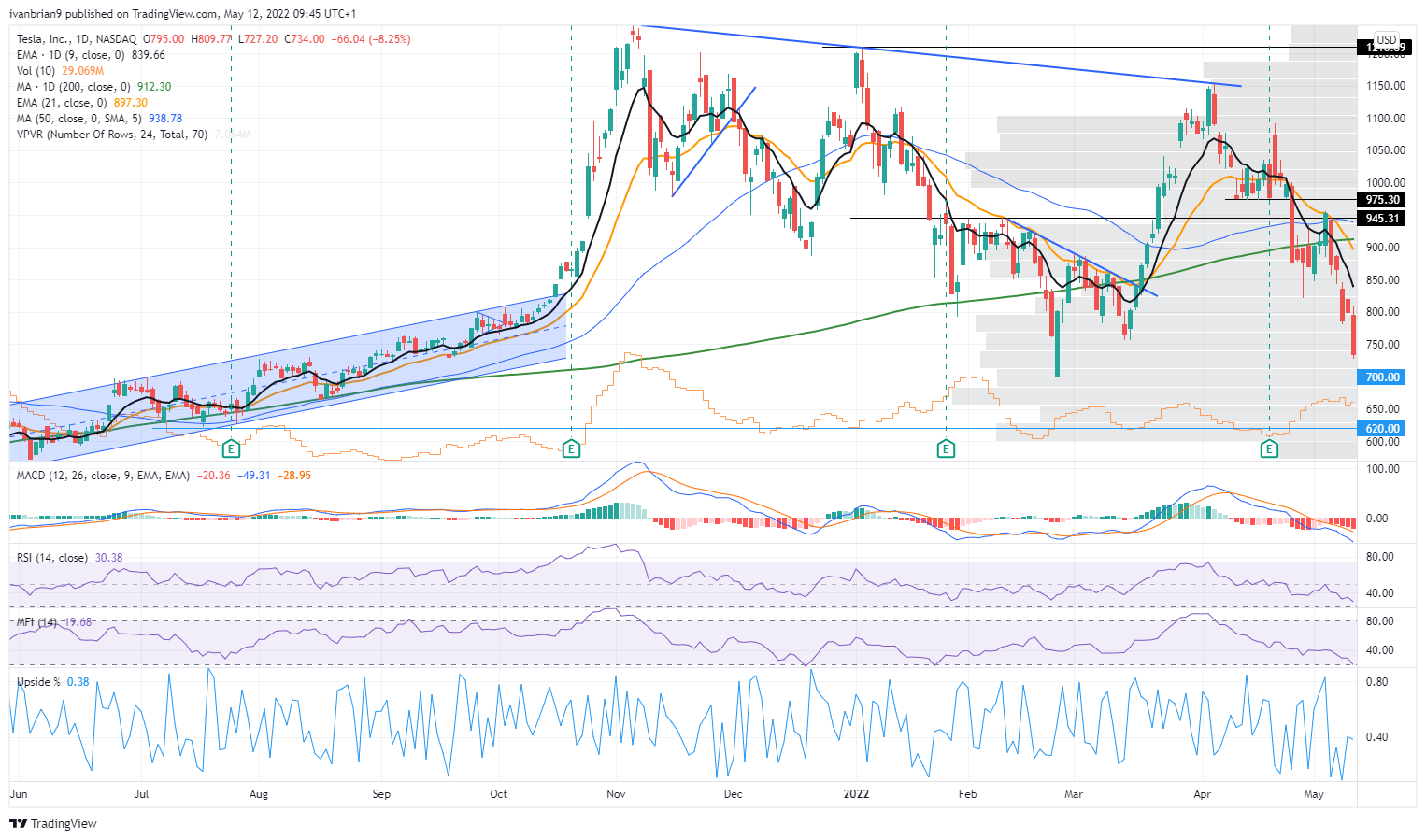