UPDATE: Upstart finished Wednesday down a modest 0.33% at $48.34 per share. It could be considered quite a good performance, taking into account that Wall Street plunged. The Dow Jones Industrial Average lost 1,164 points, while the S&P 500 lost 4.21%. The Nasdaq Composite was the worst performer, finishing the day down by 4.73%. Financial markets entered panic mode during US trading hours, after the EU, the UK and Canada reported inflation figures, doubling or even tripling central banks’ comfort levels. Additionally, two US institutes, Wells Fargo and S&P, downwardly revised growth forecasts, but expect inflation to remain high. 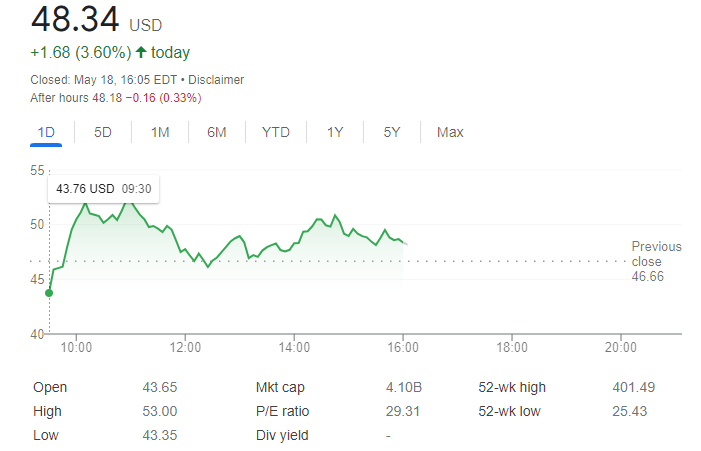 Previous update: Upstart surprised again on Wednesday when its share continued with Tuesday’s 23% rally. UPST stock is up 9.6% an hour into the session at $51.15. Shares made it as high as $53 earlier in the session, which put it well above 10% for a brief period. This rally has now brought the popular AI lender above the 9-day moving average, which is surprising since the stock collapsed by more than 50% in the previous week. Next bulls may target the 21-day moving average at $66.21. This rally is all the more surprising, because the Nasdaq has given up 1.7% at the same time.

Upstart Holdings (UPST) stock shot up 23.5% on Tuesday to $46.66 after Upstart’s annual shareholder meeting affirmed shareholders’ interests on two separate fronts. This move was a breath of fresh air to longtime shareholders, who experienced the AI lending company losing nearly 55% of its value in the previous week. UPST shares are still down 68% in 2022 after falling from an October high north of $401.

Upstart’s annual shareholder meeting relented to investor pressure on several policies that have caused anxiety of late. In that sense, it acted as a salve or a therapy session for investors who have seen their investment crash by as much as 90% in the past year.

First, in Upstart’s latest quarter, most shareholders were disgruntled to find out that the lender was now carrying $600 million worth of loans on its balance sheet. This was up from about $250 million at the end of the fourth quarter. Normally, Upstart’s partner banks or institutional investors buy the loans that Upstart originates with the firm simply making fees from the transactions.

CFO Sanjay Datta explained that the increase in loans on the balance sheet was a product of two separate strategies. First, Upstart has been moving into a new sector – auto loans. As such, it needs to retain a certain amount of the new loans on its balance sheet for research purposes that may lead it to tweak its lending algorithm in subsequent quarters or years. Second, because the credit market has been shaken by the new interest rate hikes by the Federal Reserve, credit markets have been in flux. In order to stabilize its day-to-day operations and retain its fast pace of loan growth, occasionally it has used its cash hoard to fund some loans itself as bridge loans until its funding partners returned.

“We did sort of $4.5 billion in originations, and I think [the bridge loans] amounted to maybe $150 million,” Datta told the audience. “In retrospect, we were a little caught off guard by the market reaction to this. In the future, I think the decision is going to be to just accept volume volatility and not wade into the platform with our balance sheet as a stabilizing mechanism.”

This win by shareholders was matched by a further promise to reduce the number of research loans the lender keeps on its balance sheet. Succumbing to shareholder pressure resulted in UPST’s massive rally.

Separately in a 13-F filing, Dan Loeb’s Third Point hedge fund exited its stake in Upstart in the first quarter, mostly opting instead for safer value investments in the railroad and oil sectors. The vast majority of Upstart’s sagging share price in the past year can be attributed directly to a broad move by institutional investors toward safer investments as interest rates rise to counteract inflation.

Does this mean UPST stock is back on the straight and narrow, ready to soar to new heights? Not so fast. Most of the market will remain wary of UPST for the next several quarters as they wait to see how Upstart’s business model reacts to higher interest rates. On average the lender’s loans have already surged by three percentage points, which normally would make them less attractive to would-be borrowers. Upstart has existed entirely in a falling rate environment over the past decade, so this is a real test of its metal.

Second, to even look like it can sustain a rally, Upstart stock needs to close above the 9-day moving average. That average is currently at $51.89, and with the share price lower in the premarket it would appear like a back-to-back rally is not in the cards.