At 102.868, the DXY index is down 1% and has fallen from a high of 103.877 to a low of 102.657, extending its pullback from a two-decade high on the last day of the week. The greenback has fared poorly against riskier currencies, as measured by the DXY index, which tracks the greenback against six major currencies, falling to its lowest since May 5.

The index hit a near two-decade high last week as a hawkish Federal Reserve and growing worries about the state of the global economy helped lift the greenback to score some 7.5% higher for the year so far. However, there has been a sense that the US is leading to a recession and a hard landing may not be favourable for the greenback.

Nevertheless, Fed officials remain hawkish and there has been a series of speakers this week, including the Fed chairman whose comments during an interview with the Wall Street Journal were the most hawkish yet. He said the Fed will have to slow growth to bring inflation back down to its 2% target. Raising interest rates will tighten financial conditions, which affects the economy, but he warned, “we don’t have precision tools.” “There could be some pain involved,” he said, “but we think we can maintain a strong labour market, defined as a labour market where unemployment is low and wages are moving up.” “It may not be the perfect labour market, but it will be a strong labour market,” he added.

His remarks were followed up on Wednesday by Fed’s Charles Evans saying that the Fed will likely hike rates above neutral. “If we go 50 bp beyond that, if we go 75 bp beyond that, then that restrictive setting of policy should be working to bring inflation down.” Evans added that “My own assessment of ‘neutral’ is in the 2.25-2.5% range.”

Fed’s Patrick Harker also commented yesterday and said “We don’t want to overdo it. But we have to act and we are acting.” He added that the US may have a few quarters of negative growth, but that is not what he is forecasting. Lastly, Harker said the Fed can engineer a “safe” if not “soft” landing for the economy.

On Thursday, Kansas City Fed’s Esther George noted that financial conditions are starting to tighten and said that it would take “something very different” to support larger rate increases. George added that she is very comfortable with 50bps rate rises.

In this regard, analysts at ANZ Bank said that while ”tighter financial conditions are of course needed to reduce demand and bring inflation down, the pace at which financial conditions have tightened may push back against a 75bps rate rise next month, unless of course the Consumer Price Index and labour market data are exceptionally strong. A key question, however, is how quickly will labour demand slow?”

Meanwhile, today’s weekly initial claims were showing early signs of trending higher from their record lows in March, which analysts at ANZ Bank said ”may be a very early indication that demand for labour is beginning to ease a little. But it’s early days, and with 1.9 job openings per unemployed person, the US labour market remains extremely stretched.” 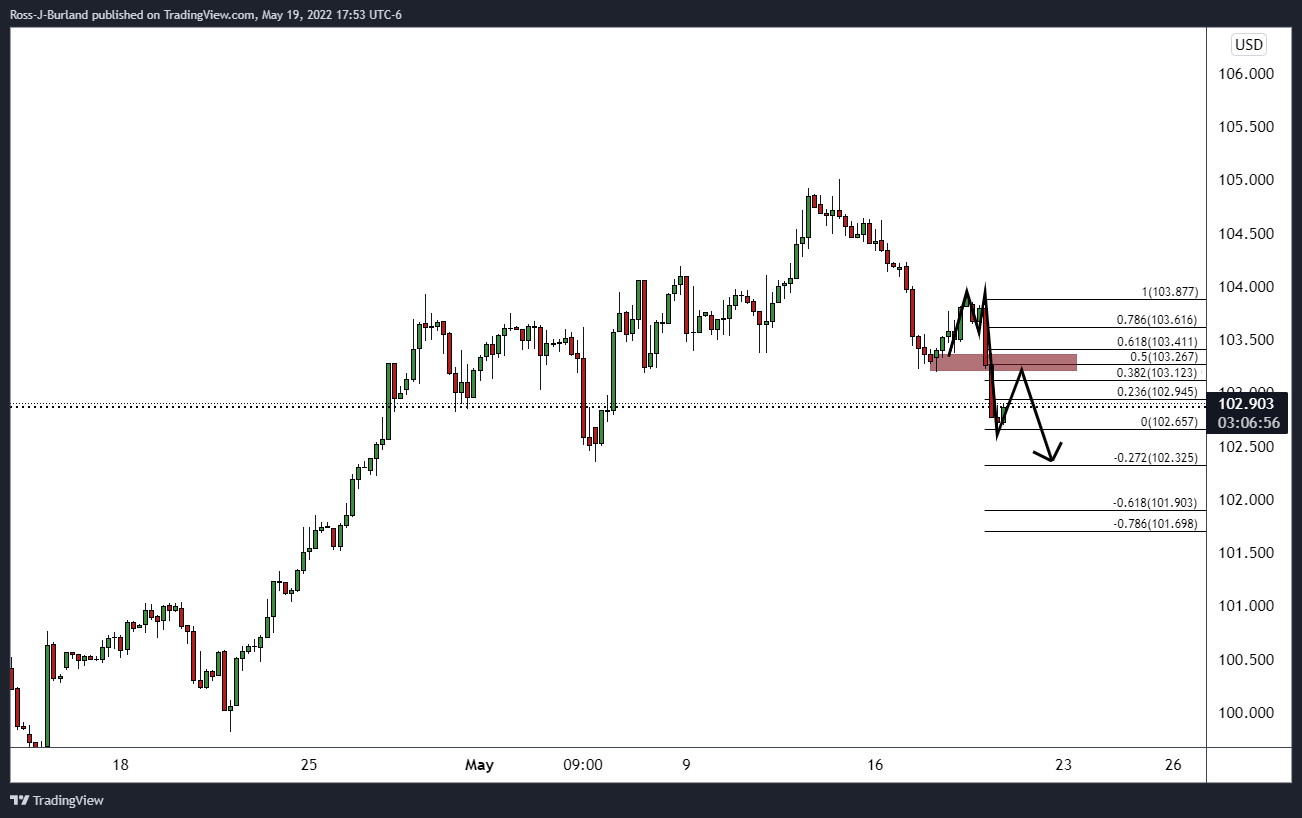 The four-hour chart is bullish while the price corrects from the lows within an overextended M-formation which opens the risk of a deeper retracement towards a 50% mean reversion towards 103.267.