The USD/CAD snaps five days of consecutive losses amid a risk-on market mood. At the same time, oil prices ease from around $115.00, thus weighing on the Loonie, as the greenback reflects recent hawkishness from Federal Reserve policymakers, led by Fed’s Chair Powell saying that a 50 bps increase is on the cards, aligned with Fed hawks Bullard, Bostic, Waller, and Barkin. At the time of writing, the USD/CAD is trading at 1.2611.

Meanwhile, European and US equities keep trading in the green, while the DXY retraced from daily highs near the 99.00 mark around 98.481, up some 0.01%. Meanwhile, US Treasury yields are surging, in the day, as market players begin to price in hikes of the US central bank. Worth noting that the yield in 5s at 2.380% is higher than the 10-year T-note yield at 2.368%, something that USD/CAD traders need to be aware of.

The US economic docket featured more Fed speaking. St. Louis Fed’s James Bullard said that the Fed needs to get policy-neutral, saying that “faster is better” and reiterated that 50 basis points increases would be in the mix.

The Canadian economic docket featured the Producer Price Index for February monthly, which rose 3.1%, higher than January’s 2.5%, while the Raw Materials Prices increased by 29.8%, but lower than the previous reading at 30.5%.

The USD/CAD just crossed below the 200-day moving average (DMA) at 1.2607, additionally to the 50-DMA crossing under the 100-DMA, each located at 1.2681 and 1.2687, respectively. Also, on March 18, the USD/CAD broke an upslope trendline, drawn from late January, support which once broken exposed the abovementioned 200-DMA. 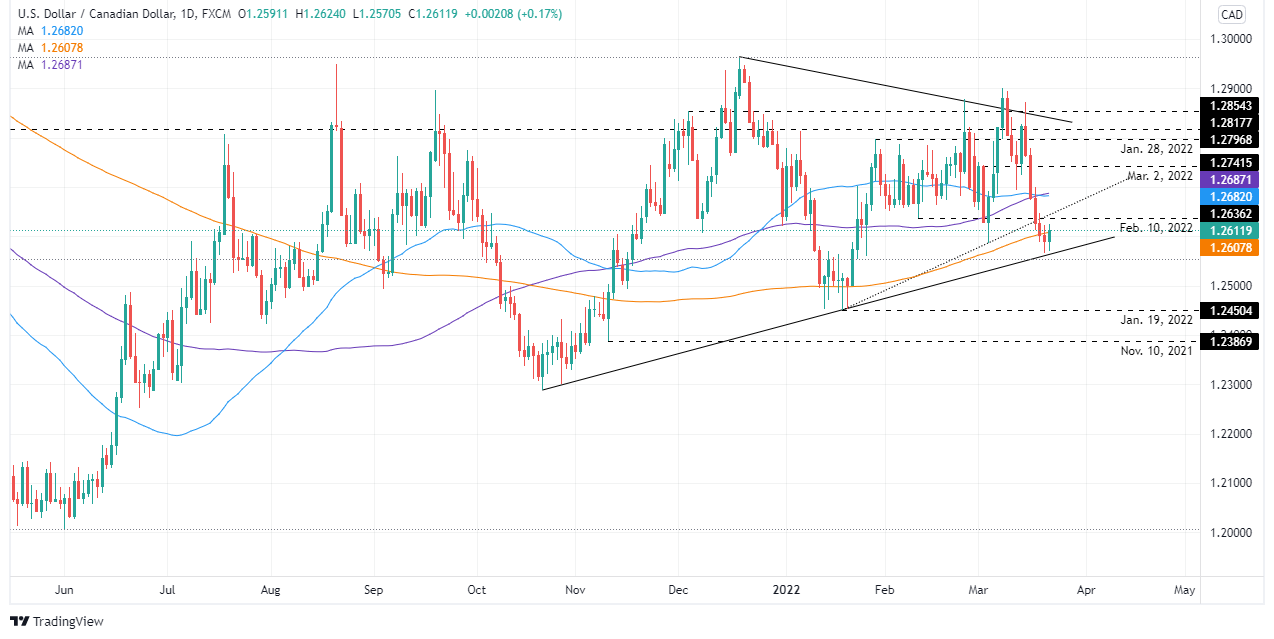