The USD/CAD extends its losses in the week, however it appears to face strong support around the 1.2500 mark, amid a mixed market mood, “hawkish” Fed policymakers,  and two North-American-based banks, expecting two consecutive 50 bps increases by the US central bank in the May and June meetings. At the time of writing, the USD/CAD is trading at 1.2509.

The market sentiment remains fragile, though mixed as portrayed by US equities fluctuating, while European bourses stay in the green. The greenback is trading softer, as reflected by the US Dollar Index down 0.13%, at 98.660, while US Treasury yields keep portrays Fed’s hawkishness, with the 10-year T-note yield up eleven basis points, sitting at 2.453%.

The Russia – Ukraine war issues keep influencing the market mood, though on a lower note. The Russian negotiator said that Ukraine and Russia have agreed on secondary matters, but about primary issues, discussions languished. Meanwhile, the US and Europe reached an LNG (Liquified Natural Gas) agreement to cut the Eurozone dependence on Russia.

Oil prices eased from daily highs towards $110.25 on the headline, putting a lid on the Canadian dollar rise vs. the US Dollar.

Elsewhere, Goldman Sachs and Citigroup are the two mentioned banks in the first paragraph, which expect at least two 50-bps increases in the May and June meetings. Furthermore, in a note to clients, Citigroup said that they expect four 50-bps increases to the Federal Funds Rate in 2022.

The economic docket for Canada has the Budget Balance for January, and the Bank of Canada Governor Kozicki would cross wires. On the US front, Fed speaking continues with the New York Fed President John Williams also backing up a 50 bps increase, and he stated, “If it is appropriate to raise by 50 basis points at a meeting, I will do that.”

Also, Pending Home Sales for February shrank 4.1% from a 1% m/m increase expected. Furthermore, the University of Michigan Consumer Sentiment Final for March came at 59.4 from 59.7, while inflation expectations stayed at 5.4% vs. 4.9% on the previous report.

The USD/CAD fall extends in the week, though as appreciated by the 1-hour chart, the USD/CAD seems to have reached solid support at the 1.2500 area. Additionally, the Relative Strength Index (RSI), a momentum indicator, is at 38.31, though at a bearish area, shows a positive divergence with USD/CAD price action, suggesting that a move upwards might be on the cards. 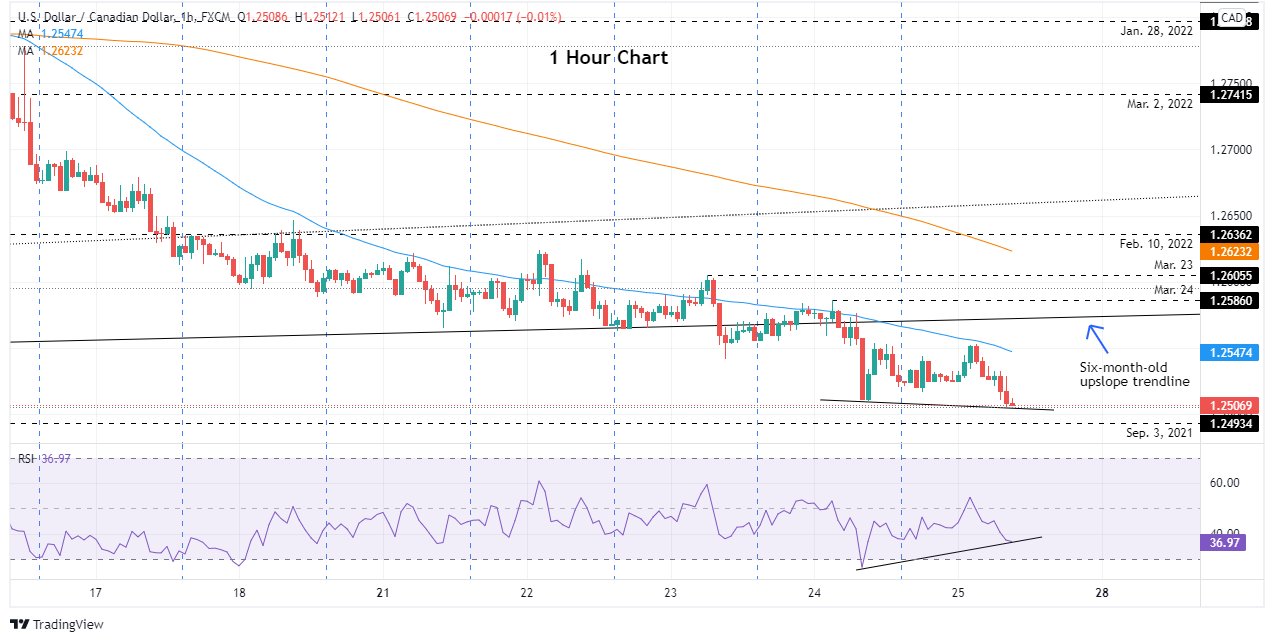