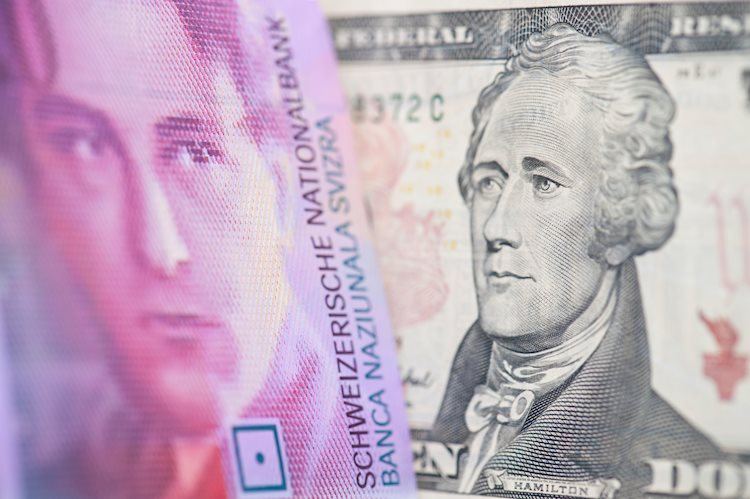 The USD/CHF pair climbed to the highest level since March 2020 during the first half of the European session and is now looking to build on the momentum beyond the 0.9800 mark.

The pair prolonged its recent strong bullish trajectory witnessed over the past one month or so and gained some follow-through traction on Wednesday. The prospects for a more aggressive policy tightening by the Fed continued acting as a tailwind for the US dollar. Apart from this, a positive tone around the US equity futures undermined the safe-haven Swiss franc and extended some support to the USD/CHF pair.

Investors seem convinced that the US central bank would adopt a more aggressive policy response to curb soaring inflation and lift the benchmark interest rate to around 3.0% by the end of the year. This was reinforced by elevated US Treasury bond yields, which, in turn, assisted the USD to hold steady near the multi-year high. The USD bulls, however, preferred to wait for the outcome of a two-day FOMC policy meeting.

The Fed is scheduled to announce its monetary policy decision later during the US session and is widely expected to raise interest rates by 50 bps. The US central bank is also anticipated to outline plans to start shrinking its massive, a near $9 trillion balance sheet at a likely pace of $95 billion a month. Moreover, Fed Chair Jerome Powell’s comments will offer clues about the pace of future policy tightening.

This, in turn, will play a key role in influencing the near-term USD price dynamics and provide a fresh directional impetus to the USD/CHF pair. In the meantime, traders will take cues from the release of the US ADP report on private-sector employment and the ISM Services PMI. The immediate market reaction, however, is more likely to be short-lived, warranting some caution before placing aggressive bets.