The USD/JPY extends to 20-year highs and eyes to reach the 130.00 mark, during the North American session, amidst a mixed session, with global equities fluctuating, bond yields rising, and commodities down. At the time of writing, the USD/JPY is trading at 128.71.

Geopolitical issues like Ukraine-Russo tussles keep weighing on market mood. Peace talks between both parties are on hold as the Russian Foreign Minister Lavrov said that another stage of the operation is beginning. Meanwhile, Fed speaking maintains the US dollar buoyant. On Monday, St. Louis Fed President Bullard noted that inflation is “far too high for comfort” and added that Fed officials want to get to neutral rates expeditiously.

The market reacted to the headlines, pushing the US 10-year Treasury yield upwards. The 10-year benchmark note sits at 2.917%, up six basis points at the time of writing, while the US Dollar Index, a gauge of the greenback value, trades with gains, up 0.12%, at 100.947.

It’s worth noting that the 10-year Real yield reached -0.04% during the day, its highest level since pre-pandemic levels, and is poised to move into positive territory.

Aside from this, the USD/JPY is underpinned by US Treasury yields. Also, the central bank divergence between the ultra-loose accommodative policy of the Bank of Japan (BoJ), contrarily to the Fed, weakens the JPY. Efforts of verbal intervention by the Minister of Finance Suzuki and BoJ Governor Kuroda were mainly ignored by market players, as the USD/JPY rose almost 200-pips throughout the trading session.

Data-wise, the Japanese docket revealed Industrial Production data, which came better than expected, though it failed to give a fresh impetus to the yen. Meanwhile, housing economic data print was positive in the US, but it remains in the backseat as the Fed is focused on inflation.

The USD/JPY monthly chart depicts the pair as upward biased. The break of a 20-year-old downslope resistance trendline opened the door towards February 2002 cycle highs at 135.02, but there would be some hurdles to overcome on its way up.

The USD/JPY’s first resistance would be May 2002 highs at 129.09. A breach of the latter would expose the widely mentioned 130.00 mark by the former top currency diplomat Eisuke Sakakibara, known as “Mr. Yen” who said that “Japan should intervene in the currency market or raise interest rates to defend the yen if it weakens beyond 130.” 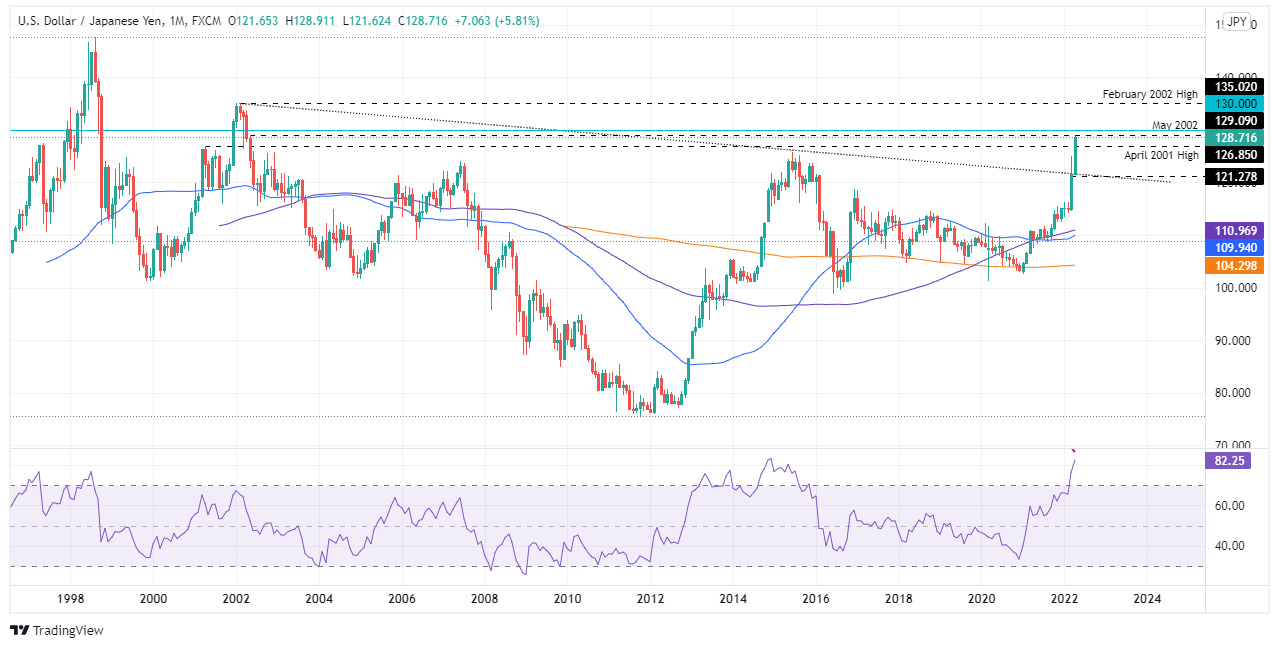