Here is what you need to know on Wednesday, April 13:

Just when you thought it was safe to go back into the water, the PPI rears up to take another bite out of your portfolio. On Tuesday the CPI print was high yes but not shockingly so and actually, the core number came in slightly lower than expected. Equities attempted to rally but an afternoon sell-off put paid to that. Wednesday’s PPI was expected to be a non-event by comparison but instead it rockets higher. The core number came in double what was expected. Futures took an immediate leg lower before recovering to now basically trade flat. Bond yields spiked higher before also reversing so perhaps this one will get overlooked. We doubt it but we have pointed out how bond positioning is now all one way so it may be time to watch for a short squeeze in the bond market. This underreaction is further evidence of that. We see bond yields dropping in the next few weeks.

Delta Airlines (DAL) up on EPS beat despite revenue missing.

Paypal (PYPL) down on CFO departure. 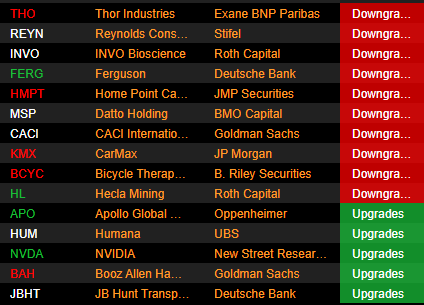