Here is what you need to know on Friday, May 13:

Friday the 13th is not a welcome date. Markets have taken enough of a fright of late, thank you very much. The environment has totally soured, but we finally noted some relief late on Thursday. For starters, retail came back, and riskier stocks began to rally. AMC and GameStop (GME) both closed up around the 10% mark. Then we had a 2% intraday turnaround from the Nasdaq and S&P, which nearly got us a close in the green. The dollar also is flat and bond yields have given up some ground. Bitcoin also regained some sanity and is back above $30,000 after a tumultuous week for crypto.

The big news of course is Elon Musk putting the Twitter (TWTR) deal on hold. Seems a lame excuse, but who are we to argue. Twitter has naturally dumped, while Tesla has rallied somewhat. That may hit sentiment as deals being put on hold are not a good indicator of the health of the market. This would have got done in the blink of an eye one year ago.

Powell sticks to 50 bps hikes for now but does not guarantee a soft landing, duh!

Twitter (TWTR): Elon Musk tweets that deal is on hold.

Affirm (AFRM) spikes over 30% on positive guidance and earnings.

Robinhood (HOOD) up 20% on stake by FTX founder.

Microstrategy (MSTR) up 12% on Bitcoin bounce.

RIOT and MARA up on Bitcoin bounce.

UPS down after JPMorgan downgrade.

Samsung (SSNLF) is talking with clients about a 20% semiconductor chip price hike-Bloomberg. 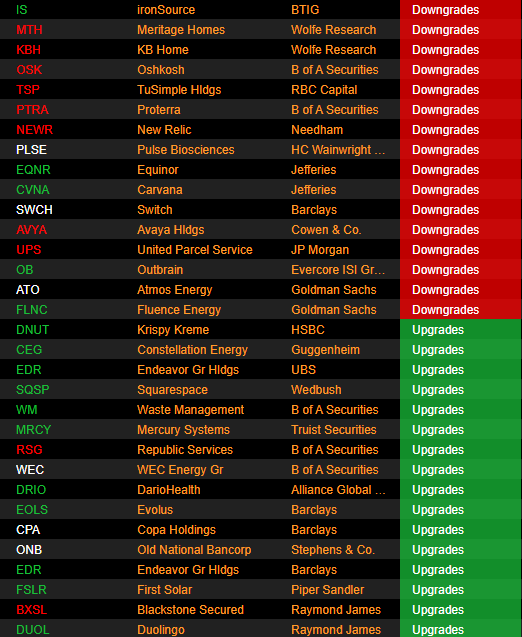 The author is short Tesla and Twitter and long IUSA